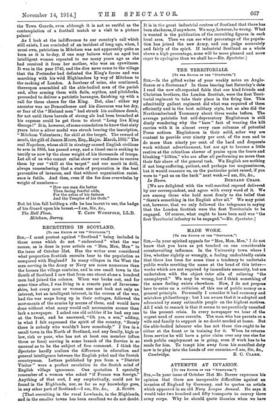 [To THE EDITOR Or TH2 " SPECTATOR."] SIR,—I must protest against "Scotland" being included in those areas which do not " understand " what the war means, as is done in your article on " Men, Men, Men " in the issue of October 31st. Has the writer ever considered what proportion Scottish recruits bear to the population as compared with England P In many villages in the West the men serving in the Army or Navy are more numerous than the houses the village contains, and in one small town in the South of Scotland I saw that from one street alone a hundred men had joined the colours. When war broke out, and for some time after, I was living in a remote part of Inverness- shire, but every man or woman one met took not only an interest, but an intelligent interest, in the course of the war, had the war maps bung up in their cottages, followed the momments of the armies by means of them, and would have done without what many would call necessaries sooner than lack a newspaper. I asked one old cobbler if he had any one at the front, and he answered, " Oh yes, a son," adding, in what I felt expressed the spirit of the country, "Surely there is nobody who wouldn't have somebody." I live in a small town in the North of Scotland, and any family, high or low, rich or poor, who has not at least one member (often three or four) serving in some branch of the Service is so unusual as to be the subject of free comment. I think the Spectator hardly realizes the difference in education and general intelligence between the English yokel and the Scotch countryman. Letters published by you from a "District Visitor" were a perfect revelation to the Scotch mind of English village ignorance. One quotation I specially remember of a woman who asked " if France was foreign." Anything of that sort, I say emphatically, could not be found in the Highlands, nor, as far as my knowledge goes, in any other part of Scotland.—I am, Sir, &c., A. Scorr. [That recruiting in the rural Lowlands, in the Highlands, guad in the smaller towns has been excellent we do not doubt.

It is in the great industrial centres of Scotland that there has been slackness, if anywhere. We may, however, be wrong. What is wanted is the publication of the recruiting figures in each local area. Then we can see what percentage of the popula- tion has joined the new Army, and can judge accurately and fairly of the spirit. If industrial Scotland as a whole shows a high percentage, none will be more pleased and more eager to apologize than we shall be.—ED. Spectator.]