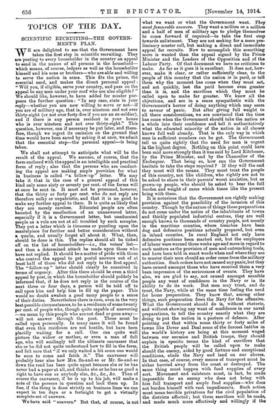 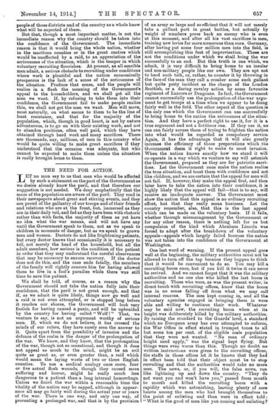 WE are delighted to see that the Government have taken the first step in scientific recruiting. They are posting to every householder in the country an appeal to send in the names of all persons in the household— 'which means, of course, lodgers as well as the householder himself and his sons or brothers—who are able and willing to serve the nation in arms. This fits the prime, the essential need, and makes the direct personal appeal : "Will you, if eligible, serve your country, and pass on the appeal to any men under your roof who are also eligible ? " We should like, however, to have added for muster pur- poses the further question : " In any case, state in your reply—whether you are now willing to serve or not—if you are of military age, that is, over nineteen and not over thirty-eight (or not over forty-five if you are an ex-soldier), and if there is any person resident in your house who is over nineteen and not over thirty-eight." This question, however, can if necessary be put later, and there- fore, though we regret its omission on the ground that time would have been saved by asking it at once, we admit that the essential step—the personal appeal—is being taken.

We shall not attempt to anticipate what will be the result of the appeal. We assume, of course, that the form enclosed with the appeal is an intelligible and practical form of reply ; also that the persons who are conduct- ing the appeal are making ample provision for what in business is called "a follow-up" letter. We may take it that in the case of a general appeal of this kind only some sixty or seventy per cent. of the forms will at once be sent in. It must not be presumed, however, that the thirty or forty per cent. who do not reply are therefore sulky or unpatriotic, and that it is no good to make any further appeal to them. It is quite as likely that they are merely careless. Educated people are often haunted by the recollection of an unanswered letter, especially if it is a Government letter, but uneducated people as a rule are not at all troubled by such scruples. They put a letter which is tiresome or puzzling upon the mantelpiece for further and better consideration without a qualm, and usually forget all about it. What, then, should be done is this. The replies should all be ticked off on the list of householders—i.e., the voters' list— and then a determined attack be made upon those who have not replied. It should be a matter of pride with those who control the appeal to get postal answers out of at least half of those who did not reply to the first appeal. The " follow-up " letter should clearly be conceived in terms of urgency. After this there should be even a third appeal by post, in which the householder should politely be informed that, if he does not reply in the course of the next three or four days, a person will be told off to call upon him and help him to fill up the paper. This would no doubt awaken a good many people to a sense of their duties. Nevertheless there is sure, even in the very best possible circumstances, to be a residuum of some twenty per cent. of people who, though quite capable of answering —we mean by this people who are not dead or gone away— will not answer through the post. These must be called upon personally. In many cases it will be found that even this residuum are not hostile, but have been placidly waiting for a call. One can quite well picture the widow or mother, or even a man of full age, who will smilingly tell the ultimate canvasser that she or he did not quite understand how to fill in the form, and felt sure that " if we only waited a bit some one would be sure to come and fetch it." The canvasser will probably bear also bow Mrs. So-and-so or Mr. So-and-so down the road has been quite upset because she or he has never bad a paper at all, and thinks she or he has as good a right to have one as anybody else, &c., &c., &c. Then of course the canvasser, if he is up to his job, will make a note of the persons in question and look them up. In fine, if the thing is done strictly on business lines we can expect in ten days or a fortnight to get a virtually complete set of answers.

We have said " answers." But that, of course, is not what we want or what the Government want. They want favourable answers. They want a million or a million and a half of men of military age to pledge themselves to come forward if required—to take the first step towards enlistment. They are not seeking for a mere pre- liminary muster roll, but making a direct and immediate appeal for recruits. Now to accomplish this something more is wanted than the appeal signed by the Prime Minister and the Leaders of the Opposition and of the Labour Party. Of that document we have no criticism to make. As far as it goes it is excellent. It does not, how- ever, make it clear, or rather sufficiently clear, to the people of this country that the nation is in peril, or tell them why the moment has come when they must act, and act quickly, lest the peril become even greater than it is, and the sacrifices which they must be called upon to make far greater. We know all the objections, and are in a sense sympathetic with the Government's horror of doing anything which may seem to savour of panic. But after giving full weight to all these considerations, we are convinced that the time has come when the Government should take the nation as a whole into their confidence and tell it authoritatively what the educated minority of the nation in all classes knows full well already. That is the only way in which men in sufficient numbers can be got. The Government tell us quite rightly that the need for men is urgent in the highest degree. Nothing on this point could havo been said more strongly than it was said by Lord Kitchener, by the Prime Minister, and by the Chancellor of the Exchequer. That being so, how can the Government hesitate to take the steps required ? If they will the end they must will the means. They must treat the people of this country, not like children, who rightly are not to be asked to share in their parents' worst anxieties, but as grown-up people, who should be asked to bear the full burden and weight of cares which times like the present bring with them. It is notorious that the Government are rightly making provision against the possibility of the invasion of this country. Though by the nature of things these preparations do not come under the notice of the inhabitants of towns and thickly populated industrial centres, they are well enough known to thousands of country people, not merely in the maritime counties, where trenches have been dug and defensive positions actually prepared, but even in inland counties. In rural England not only have defensive positions been marked out, but the employers of labour were warned three weeks ago and more in regard to such matters as the provision of men and entrenching tools, and have been told in exact words when and where they are to muster their men should an order come from the military authorities. Such orders have not caused any panic, but they have caused amongst those who have received them a very keen impression of the seriousness of events. They have also, we are glad to say, not caused amongst sensible people any want of confidence in the Navy or in its ability to do its work. But men may trust, and do trust, the Navy, while at the same time feeling the need for home preparation. They know that, among other things, such preparation frees the Navy for the offensive.

What the Government should do is, without rhetoric, and without showing any want of confidence in our naval preparations, to tell the country exactly what they are doing to put the nation in a posture of defence. After pointing out that within some thirty or forty miles of towns like Dover and Deal some of the fiercest battles in the world's history are being at this moment waged between our enemies and British troops, they should explain in specific terms the kind of sacrifices that the British people will be called upon to make should the enemy, aided by good fortune and exceptional conditions, elude the Navy and land on our shores.

In that case, of course, every means of transport must be either hurried away from the coast or destroyed. The same thing must happen with food supplies of every sort. Movement and existence must, in fact, be made impossible for an enemy who does not bring with him full transport and ample food supplies—who does not burden himself with vast impedimenta. Such action must mean terrible privations for the civil population of the districts affected ; but these sacrifices will be made, and made much more effectively and willingly if the people of those districts and of the country as a. whole know what will be expected of them. But that, though a most important matter, is not the immediate reason why the country should be taken into the confidence of the Government. The immediate reason is that it would bring the whole nation, whether in the maritime counties or in the great centres which would be unaffected by a raid, to an appreciation of the seriousness of the situation, which is the temper in which voluntary recruiting flourishes. At present, as all sensible men admit, a serious obstacle to recruiting under conditions where work is plentiful and the nation economically prosperous is the lack of a sense of the seriousness of the situation. Produce that sense, and the people will realize in a flash the meaning of the Government's appeal to the householders, and we shall get all the men we want. If, by refusing to take them into their confidence, the Government fail to make people realize this, we shall not get the men we want. Men will move, most naturally, on what seems to them to be the line of least resistance, and that for the majority of the population, which, though in good heart, is not by nature adventurous, is to go on with their existing work, and not to abandon positions, often well paid, which they have obtained through hard work and many sacrifices. There are thousands, nay, millions, of men in this country who would be quite willing to make great sacrifices if they understood that the occasion was adequate, but who cannot be expected to make them unless the situation is really brought home to them.