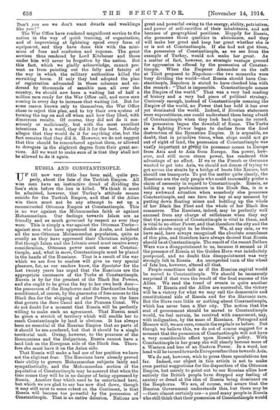 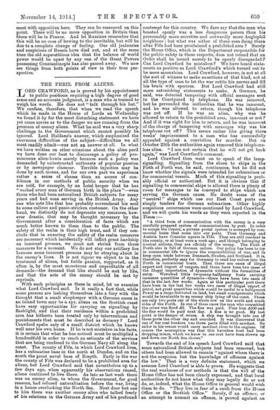 111P till now very little has been said, quite pro- perly, about the fate of the Turkish Empire. All wise men have an instinctive dread of dividing the lion's skin before the lion is killed. We think it must be admitted, however, that Turkey's attitude means suicide for the Turkish Empire, and that if the Allies win there must not be any attempt to set up a reconstructed Ottoman Empire at Constantinople. This is no war against the Mohammedan faith or against Mohammedans. Our feelings towards Islam are as friendly and as much governed by respect as ever they were. This is simply a war against the Ottoman Turks— against men who have oppressed the Arabs, and indeed all the non-Ottoman Mohammedan population, quite as cruelly as they have oppressed their Christian subjects. But though Islam and the Islamic creed must receive every consideration, Ottoman power must cease at Constan- tinople, and, what is more, Constantinople must be placed in the hands of the Russians. That is a result of the war which we are free to confess will give us very special pleasure, for, as our readers know, the Spectator for the last twenty years has urged that the Russians are the appropriate successors of the Turks at Constantinople. Russia is by far the greatest of the Black Sea Powers, and she ought to be given the key to her own back door— the possession of the Bosphorus and the Dardanelles being conditioned, of course, by the guarantee of free access to the Black Sea for the shipping of other Powers, on the lines that govern the Suez Canal and the Panama Canal. We do not doubt for a moment that Russia will be perfectly willing to make such an agreement. That Russia must be given a stretch of territory which will enable her to reach Constantinople by land is obvious. It has always been an essential of the Russian Empire that no parts of it should be sea-sundered, but that it should be a single territorial unit. Owing, however, to the presence of the Roumanians and the Bulgarians, Russia cannot have a land link on the European side of the Black Sea. There- fore she must have it on the Asian side.

That Russia will make a bad use of her position we have not the slightest fear. The Russians have already proved their ability to govern Mohammedan subjects fairly and sympathetically, and the Mohammedan section of the population of Constantinople may be assured that when the time comes they will be in no danger of being oppressed by Russia. Another fear which used to be entertained here, but which we are glad to say has now died down, though it may still exist to some extent on the Continent, is that Russia will become too powerful by the possession of Constantinople. That is an entire delusion. Nations are great and powerful owing to the energy, ability, patriotism, and power of self-sacrifice of their inhabitants, and not because of geographical positions. Happily for Russia, she possesses those qualities in abundance, and they will make her great and keep her great whether she is or is not at Constantinople. If she had not got them, the possession of Constantinople, as we see from the example of Turkey, would not make her great. As a matter of fact, however, no strategic vantage ground for aggression is offered by the possession of Constan- tinople. When the Emperor Alexander on the raft at Tilsit proposed to Napoleon—the two monarchs were busy dividing the world—that Russia should have Con- stantinople, Napoleon is stated to have checked him with the remark : " That is impossible. Constantinople means the Empire of the world." That was a very bad reading of history and a very bad piece of political strategy. Curiously enough, instead of Constantinople meaning the Empire of the world, no Power that has held it has ever yet dominated the world. Indeed, if Russian statesmen were superstitious, one could understand them being afraid of Constantinople when they look back upon its record. Its possession began the downfall of Rome. The Turks as a fighting Power began to decline from the final destruction of the Byzantine Empire. It is arguable, no doubt, that in primitive times, when ships could not go out of sight of land, the possession of Constantinople was vastly important as giving its possessor access to Europe from Asia and to Asia from Europe. Sea power, how- ever, and still more steam power, has rendered this advantage of no effect. If we or the French or Germans wanted to get into Asia, we should not dream of trying to get across the straits by a bridge of boats like Xerxes, but should use transports. To put the matter quite clearly, the Russians are the only people who could reasonably prefer a claim of necessity in regard to Constantinople. Russia, as holding a vast predominance in the Black Sea, is in a very awkward situation when somebody else possesses Constantinople, and can turn the key at any moment by putting down floating mines and bottling up the whole of her Black Sea Fleet and the whole of her Black Sea commerce. The Russians, indeed, may be perfectly well excused from any charge of selfishness when they say that the possession of Constantinople is vital to them, and is vital to no other Power, and that therefore the city and the double straits ought to be theirs. We, at any rate, as we have said, have always recognized the absolute soundness of this plea, and therefore have always desired that Russia should be at Constantinople. The result of the recent Balkan Wars was a disappointment to us, because it seemed as if the presence of Russia at the Golden Horn was indefinitely postponed, and no doubt this disappointment was very strongly felt in Russia. An unexpected turn of the wheel of fate has, however, altered all that.

People sometimes talk as if the Russian capital would be moved to Constantinople. We should be immensely surprised if that were the result of the final success of the Allies. We read the trend of events in quite another way. If Russia and the Allies are successful, the victory will be a victory for what we may call the democratic and constitutional side of Russia and for the Slavonic race. But the Slays care little or nothing about Constantinople, which has never been a Slav city. The notion that the seat of government should be moved to Constantinople would, we feel certain, be received with amazement, nay, with indignation, by the mass of Russians. Petrograd and Moscow will, we are sure, remain the capitals as before. But though we believe this, we do not of course suggest for a moment that the possession of Constantinople will not have a very considerable effect upon Russia's policy. With Constantinople in her grasp she will clearly become more of a Western and less of an Eastern Power. In a word, her head will be turned towards Europerather than towards Asia.

We do not, however, wish to press these speculations too far. Indeed, our object in this article is not to make even partial suggestions for the disposition of the Ottoman Empire, but merely to point out to our Russian allies how entirely the British people have dropped any feeling of anxiety or dread at the idea of Russia being dominant on the Bosphorus. We are, of course, well aware that the Russian Government understands this, but there may be —there almost certainly are—a good many people in Russia who still think that their possession of Constantinople would meet with opposition here. They can be reassured on this point. There will be no more opposition in Britain than there will be in France. And let Russians remember that this will be no case of bowing to the inevitable, but will be due to a complete change of feeling. Our old jealousies and suspicions of Russia have died out, and at the same time the old superstitious idea that the balance of world power would be upset by any one of the Great Powers possessing Constantinople has also passed away. We now see things from both points of view in their true per- spective.