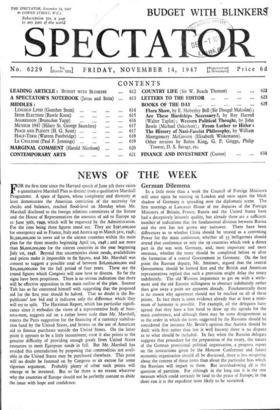 FOR the first time since the Harvard speech of June 5th there exists a quantitative Marshall Plan as distinct from a qualitative Marshall Programme. A spate of figures, whose complexity and diversity at least demonstrate the American conviction of the necessity for checks and balances, reached flood-level on Monday when Mr. Marshall disclosed to the foreign relations committees of the Senate and the House of Representatives the amounts of aid to Europe up to June 3oth, 1949, which will be requested by the Administration. For the time being three figures stand out. They are $597,000,000 for emergency aid to France, Italy and Austria up to March 31st, :948; $i,soo,000,000 to cover aid to the sixteen countries within the main plan for the three months beginning April 1st, 1948 ; and not more than $6,00o,000,000 for the sixteen countries in the year beginning July 1st, 1948. Beyond that uncertainties about needs, availabilities and prices make it impossible to fix figures, and .Mr. Marshall was content to suggest a possible total of between $16,000,000,000 and $2o,000,000,000 for the full period of four years. These are the round figures which Congress will now have to discuss. So far the signs have been propitious. There is no serious indication that there will be effective opposition to the main outline of the plan. Senator Taft has so far contented himself with suggesting that the proposed aid for the first year should be halved. That no doubt is the Re- publicans' low bid and it indicates only the difference which they will try to split. The Harriman Report, which has particular signifi- cance since it embodies the views of a representative body of busi- ness-men, suggests aid on a rather lower scale than Mf. Marshall, rejects the Paris suggestion for the financing of a currency stabilisa- tion fund by the United States, and frowns on the use of American aid to finance purchases outside the United States. On the latter point it appears to be a little inconsistent, since it also points to the genuine difficulty of providing enough goods from United States resources to meet European needs in full. But Mr. Marshall has avoided this contradiction by proposing that commodities not avail- able in the United States may be purchased elsewhere. This point will no doubt be fastened on by Congress as an excuse for some vigorous argument. Probably plenty of other such points will emerge or be invented. But so far there is no reason whatever why the countries of Europe should not be perfectly content to abide the issue with hope and confidence.