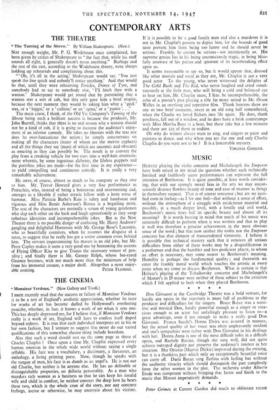 "The Taming of the Shrew." By William Shakespeare. (New.) Nor enough weight, Mr. P. G. Wodehouse once complained, has been given by critics of Shakespeare to " the fact that, while his stuff sounds all right, it generally doesn't mean anything." Burbage and the rest of the cast, according to the Wodehouse theory, were always holding up rehearsals and complaining about this.

" Oh, it's all in the acting,' Shakespeare would say. ' You just speak the line quick and nobody'll notice anything.' And that would be that, until they were rehearsing Pericles, Prince of Tyre, and somebody had to say to somebody else, ' I'll fetch thee with a wanton.' Shakespeare would get round that by pretending that a wanion was a sort of cab, but this only gave him a brief respite, because the next moment they would be asking him what a geck ' was, or a loggat,' or a cullion,' or an egma,' or a punto . ." The main cause, I think, of the Old Vic Company's Taming of the Shrew being such a brilliant success is because the producer, Mr. John Burrell, thinks that there is no real reason why a wanion should not be a kind of cab, if it is going to increase the audience's enjoy- ment of an inferior comedy. He takes no liberties with the text nor does he over-fantasticate the action ; he simply concentrates on making all the characters (many of whom are the merest cyphers) and all the things they say (many of which are uncomic and obscure) as amusing as they can possibly be. The result is to convert the play from a creaking vehicle for two stars into a well-knit entertain- ment wherein, by some ingenious alchemy, the lifeless puppets and the pointless jokes are made—for the first time in my experience— to yield compelling and continuous comedy. It is really a very remarkable achievement.

He owes, of course, almost as much to his company as they owe to him. Mr. Trevor Howard gives a very fine performance as Petruchio, who, instead of being a boisterous and overweening cad, emerges as a likeable if rather erratic fellow with a keen sense of humour. Miss Patricia Burke's Kate is sultry and handsome and vigorous and Miss Renee Asherson's Bianca is a beguiling minx. The rest of the characters are normally a scrum of young gentlemen who slap each other on the back and laugh uproariously as they swop nebulous identities and incomprehensible jokes. But at the New Theatre there is no possible danger of confusing Mr. Harry Andrews' gangling and delightful Hortensio with Mr. George Rose's Lucentio, who 'so beautifully contrives, when he assumes the disguise of a tutor, to suggest that he really has got a senior common room behind him. The servant impersonating his master is an old joke, but Mr. Peter Copley makes it seem a very good one by borrowing the accents of Flying Officer Kite to give Tranio the necessary veneer of gen- tility ; and finally there is Mr. George Relph, whose bat-eared Grumio becomes, with not much more than the minimum of help from his immortal creator, a major droll. Altogether a most enjoy-