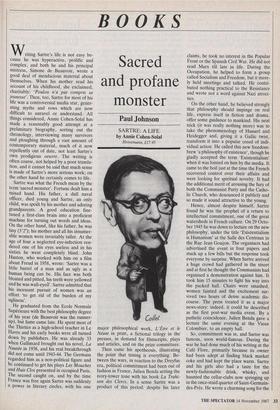 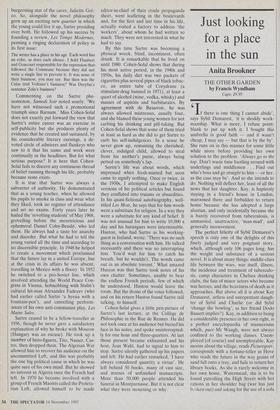 SARTRE: A LIFE by Annie Cohen-Solal

Writing Sartre's life is not easy be- cause he was hyperactive, prolific and complex, and both he and his principal mistress, Simone de Beauvoir, wrote a good deal of mendacious material about themselves. When his mother read his account of his childhood, she exclaimed, charitably: Toulou n'a pas compris sa jeunesse'. Then, too, Sartre for most of his life was a controversial media star, gener- ating myths and rows which are now difficult to unravel or understand. All things considered, Annie Cohen-Solal has made a reasonably good attempt at a preliminary biography, sorting out the chronology, interviewing many survivors and ploughing through a vast amount of contemporary material, much of it now repellently out of date, not least Sartre's own prodigious oeuvre. The writing is often coarse, not helped by a poor transla- tion, and it cannot be said that much sense is made of Sartre's more serious work; on the other hand he certainly comes to life.

Sartre was what the French mean by the term 'sacred monster'. Fortune dealt him a mixed hand. His father, a dull naval officer, died young and Sartre, an only child, was spoilt by his mother and adoring grandparents. A good education fine- tuned a first-class brain into a proficient machine for turning out words and ideas. On the other hand, like his father, he was tiny (5'2"); his mother and all his innumer- able women were invariably taller. At the age of four a neglected eye-infection ren- dered one of his eyes useless and in his sixties he went completely blind. John Huston, who worked with him on a film about Freud in 1958, wrote: 'Sartre was a little barrel of a man and as ugly as a human being can be. His face was both bloated and pitted, his teeth were yellowed and he was wall-eyes'. Sartre admitted that his incessant pursuit of women was an effort `to get rid of the burden of my ugliness'.

He graduated from the Ecole Normale Superieure with the best philosophy degree of his year (de Beauvoir was the runner- up), but fame came late. He spent most of the Thirties as a high-school teacher in Le Havre and his early books were all turned down by publishers. He was already 33 when Gallimard brought out his novel, La Nausee in 1938, and his real breakthrough did not come until 1943-44. The Germans regarded him as a non-political figure and he continued to get his plays Les Mouches and Huis Clos presented in occupied Paris. The second caught on, and by the time France was free again Sartre was suddenly a power in literary circles, with his one major philosophical work, L'Etre et le Neant in print, a fictional trilogy in the presses, in demand for filmscripts, plays and articles, and on the prize committees.

Then came his apotheosis, illustrating the point that timing is everything. Be- tween the wars, in reaction to the Dreyfus era, political commitment had been out of fashion in France, Julien Benda setting the ivory-tower tone with his book La Trahi- son des Clercs. In a sense Sartre was a product of this period: despite his later claims, he took no interest in the Popular Front or the Spanish Civil War. He did not read Marx till late in life. During the Occupation, he helped to form a group called Socialism and Freedom, but it mere- ly held meetings and talked. He contri- buted nothing practical to the Resistance and wrote not a word against Nazi atroci- ties.

On the other hand, he believed strongly that philosophy should impinge on real life, express itself in fiction and drama, offer some guidance to mankind. His neat trick (it was really nothing more) was to take the phenomenology of Husserl and Heidegger and, giving it a Gallic twist, transform it into a popular creed of indi- vidual action. He called this new freedom- brew 'a philosophy of existence', though he gladly accepted the term 'Existentialism' when it was foisted on him by the media. It came to the boil just at the time the French recovered control over their affairs and were looking for spiritual novelty. It had the additional merit of arousing the fury of both the Communist Party and the Catho- lic Church, who denounced it publicly and so made it sound attractive to the young.

Hence, almost despite himself, Sartre found he was the prophet of a return to intellectual commitment, one of the great watersheds in French culture. On 29 Octo- ber 1945 he was down to lecture on the new philosophy, under the title 'Existentialism is Humanism' at the Salle des Centraux in the Rue Jean Goujon. The organisers had advertised the event in four papers and stuck up a few bills but the response took everyone by surprise. When Sartre arrived a huge crowd had gathered in the street and at first he thought the Communists had organised a demonstration against him. It took him 15 minutes to fight his way into the packed hall. Chairs were smashed, women fainted and the excitement sur- vived two hours of dense academic dis- course. The press treated it as a major news-story: indeed, it could be described as the first post-war media event. By a pathetic coincidence, Julien Benda gave a lecture the same evening at the Vieux Colombier, to an empty hall.

So, commitment was in, and Sartre was famous, soon world-famous. During the war he had done much of his writing at the Café Flore, primarily because its owner had been adept at finding black market coke and had kept the place warm. Sartre and his girls also had a taste for the newly-fashionable drink, whisky, and haunted the cellar-clubs now springing up in the once-staid quarter of Saint-Germain- des-Pres. He wrote a charming song for the burgeoning star of the caves, Juliette Gre- co. So, alongside the novel philosophy grew up an exciting new quartier in which the young could live it up, Sartre presiding over both. He followed up his success by founding a review, Les Temps Modernes, penning a ringing declaration of policy in its first issue:

The writer has a place in his age. Each word has an echo, as does each silence. I hold Flaubert and Goncourt responsible for the repression that- followed the Commune because they did not write a single line to prevent it. It was none of their business, you may say. But then was the Calas trial Voltaire's business? Was Dreyfus's sentence Zola's business?

Commenting on the Sartre phe- nomenon, Samedi Soir noted sourly: 'We have not witnessed such a promotional triumph since Barnum.' Miss Cohen-Solal does not exactly put forward the view that Sartre's entire career was an exercise in self-publicity but she produces plenty of evidence that he created and sustained, by his considerable literary earnings, a de- voted circle of admirers and flunkeys who saw to it that his name and work were continually in the headlines. But for what serious purpose? It is here that Cohen- Solal fails to discern any continuous thread of belief running through his life, probably because none exists.

It is true that Sartre was always a subverter of authority. He demonstrated that as a young teacher, when he allowed his pupils to smoke in class and wear what they liked, took no register of attendance and set no exams. Forty years later he hailed the 'revolting students' of May 1968, grovelling before the meretricious and ephemeral Daniel Cohn-Bendit, who led them. He always had a taste for anarchy and disorder. But what he had to tell the young varied all the time and according to no discernible principle. In 1948 he helped to create a movement which proclaimed that the future lay in a united Europe, but at the crisis in its affairs he was absent, travelling in Mexico with a floozy. In 1952 he switched to a pro-Soviet line, which involved attending the World Peace Con- gress in Vienna, hobnobbing with Stalin's cultural hit-man Alexander Fadeyev (who had earlier called Sartre 'a hyena with a fountain-pen'), and cancelling perform- ances of his own anti-communist play, Les Mains Sales.

Sartre ceased to be a fellow-traveller in 1956, though he never gave a satisfactory explanation of why he broke with Moscow (Hungary was an excuse). He took up a number of hero-figures, Tito, Nasser, Cas- tro, then dropped them. The Algerian War allowed him to recover his audience on the uncommitted Left, and this was probably the one big political cause in which he was quite sure of his own mind. But he showed no interest in Algeria once the French had left. In 1970 he became involved with a group of French Maoists called the Proleta- • rian Left, allowed himself to be made editor-in-chief of their crude propaganda sheet, went leafleting in the boulevards and, for the first and last time in his life, actually visited a factory to address 'the workers', about whom he had written so much. They were not interested in what he had to say.

By this time Sartre was becoming a physical wreck, blind, incontinent, often drunk. It is remarkable that he lived on until 1980. Cohen-Solal shows that during his most active period, in the 1940s and 1950s, his daily diet was two packets of cigarettes plus several pipes of black tobac- co, an entire tube of Corydrane (a stimulant-drug banned in 1971), at least a quart of alcohol (wine, vodka, whisky) and masses of aspirins and barbiturates. By agreement with de Beauvoir, he was always allowed mistresses, usually four, and she blamed these young women for not curbing his drinking and pill-taking. But Cohen-Solal shows that some of them tried at least as hard as she did to get Sartre to curb his self-indulgences. In a sense he never grew up, remaining the cherished, clever, indulged child, allowed to steal from his mother's purse, always being petted on somebody's lap.

Sartre's life was about words, which impressed when fresh-minted but soon came to signify nothing. Once or twice, in the 1950s, I attempted to make English versions of his political articles but found they conflated into truisms or absurdities. In his quasi-fictional autobiography, well- titled Les Mots, he says that for him words were a substitute for religion. In a way they were a substitute for any kind of belief. It was not unusual for him to write 10,000 a day and his harangues were interminable. Huston, who had Sartre as his working- guest in Ireland, wrote: 'There was no such thing as a conversation with him. He talked incessantly and there was no interrupting him. You'd wait for him to catch his breath, but he wouldn't. The words came out in an absolute torrent.' What amazed Huston was that Sartre took notes of his own chatter. Sometimes, unable to bear the endless French periods, few of which he understood, Huston would leave the room. But the drone of the voice followed, and on his return Huston found Sartre still talking, to himself.

Cohen-Solal gives a little pen-picture of Sartre's last lecture, at the College de Philosophie in the Rue de Rennes. He did not look once at his audience but buried his face in his notes, and spoke uninterrupted- ly for one hour and three-quarters. At last those present became exhausted and his host, Jean Wahl, had to signal to him to stop. Sartre silently gathered up his papers and left. He had earlier remarked, 'I have always considered quantity a virtue'. He left behind 50 books, many of vast size, and masses of unfinished manuscripts. More than 50,000 people attended his funeral in Montparnasse. But it is not clear what they were mourning or why.