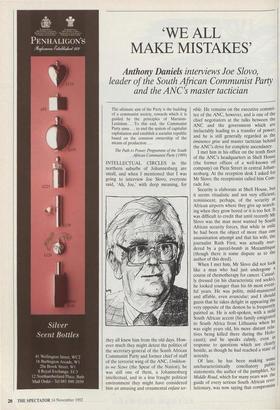 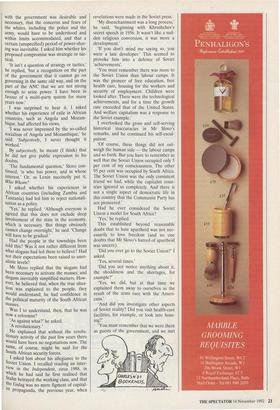 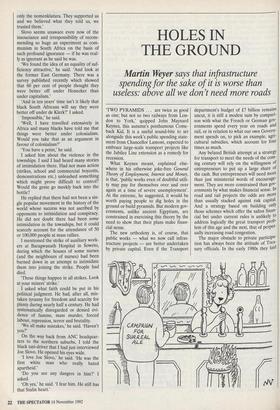 `WE ALL MAKE MISTAKES'

The ultimate aim of the Party is the building of a communist society, towards which it is guided by the principles of Marxism- Leninism ... To this end, the Communist Party aims ... to end the system of capitalist exploitation and establish a socialist republic based on the common ownership of the means of production ...

The Path to Power: Programme of the South African Communist Party (1989)

INTELLECTUAL CIRCLES in the northern suburbs of Johannesburg are small, and when I mentioned that I was going to interview Joe Slovo, everyone said, `Ah, Joe,' with deep meaning, for

they all knew him from the old days. How- ever much they might detest the politics of the secretary-general of the South African Communist Party and former chief of staff of the terrorist wing of the ANC, Umkhon- to we Sizwe (the Spear of the Nation), he was still one of them, a Johannesburg intellectual, and in a less fraught political environment they might have considered him an amusing and ornamental enfant ter- rible. He remains on the executive commit- tee of the ANC, however, and is one of the chief negotiators at the talks between the ANC and the government which are ineluctably leading to a transfer of power; and he is still generally regarded as the eminence grise and master tactician behind the ANC's drive for complete ascendancy. I met him in his office on the tenth floor of the ANC's headquarters in Shell House (the former offices of a well-known oil company) on Plein Street in central Johan- nesburg. At the reception desk I asked for Mr Slovo; the receptionist called him Com- rade Joe.

Security is elaborate at Shell House, but it seems ritualistic and not very efficient, reminiscent, perhaps, of the security at African airports where they give up search- ing when they grow bored or it is too hot. It was difficult to credit that until recently Mr Slovo was the man most wanted by South African security forces, that while in exile he had been the object of more than one assassination attempt and that his wife, the journalist Ruth First, was actually mur- dered by a parcel-bomb in Mozambique (though there is some dispute as to the author of this deed). When I met him, Mr Slovo did not look like a man who had just undergone a course of chemotherapy for cancer. Casual- ly dressed (in his characteristic red socks), he looked younger than his 66 most event- ful years. He was polite, mild-mannered and affable, even avuncular; and I should guess that he takes delight in appearing the very opposite of the demon he is frequently painted as. He is soft-spoken, with a mild South African accent (his family emigrated to South Africa from Lithuania when he was eight years old, his more distant rela- tives being killed there during the Holo- caust); and he speaks calmly, even In response to questions which are clearly hostile, as though he had reached a state of serenity. Of late, he has been making some uncharacteristically conciliatory public statements; the author of the pamphlet, No Middle Road, which for many years was the guide of every serious South African revo- lutionary, was now saying that compromise

with the government was desirable and necessary, that the concerns and fears of the whites, including the police and the army, would have to be understood and within limits accommodated, and that a certain (unspecified) period of power-shar- ing was inevitable. I asked him whether his proposed compromise was strategic or tac- tical.

`It isn't a question of strategy or tactics,' he replied, 'but a recognition on the part of the government that it cannot go on governing in the same old way, and on the part of the ANC that we are not strong enough to seize power. I have been in favour of a multi-party system for many years now.'

I was surprised to hear it. I asked whether his experience of exile in African countries, such as Angola and Mozam- bique, had affected his views.

was never impressed by the so-called socialism of Angola and Mozambique,' he said. 'Subjectively, I never thought it worked.'

By subjectively, he meant (I think) that he did not give public expression to his doubts.

The fundamental question,' Slovo con- tinued, 'is who has power, and in whose interest.' Or, as Lenin succinctly put it, Who Whom?

I asked whether his experiences in African countries (including Zambia and Tanzania) had led him to reject nationali- sation as a policy.

`Yes,' he replied. 'Although everyone is agreed that this does not exclude deep Involvement of the state in the economy, which is necessary. But things obviously cannot change overnight,' he said. 'Change will have to be gradual.'

Had the people in the townships been told this? Was it not rather different from what slogans had led them to believe? Had not their expectations been raised to unre- alistic levels?

Mr Slovo replied that the slogans had been necessary to activate the masses; and slogans inevitably simplified matters. How- ever, he believed that, when the true situa- tion was explained to the people, they would understand; he had confidence in the political maturity of the South African masses.

Was I to understand, then, that he was now a reformist?

`As against what?' he asked.

A revolutionary.' He explained that without the revolu- tionary activity of the past few years there would have been no negotiations now. The same, of course, might be said for the South African security forces.

I asked him about his allegiance to the Soviet Union. I recalled reading an inter- view in the Independent, circa 1988, in which he had said he first realised that Stalin betrayed the working class, and that the Gulag was no mere figment of capital- 1st Propaganda, the previous year, when

revelations were made in the Soviet press.

`My disenchantment was a long process,' he said, 'beginning with Khrushchev's secret speech in 1956. It wasn't like a sud- den religious conversion, it was more a development.'

`If you don't mind me saying so, you were a late developer.' This seemed to provoke him into a defence of Soviet `achievements'.

`You must remember there was more to the Soviet Union than labour camps. It was the pioneer of free education, free health care, housing for the workers and security of employment. Children were looked after. There were the technological achievements, and for a time the growth rate exceeded that of the United States. And welfare capitalism was a response to the Soviet example.'

I overlooked the gross and self-serving historical inaccuracies in Mr Slovo's remarks, and he continued his self-excul- pation: `Of course, these things did not out- weigh the human side — the labour camps and so forth. But you have to remember as well that the Soviet Union occupied only 5 per cent of my consciousness. The other 95 per cent was occupied by South Africa. The Soviet Union was the only consistent friend we had, while the capitalist coun- tries ignored us completely. And there is not a single aspect of democratic life in this country that the Communist Party has not pioneered.'

Had he ever considered the Soviet Union a model for South Africa?

This established beyond reasonable doubt that to hate apartheid was not nec- essarily to love freedom (and no one doubts that Mr Slovo's hatred of apartheid was sincere).

Did you ever go to the Soviet Union?' I asked.

Did you not notice anything about it, the shoddiness and the shortages, for example?'

`Yes, we did, but at that time we explained them away to ourselves as the result of the arms race with the Ameri- cans.'

`And did you investigate other aspects of Soviet reality? Did you visit health-care facilities, for example, or look into hous- ing?'

`You must remember that we were there as guests of the government, and we met

only the nomenklatura. They supported us and we believed what they told us, we trusted them.'

Slovo seems unaware even now of the insouciance and irresponsibility of recom- mending so huge an experiment as com- munism in South Africa on the basis of such profound ignorance — if he was real- ly as ignorant as he said he was.

`We found the idea of an equality of suf- ficiency attractive,' he said. 'And look at the former East Germany. There was a survey published recently which showed that 60 per cent of people thought they were better off under Honecker than under capitalism.'

`And in ten years' time isn't it likely that black South Africans will say they were better off under de Klerk?' I asked.

`Well, I have travelled extensively in Africa and many blacks have told me that things were better under colonialism. Would you take that as an argument in favour of colonialism?'

I asked him about the violence in the townships. I said I had heard many stories of intimidation there. Had not mass action (strikes, school and commercial boycotts, demonstrations etc.) unleashed something which might prove difficult to control? Would the genie go meekly back into the bottle?

He replied that there had not been a sin- gle popular movement in the history of the world whose success was not ascribed by opponents to intimidation and conspiracy. He did not doubt there had been some intimidation in the townships, but it could scarcely account for the attendance of 50 or 100,000 people at mass rallies.

I mentioned the strike of auxiliary work- ers at Baragwanath Hospital in Soweto, during which the houses of some nurses (and the neighbours of nurses) had been burned down in an attempt to intimidate them into joining the strike. People had died.

`These things happen in all strikes. Look at your miners' strike.'

I asked what faith could be put in his political judgment. He had, after all, mis- taken tyranny for freedom and scarcity for plenty during nearly half a century. He had systematically disregarded or denied evi- dence of famine, mass murder, forced labour, repression, terror and brutality.

On the way back from ANC headquar- ters to the northern suburbs, I told the black taxi-driver that I had just interviewed Joe Slovo. He opened his eyes wide. `I love Joe Slovo,' he said. 'He was the first white man who really hated apartheid.'

`Do you see any dangers in him?' I asked.