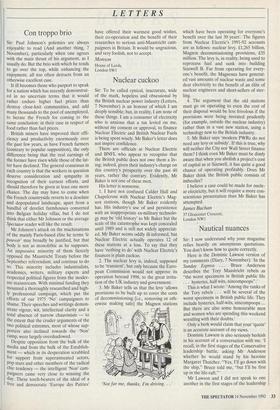 Sir: To be called cynical, inaccurate, wide of the mark, hopeless and obsessional by the British nuclear power industry (Letters, 7 November) is an honour of which I am deeply sensible; but, in reality, I am none of these things. I am a consumer of electricity who is anxious that a tax levied on me, without my consent or approval, to finance Nuclear Electric and British Nuclear Fuels is being spent wisely. Mr Baker's letter does not inspire confidence.

There are officials at Nuclear Electric and BNFL who appear to recognise that the British public does not owe them a liv- ing; indeed, given their industry's charge on this country's prosperity over the past 40 years, rather the contrary. Evidently, Mr Baker is not one of these men.

His letter is nonsense.

1. I have not confused Calder Hall and Chapelcross with Nuclear Electric's Mag- nox stations, though Mr Baker evidently has. His industry's use of and persistence with an inappropriate ex-military technolo- gy may be 'old history' to Mr Baker but the scale of the catastrophe was kept concealed until 1989 and is still not widely appreciat- ed. Mr Baker seems oddly ill-informed, but Nuclear Electric actually operates 12 of these stations at a loss. To say that they have 'nothing to do' with Nuclear Electric's finances is plain cuckoo.

2. The nuclear levy is, indeed, supposed to be 'transient', but only because the Euro- pean Commission would not approve its operation beyond 1998, to the great irrita- tion of the UK industry and government.

3. Mr Baker tells us that the levy `allows provisions to be built up to cover the costs of decommissioning [i.e., removing or oth- erwise making safe] the Magnox stations 'Not for me, thanks, I'm driving...' which have been operating for everyone's benefit over the last 30 years'. The figures from Nuclear Electric's 1991-92 accounts are as follows: nuclear levy, £1,265 billion, Magnox decommissioning provisions, £35 million. The levy is, in reality, being used to reprocess fuel and sunk into building Sizewell B. Far from operating for every- one's benefit, the Magnoxes have generat- ed vast amounts of nuclear waste and some dear electricity to the benefit of an elite of nuclear engineers and short-sellers of ster- ling.

4. The argument that the old stations must go on operating to even the cost of their disposal would be less frivolous if the provisions were being invested prudently (for example, outside the nuclear industry) rather than in a vast new station, using a technology new to the British industry.

5. Mr Baker says `modern PWRs do not need any levy or subsidy'. If this is true, why will neither the City nor Wall Street finance them? I think even Mr Baker must be dimly aware that when you abolish a project's cost of capital as at Sizewell, it has quite a good chance of operating profitably. Does Mr Baker think the British public consists of imbeciles?

I believe a case could be made for nucle- ar electricity, but it will require a more con- scientious presentation than Mr Baker has attempted.