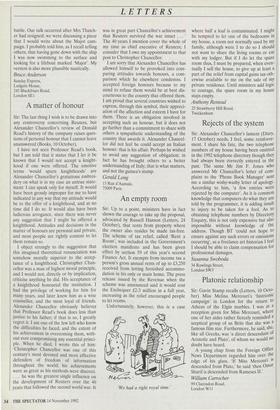 Sir: Up to a point, ministers have in fact shown the courage to take up the proposal, advocated by Russell Hanson (Letters, 24 October), that rents from property where the owner also resides be made tax-free. The scheme of tax relief, called 'Rent a Room', was included in the Government's election manifesto and has been given effect by section 59 of this year's second Finance Act. It exempts from income tax a person's gross annual rents of up to £3,250 received from letting furnished accommo- dation in his only or main home. The press release issued by the Revenue when the scheme was announced said it would cost the Exchequer £2-3 million in a full year, increasing as the relief encouraged people to let rooms.

Unfortunately, however, this is a case

We had a right royal time.'

where half a loaf is contaminated. I might be tempted to let one of the bedrooms in my house, a room not normally used by my family, although were I to do so I should not want to share the living rooms or eat with my lodger. But if I do let the spare room thus, I must be prepared, when even- tually I sell the house, to give up at least a part of the relief from capital gains tax oth- erwise available to me on the sale of my private residence. Until ministers add logic to courage, the spare room in my house stays empty.