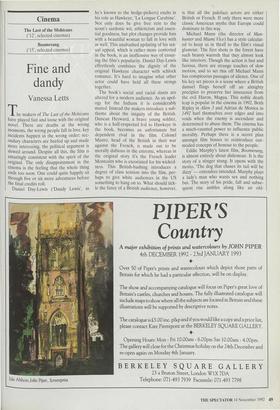 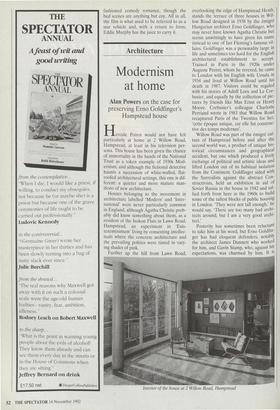 The makers of The Last of the Mohicans have played fast and loose with the original novel. There are deaths at the wrong moments, the wrong people fall in love, key incidents happen in the wrong order; sec- ondary characters are beefed up and made more interesting, the political argument is slewed around. Despite all this, the film is amazingly consistent with the spirit of the original. The only disappointment in the cinema is the feeling that the whole thing ends too soon. One could quite happily sit through five or six more adventures before the final credits roll.

he's known to the hedge-pickers) exults in his role as Hawkeye, 'La Longue Carabine'. Not only does he give free rein to the scout's sardonic wit, athleticism and essen- tial goodness, but plot changes provide him with a beautiful woman to fall in love with as well. This unabashed updating of his sex- ual appeal, which is rather more contorted in the book, is an inoffensive way of ensur- ing the film's popularity. Daniel Day-Lewis effortlessly combines the dignity of the original Hawkeye character with schlock romance. It's hard to imagine what other actor could have held all these strings together.

The book's social and racial slants are altered for a modern audience. As an apol- ogy for the Indians it is considerably muted. Instead the makers introduce a sub- theme about the iniquity of the British. Duncan Heyward, a brave young soldier, who is a half-respected foil to Hawkeye in the book, becomes an unfortunate but dependent rival in the film. Colonel Munro, head of the British in their war against the French, is made out to be morally dubious in the extreme, whereas in the original story it's the French leader Montcalm who is excoriated for his wicked- ness. This British-bashing introduces a degree of class tension into the film, per- haps to give white audiences in the US something to hang on to. What should tick- le the fancy of a British audience, however, is that all the paleface actors are either British or French. If only there were more classic American myths that Europe could dominate in this way.

Michael Mann (the director of Man- hunter and Miami Vice) has a style calculat- ed to keep us in thrall to the film's visual glamour. The first shots in the forest have such beamy warmth that they almost look like interiors. Though the action is fast and furious, there are strange touches of slow motion, and to set this off Michael Mann has conspicuous passages of silence. One of his key set pieces is a scene where a British damsel flings herself off an almighty precipice to preserve her innocence from the evil Huron, Magua. This noble death leap is popular in the cinema in 1992. Both Ripley in Alien 3 and Adrian de Moxica in 1492 hurl themselves over edges and into voids when the enemy is ascendant and determined to abuse them. The cinema has a much-vaunted power to influence public morality. Perhaps there is a secret plan amongst film bosses to reintroduce out- moded concepts of honour to the people.

Eddie Murphy's latest film, Boomerang, is almost entirely about dishonour. It is the story of a stinger stung. It opens with the motto, 'The dog that chases its tail will be dizzy' — entendres intended. Murphy plays a lady's man who wants sex and nothing but. The story of his pride, fall and subse- quent rise ambles along like an old- fashioned comedy romance, though the bed scenes are anything but coy. All in all, the film is what used to be referred to as a star vehicle and, with a return to form, Eddie Murphy has the juice to carry it.