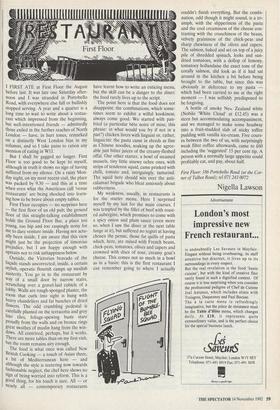 I FIRST ATE at First Floor the August before last.

It was late one Saturday after- noon and I was stranded in Portobello Road, with everywhere else full or bullishly stopped serving. A year and a quarter is a long time to wait to write about a restau- rant which impressed from the beginning, but well-intentioned friends — admittedly those exiled in the further reaches of North London — have, in hurt tones, remarked on a distinctly West London bias in my columns, and so I take pains to ration any mention of eating in W11.

But I shall be gagged no longer. First Floor is too good to be kept to myself, although in truth it shows no sign of having suffered from my silence. On a rainy Mon- day night, on my most recent visit, the place was packed by 9.30 — and this at a time when even what the Americans call 'venue restaurants' are being shocked into learn- ing how to be brave about empty tables.

First Floor occupies — no surprises here — the first floor of an old pub; the ground floor of this straight-talking establishment holds the Ground Floor Bar, a place too young, too hip and too raspingly noisy for me to dare venture inside. Having not actu- ally been inside, I am aware that this view might just be the projection of timorous prejudice, but I am happy enough with upstairs not to risk unhappiness below.

Outside, the Victorian bravado of the façade stands uncorrected; inside, a certain stylish, operatic flourish camps up modish austerity. You go in to the restaurant by way of a small door by narrow stairs, scrunching over a gravel-laid cubicle of a lobby. Walls are rough-sponged plaster, the room that curls into sight is hung with heavy chandeliers and fat bunches of dried flowers. The odd crumbling pedestal is carefully planted on the terracotta and grey lino tiles, foliage-spewing busts stare proudly from the walls and on bronze rings great swathes of muslin hang from the win- dows. All contrived, perhaps, but it works. There are more tables than on my first visit, but the room remains airy enough. The food is what once was called New British Cooking — a touch of Asian there, a bit of Mediterranean here — and although the style is teetering now towards fashionable neglect, the chef here shows no sign of being worried into reform. This is a good thing, for his touch is sure. All — or nearly all — contemporary restaurants have learnt how to write an enticing menu, but the skill can be a danger to the diner; the food rarely lives up to the script.

The point here is that the food does not disappoint; the combinations, which some- times seem to exhibit a wilful kookiness, always come good. We started with pan- fried (a particular bete noire of mine, this phrase: in what would you fry if not in a pan?) chicken livers with linguini or, rather, linguicini: the pasta came in shreds as fine as Chinese noodles, soaking up the agree- able just bitter juices of the creamy-fleshed offal. Our other starter, a bowl of steamed mussels, tiny little sinewy ochre ones, with strips of tenderest squid, came prinked with chilli, tomato and, intriguingly, tamarind. The squid here should win over the anti- calamari brigade who bleat anxiously about rubberiness.

My weakness, usually, in restaurants is for the starter menu. Here I surprised myself by my lust for the main courses. I was tempted by the fillet of beef with roast- ed aubergine, which promises to come with a spicy onion and plum sauce (even more so, when I saw the diner at the next table lunge at it), but suffered no regret at having chosen the penne, those fat quills of pasta which, here, are mixed with French beans, chick-peas, tomatoes, olives and capers and crowned with discs of sour, creamy goat's cheese. This comes not so much in a bowl as in a basin: this is the first restaurant I can remember going to where I actually couldn't finish everything. But the combi- nation, odd though it might sound, is a tri- umph, with the slipperiness of the pasta and the cool creaminess of the cheese con- trasting with the crunchiness of the beans, velvety graininess of the chick-peas and sharp chewiness of the olives and capers. The salmon, baked and set on top of a juicy pile of shredded spinach, leeks and sun- dried tomatoes, with a dollop of lemony, tomatoey hollandaise the exact tone of the corally salmon, did look as if it had sat around in the kitchen a bit before being brought to the table, but since this was obviously in deference to my pasta which had been carried to me at the right moment — I was selfish13 predisposed to be forgiving.

A bottle of smoky New Zealand white (Nobilo 'White Cloud' at £12.45) was a stern but accommodating accompaniment, and we managed to make some headway into a fruit-studded slab of sticky toffee pudding with vanilla ice-cream. Five cours- es between the two of us, with surprisingly weak filter coffee afterwards, came to £60 including the 'suggested' 15 per cent tip. A person with a normally large appetite could profitably eat, and pay, about half.