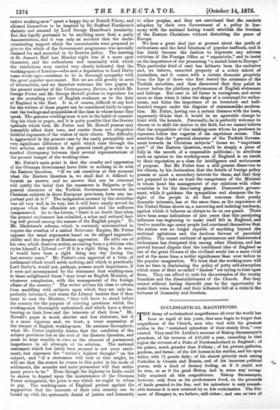 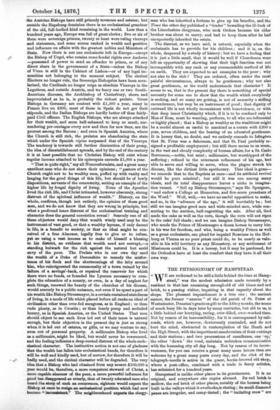 THE decay of ecclesiastical magnificence all over the world has been so rapid of late years, that men begin to forget that magnificoes of the Church, men who vied with the greatest nobles in the "sustained splendour of their stately lives," ever existed. They read Dr. Liddon's account of Bishop Strossmayer's grandeur, of his revenue of £50,000 a year, exceeding in that region the revenue of a Duke of Northumberland in England ; of his palace, much grander than Fulham; of his picture-galleries, gardens, and farms ; of the 100 horses in his stables, and his open tables, with 75 guests daily; of his almost princely rank among Catholics in Croatia and Bosnia, and of his immense political power, with a kind of dreamy feeling, as if it could not be true, or as if the good Bishop had in some way wrong- fully acquired all this magnificence. Bishop Strossmayer, however, only lives as his predecessors lived, on the proceeds of lands granted to his See, and his splendour is only remark- able because it is now retained by so few ecclesiastics. The Pri- mate of Hungary is, we believe, still richer ; and one or two of the Austrian Bishops have still princely revenues and estates; but outside the Hapsburg dominion there is no ecclesiastical grandeur of the old, full-bodied kind remaining in the world. Less than a hundred years ago, Europe was full of great clerics ; five or six of them were sovereign princes, twenty at least were ruling viceroys and statesmen, and some scores ranked in wealth and position and influence on affairs with the greatest nobles and Ministers of State. Now there is not one ecclesiastic left in Europe—except the Bishop of Urgel, who retains some feudal rights over Andorra —possessed of power to send an offender to prison, or of any direct share in the government of a State—unless the Bishop of Vizen is still in the Cabinet of Lisbon—or of any legal im- munities not belonging to the meanest subject. The clerical Electors no longer rule, the Sovereign Bishoprics have been secu- larised, the Cardinals no longer reign as absolute Viceroys in the Legations, and outside Austria, and we fancy one or two South- American dioceses, the Archbishop of Canterbury, shorn and impoverished as he is, is probably the richest prelate. Great Bishops in Germany are content with /1,200 a year, many in France live on £600, most of those in Spain do not get their stipends, and the Italian Bishops are hardly better off than fairly- paid Civil officers. The English Bishops, who are always attacked for their wealth, and seem half-ashamed to keep so much, sur- rendering per-centages every now and then for new Sees, are the poorest among the Barons ; and even in Spanish America, where the Church is still rich, the prelates are abandoning the state which under the Spanish regime surpassed that of the Viceroys. The tendency is towards still further diminution of their pomp, the idea of disestablishment spreads, and by the end of the century it is at least possible that no Christian Bishop will exist whose regular income attached to his episcopate exceeds £1,000 a year.

"That is quite right," say all Nonconformists, and a great many excellent men who do not share their opinions ; "pastors of the Church ought not to be wealthy men, puffed up with vanity and longing for the good things of this life, but should be of lowly dispositions, servants of the community, setting an example of the higher life by frugal dignity of living. None of the Apostles lived the rich life, and Christ intimated, however obscurely, strong distrust of the spiritual influence of wealth." History, on the whole, confirms, though not entirely, the opinion of these good men, and we do not know that they are wrong in principle, but what a profound inner distrust of the ecclesiastical training and character does the general conviction reveal ! Scarcely one of all these objectors would deny that wealth wisely used may be the instrument of vast good, or that a wealthy layman, if only decent in life, is a benefit to society, or that an ideal might be con- ceived of a free Almoner, legally free to give or to refuse, yet so using a vast income as to make of himself a blessing to his district, an evidence that wealth need not corrupt,—a standing bulwark for the rich against the natural but acrid envy of the poor. The Prelate who in our own day used the wealth of a Duke of Devonshire to remedy the misfor- tunes of his flock and the shortcomings of the laity around him, who reinvigorated the commonalty of a town ruined by the failure of a savings'-bank, or repaired the reservoir for which there were no funds, or founded the Lyceum necessary to com- plete the education of a county, or even, in a day of neglect for such things, renewed the beauty of the churches of his diocese, would scarcely be a public nuisance, not even if he spent apart of his wealth like Bishop Strossmayer, in a certain sustained stateliness of living, in a mode of life which placed before all ranks an ideal of civilisation other than over-fed smugness, as in England ; or than rude plenty, as in Croatia ; or than lonely pomp and secluded luxury, as in Spanish America, or the United States. That men should object to see such lives led out of their taxes is natural enough, but their objection in the present day is just as strong when it is led out of estates, or gifts, or we may venture to say, even out of personal property. A millionaire Bishop who lived as a millionaire, might be liked, but would never be reverenced, and the feeling indicates a deep-rooted distrust of the whole eccle- siastical character. The instinctive notion is not one of gladness that the wealth has fallen into ecclesiastical hands, for therefore it will be well and kindly used, but of sorrow, for therefore it will be badly used, and the clerical character will be degraded. The very idea that a Bishop who had obtained from any source £100,000 a year would be, therefore, a more competent steward of Christ, a more capable almoner of the poor, a more powerful influence for good has disappeared so utterly, that of twenty educated men who heard the story of such an occurrence, eighteen would expect the Bishop at once to resign an ecclesiastical position which had now become "inconsistent." The neighbourhood expects the clergy- man who has inherited a fortune to give up his benefice, and the Times the other day published a "leader" bewailing the ill-luck of the Lincolnshire clergyman, who took Orders because his elder brother was about to marry, and had to keep them after he had unexpectedly inherited the estate.

The distrust, as we have said, is natural, especially when the ecclesiastic has to provide for his children ; and it is, on the whole, deepened by a study of history ; but we have a feeling that it is just a little small, that it would be well if Churchmen were left an opportunity of showing that their high function was not incompatible with any rank or any commendable method of life on earth. They are expected to set examples to the poor ; why not also to the rich ? They are ordered, often under the most painful circumstances, always to be gentlemen ; why not also great gentlemen, as the world understands that character ? It seems to us, that in the present day there is something of special necessity for some one to show that the wealth which everybody is seeking, and so many are getting, is not of necessity a stifling encumbrance, but may be an instrument of good ; that dignity of outward life is not wholly inconsistent with benevolence, or with that deep inner Christianity which, if it is to be confined only to Men of Ross, must be wanting, perforce, to all who are influential or highly placed ; that a Bishop as wealthy as the wealthiest might be a model almost as useful to mankind as a curate with £200 a year, seven children, and the bearing of an educated gentleman. It is heresy that, no doubt, and we entirely concede to Islington that St. Peter was a fisherman, and that St. Paul probably re- signed a profitable employment ; but still there seems to us room, in the vast and cloudy complexity of human affairs, for a St. Carlo Borromeo,—noble, but saint ; millionaire, but worshipped of the suffering ; refined to the uttermost refinement of his age, but able to serve and willing to serve, when the plague struck his diocese, like the dirtiest little apothecary. That ideal is gone— we concede that to the Baptists at once—and its artificial revival would be pure mischief ; but still it was one among many ideals, and its total disappearance leaves a niche in imagina- tion vacant. "Sell up Bishop Strossmayer," says Mr. Spurgeon, "and endow a College at Homerton, and five-score preachers of the Word." Well, well,—we have no useful opposition to make, and so, in the "advance of the age," it will inevitably be ; but still we can imagine good men and wide-minded men, while con- senting to the auction, half-regretting the sale. After all, God made the oaks as well as the corn, though the corn will not ripen in the oaks' full shade ; and we can imagine Bishop StrosEsmayer, who sends the Prince of Montenegro a dozen horses to carry him in his war for freedom, and who, being a wealthy Prince as well as a great ecclesiastic, can plead for impaled Bosnians in the Hof- burg at Vienna as no poor priest could do, to be nearly as valu- able in his wild territory as any Monastery, or any settlement of Missioners could be. It is a heresy, but it may be pardoned, for the Orthodox have at least the comfort that they have it all their own way.