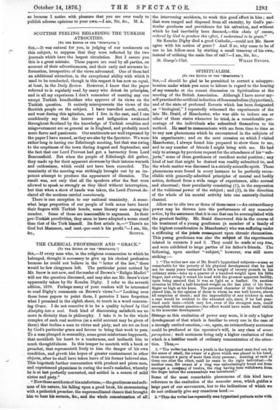 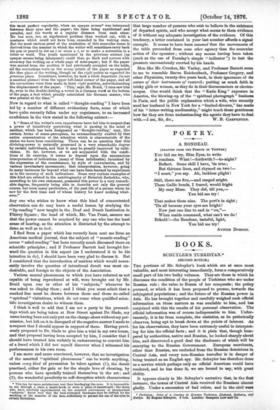 SIR,—I should be glad to be permitted to correct a misappre- hension under which you seem to labour in regard to the bearing of my remarks at the recent discussion on Spiritualism at the meeting of the British Association. Although I have never my- self practised the artificial induction of Somnambulism (hypnotism), and of the state of profound Reverie which has been designated as "biological," I repeatedly witnessed the experiments of the late Mr. Braid, of Manchester, who was able to induce one or

other of these states whenever he tried, in a considerable per- centage of the individuals who submitted themselves to his

method. He used to communicate with me from time to time a& to any new phenomena which he encountered in the subjects of his experiments ; and on the next occasion on which I visited Manchester, I always found him prepared to show them to me, and to any number of friends I might bring with me. He had only to arrange by previous request for the attendance of his "sub- jects," some of them gentlemen of excellent social position ; any kind of test that might be desired was readily submitted to, and the whole matter was discussed in a strictly scientific spirit. These phenomena were found in every instance to be perfectly recon- cilable with generally-admitted principles of mental and bodily action, deduced from a wide range of experiences, alike normal and abnormal ; their peculiarity consisting (1), in the suspension of the volitional power of the subject ; and (2), in the direction of the whole of his mental activity into one narrowly-limited channel.

Allow me to cite two or three of these cases :—An extraordinary power may be thrown into the performance of any muscular action, by the assurance that it is one that can be accomplished with

the greatest facility. Mr. Braid discovered this in the course of his treatment of a young gentleman (a member of a family of the highest consideration in Manchester) who was suffering under

a stiffening of the joints consequent upon chronic rheumatism_ This young gentleman was also the subject of the experiments related in extracts 2 and 3. They could be made at any time, and were exhibited to large parties of his father's friends. The

following, upon another "subject," however, was still more striking :—

1. "The writer saw one of Mr. Braid's hypnotised subjects—amen so remarkable for the poverty of his physical development that he had not for many years ventured to lift a weight of twenty pounds in his ordinary state—take up a quarter of a hundred-weight upon his little finger, and swing it round his head with the greatest apparent facility, upon being assured that it was as light as a feather. On another occasion he lifted a half-hundred-weight on the last joint of his fore.. finger as high as his knee. The personal character of this individual placed him, in the opinion of those to whom he was well known, above- all suspicion of deceit ; and the impossibility of any trickery in such a case would be evident to the educated eye, since, if he had prac- tised such feats—which very few, even of the strongest moo, ould' accomplish without practice—the effect would have made itself in his muscular development."

Strange as this exaltation of power may seem, it is only a higher- development of that which is familiar to every one in the case of a strongly excited emotion,—so, again, an extraordinary acuteness could be produced at the operator's will, in any class of sense- perceptions ; such acuteness being only a higher exaltation of that which is a familiar result of ordinary concentration of the atten- tion. Thus,- 2. "The writer has known a youth in the hypnotised state find out, by the sense of smell, the owner of a glove which was placed in his band, from amongst a party of more than sixty persons; scenting at each of_ them one after the other, until he came to the right individual.—In another case, the owner of a ring was unhesitatingly found out from amongst a company of twelve, the ring having been withdrawn from the finger before the somnambule was introduced."

Some of the most remarkable phenomena of this kind have reference to the exaltation of the muscular sense, which guides a large part of our movements, but to the indications of which we do not ordinarily give any conscious heed :—

3. "Thus the writer has repeatedly seen hypnotised patients write with

the 1Rost perfect regularity, when an opaque screen* was interposed between their eyes and the paper; the lines being equidistant and parallel, and the words at a regular distance from each other. Ile has seen, too, an algebraical problem thus worked out, with a neatness which could not have been exceeded in the waking state. But the most curious proof of the exaltation of this muscular sense is derived from the manner in which the writer will sometimes carry back his pen or pencil to dot an i or cross a t, or to make a correction in a letter or word. The youth mentioned in the previous extract (an opaque screen being interposed) could thus go back and correct with accuracy the writing on a whole page of note-paper ; but if the paper was moved from the position it had previously occupied on the table, all the corrections were on the wrong points of the paper as regarded the then place of the writing, though on the right points as regardod its previous place. Sometimes, however, he took a fresh departure (to use a nautical phrase) from the upper left-hand corner of the paper, and all his corrections were then made in their right position, notwithstanding the displacement of the paper. 'This,' says Mr. Braid, 'I once saw him do, even to the double-dotting a vowel in a German word at the bottom of the page, a feat which greatly astonished his German master, who was present at the time."

Now in regard to what is called "thought-reading" I have been led by a number of different evidentiary facts, some of which !save quite recently fallen under my cognisance, to an increased confidence in the view stated in the following extract:-

4." Some of the writer's own experiences have led him to 'inspect that a power of intuitively perceiving what is passing in the mind of another, which has been designated as 'thought-reading,' may, like certain forms of sense-perception, be extraordinarily exalted by that entire concentration of the attention which is characteristic of the states we have been considering. There can be no question that this divining-power is naturally possessed in a very remarkable degree by certain individuals, and that it may be greatly improved by culti- vation. So far, however, as we are acquainted with the condi- tions of its exercise, it seems to depend upon the unconscious interpretation of indications (many of them indefinable) furnished by the expression of the countenance, by style of conversation, and by various involuntary movements; that interpretation, however, going in many instances far beyond what can have been learned by experience as to the meaning of such indications. Some very curious examples of this kind are related in the autobiography of Heinrich Zschokke, who, according to his own statement, possessed this power in a very remark- able degree, frequently being able to describe not only the general

• course, but oven many particulars, of the past life of a person whom he saw for the first time and of whose history he knew nothing what- ever."

Any one 'who wishes to know what this kind of concentrated observation can do may learn a useful lesson by studying the " lip-reading " now taught in the Deaf and Dumb Institution in Fitzroy Square ; the head of which, Mr. Van Pra.at, assures me that the power cannot be acquired by any one who has the least sense of hearing, as the attention is distracted by the attempt to listen as well as to look.

I find from a paper which has recently been sent me from an American medical journal, that the subject of "muscle-reading" versus "mind-reading" has been recently much discussed there on scientific principles ; and if Professor Barrett had brought for- ward the question in this aspect (as I understood it to be his intention to do), I should have been very glad to discuss it. But I considered that the introduction of matters which would neces- sarily involve the question of intentional deceit was most un- desirable, and foreign to the objects of the Association.

Various mental phenomena to which you have referred as not capable of being reproduced at will, were brought out by Mr. Braid upon one or other of his "subjects," whenever he was asked to display them ; and I think you must admit that a marked line must be drawn between these and those so-called "spiritual" visitations, which do not come when qualified scien- tific investigators desire to witness them.

I think it well to add that I am not a party to the proceed- ings which are being taken at Bow Street against Dr. Slade, my name having been not only put on the charge-sheet without my per- mission, but left on it in disregard of the negative answer I made to a request that I should appear in support of them. Having previ- ously proposed to Dr. Slade to give him a trial in my own house, and that proposal having been accepted by him, I consider that I should have treated him unfairly in endeavouring to convict him of a fraud which I did not myself discover when I witnessed his performances in his own room.

I am more and more convinced, however, that no investigation of the asserted "spiritual phenomena" can be worth anything, unless every kind of precaution be taken against (1), the deceit practised, either for gain or for the simple love of cheating, by persons who have specially trained themselves in the art ; and (2), the wonderful proclivity to self-deception which characterises * This is a far more satisfactory test than bandaging the eyes. It is impossible to see through a slate, a musie-book, or even a piece of pasteboard ; but those who have carefully experimented on the asserted clairvoyance of mesmerised .subjects," know well that the best-arranged bandages may be shifted, by the working of the muscles of the face, sullicdently to permit the use of the eyes in certain directions. that large number of persons who wish to believe in the existence of departed spirits, and who accept what seems to them evidence of it without any adequate investigation of the evidence. Of this tendency, a letter contained in your last number affords a signal example. It seems to have been assumed that the movements of the table proceeded from some other agency than the muscular action of the operator ; without any means having been taken (such as the use of Faraday's simple "indicator ") to test the pressure unconsciously exerted by his hands.

Men like Mr. Crookes, Mr. Varley, and Professor Barrett seem to me to resemble Baron Reichenbach, Professor Gregory, and other Physicists, twenty-five years back, in their ignorance of the nature of their instruments of research; putting as much faith in tricky girls or women, as they do in their thermometers or electro- scopes. One would think that the "Katie King" exposure in America, the blowing-up of the "spiritual photograph" business in Paris, and the public explanation which a wile, who recently sued her husband in New York for a "limited divorce," has made of his "letter-writing mediumship," might teach these gentlemen how far they are from understanding the agents they have to deal