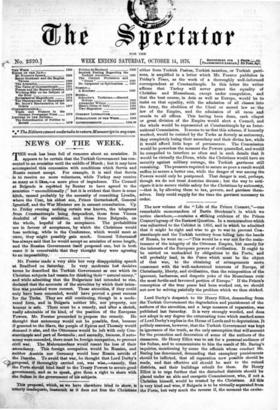 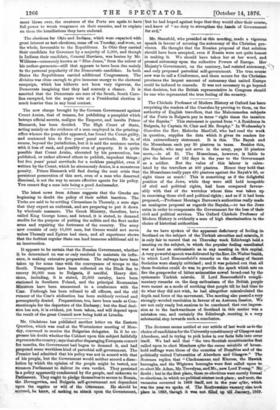 Lord Derby's despatch to Sir Henry Elliot, demanding from the

Turkish Government the degradation and punishment of the authors of the atrocities, and a large measure of reparation, was published last Saturday. It is very strongly worded, and does not adopt in any degree the extenuating tone which marked some of Lord Derby's replies in the House of Lords and to deputations. It politely assumes, however, that the Turkish Government was kept in ignorance of the truth, as the only assumption that will account for the promotion and decoration of some of the authors of the massacres. Sir Henry Elliot was to ask for a personal audience of the Sultan, and to communicate to him the result of Mr. Baring's inquiries, mentioning by name the officials whose conduct Mr. Baring has denounced, demanding that exemplary punishments should be inflicted, that all reparation now possible should be made, and that effective aid should be sent to the ruined districts, and their buildings rebuilt for them. Sir Henry Elliot is to urge further that the disturbed districts should be placed under an able and energetic Commissioner, who, if not a Christian himself, would be trusted by the Christians. All this is very kind and wise, if Bulgaria is to be virtually separated from the Porte, but very much the reverse if, the moment the excite-

ment blows over, the creatures of the Porte are again to have full power to wreak vengeance on their enemies, and to expiate on them the humiliations they have endured.