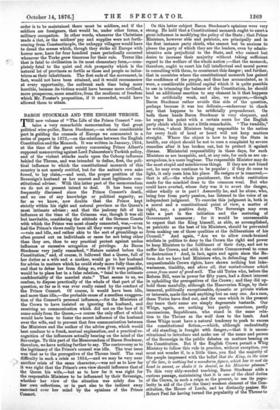 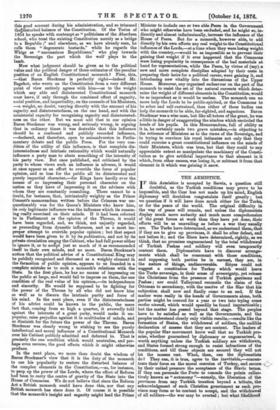 BARON STOCKMAR AND THE ENGLISH THRONE. T HE new volume of

this good account during his administration, and so trimmed theldisturbed balance of the Constitution. Of the Tories of 1854 he speaks with contempt as "politicians of the Aberdeen school, who treat the existing Constitution merely as a bridge to a Republic ;" and elsewhere, as we have already seen, he calls them "degenerate bastards," while he regards the Whigs as "unconscious Republicans," who play towards the Sovereign the part which the wolf plays to the lamb.

Now what judgment should be given as to the political value and the political danger of these estimates of the peculiar position of an English Constitutional monarch ? First, this, —that Baron Stockmar is perfectly right—indeed Mr. Bagehot, who wrote on the Constitution from a very different point of view entirely agrees with him—as to the weight which any able and disinterested Constitutional monarch must have, if only through the combined effect of sagacity, social position, and impartiality, on the counsels of his Ministers, —a weight, no doubt, varying directly with the amount of his sagacity and disinterestedness, on the one hand, and with the ministerial capacity for recognising sagacity and disinterested- ness on the other. But we must add that in our opinion Baron Stockmar was wrong, and seriously wrong, in arguing that in ordinary times it was desirable that this influence should be a confessed and publicly recorded influence, —declared, and therefore, open to animadversion in Parlia- mentary debate and the public Press. For the very con- dition of the utility of this influence, is that complete dis- interestedness and intrinsic rationality which would naturally influence a party man to abate something of the intensity of his party view. But once published, and criticised by the party to whose views such an influence is adverse, it would at once appear as an effort to override the force of popular opinion, and so lose for the public all its disinterested and purely impartial character,—for Kings have hardly ever the means of so impressing their personal character on the nation as they have of impressing it on the advisers with whom they are constantly consulting. There cannot be a doubt, for instance, that, intrinsically weighty as the Prince Consort's memorandum written before the Crimean war un- questionably was for the Queen's Ministers who knew him, its only legitimate influence was the influence which its reason- ing really exercised on their minds. If it had been referred to in Parliament as the opinion of the Throne, it would have been regarded, and, we think, not unjustly regarded, as proceeding from dynastic influences, and as a most im- proper attempt to override popular opinion ; but that aspect would have been given to it by its publication, and not by its private circulation amgng the Cabinet, who had full power either to ignore it, or to accept just so much of it as recommended itself to their own minds, and no more. Baron Stockmar's notion that the political advice of a Constitutional King may be publicly recognised and discussed as a weighty element in the formation of public opinion, appears to UB founded in a complete mistake as to such a monarch's relations with the State. In the first place, he has no means of impressing on the public at large, and would fail to impress on them, the one condition of the real value of his opinion,—its independence and sincerity. He would be supposed to be fighting for the power of the Throne by all who did not know him so well as to discern the intrinsic purity and force of his mind. In the next place, even if the disinterestedness of his advice could be known to the public, the mere fact that, coming from so high a quarter, it avowedly told against the interests of a great party, would make it un- popular, raise prejudice against it in multitudes of minds, and so diminish for the future the power of the Throne. Baron Stockmar was clearly wrong in wishing to see the purely intellectual and moral influence of a Constitutional Monarch over his Cabinet publicly admitted and deferred to. That is precisely the one condition which would neutralise, and per- haps even reverse, the good effects which it might otherwise produce.

In the next place, we more than doubt the wisdom of Baron Stockmar's view that it is the duty of the monarch to use his popularity to restore the disturbed balance of the complex elements in the Constitution,—as, for instance, to prop up the power of the Lords, where the effect of Reform had been to carry the centre of gravity of the State into the House of Commons. We do not believe that since the Reform Act .a British monarch could have done this, nor that any British monarch has since done it. Of course it is possible that the monarch's insight and sagacity might lead the Prime Minister to include one or two able Peers in the Government who might otherwise have been excluded, and he might so, in- directly and almost infinitesimally, increase the influence of the House of Peers. But for a monarch, however able, to add directly by his own efforts any real weight to the Constitutional influence of the Lords,—at a time when they were losing weight with the country,—would be as impossible as to prevent their gaining that weight if it ever happened that the Commons were losing popularity in consequence of the bad materials at hand for representatives, while the Peers, by virtue of (say) a new and more complete discipline adopted by their caste in preparing their heirs for a political career, were gaining it, and introducing new vitality into the discussions of the Upper House. Moreover, any organised endeavour on the part of the monarch to resist the set of the natural currents which deter- mine the weight of different elements in the Constitution, would be as imprudent as it would be useless. The monarch can no more help the Lords to be public-spirited, or the Commons to be sober and self-restrained, than either of these bodies can help the monarch to be able, far-sighted, and sagacious. Baron Stockmar was a wise man, but like all tutors of the great, he was a little in danger of exaggerating the nimbus which encircled the heads of his pupils. In this Memorandum, full of ability as it is, he certainly made two grave mistakes,—in objecting to the reticence of Ministers as to the views of the Sovereign, and in trying to convince his royal intimates not only that they could exercise a great constitutional influence on the minds of their Ministers, which was true, but that they could to any appreciable extent so manipulate the machinery of the Consti- tution as to give artificial importance to that element in it which, from other causes, was losing it, or subtract it from that element in it which was gaining it anew.