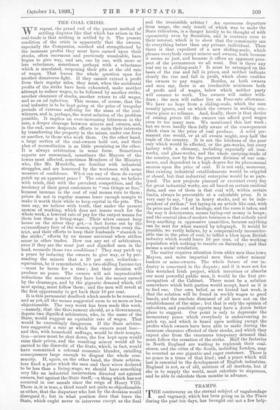 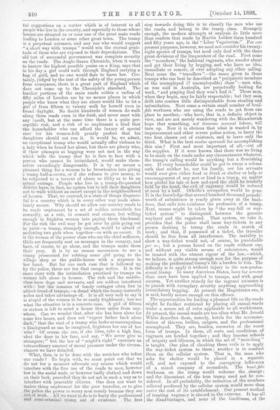 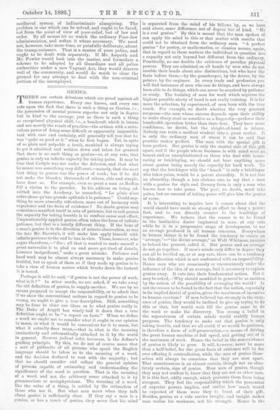 Page 25, 14 October 1893 — TRAMPS. T HE controversy on the eternal subject of vagabondage and
Close

TRAMPS. T HE controversy on the eternal subject of vagabondage and

vagrancy, which has been going on in the Times during the past ten days, has brought out not a few help- ful suggestions on a matter which is of interest to all people who live in the country, and especially to those whose houses are situated on or near one of the great main roads leading to London or some other great town. The tramp is a perpetual nuisance, and any one who would suggest " a short way with tramps " would win the eternal grati- tude of those who are exposed to their depredations. The old test of successful government was complete security on the roads. The Anglo-Saxon Chronicle, when it wants to bestow the highest possible praise on a King, says that in his day a girl could walk through England carrying a bag of gold, and no one would dare to harm her. Cer- tainly, judged by the test of the safety of the young person from annoyance, there is a great part of England which does not come up to the Chronicle's standard. The lonelier portions of the main roads within a radius of fifty miles of London are by no means places in which people who know what they are about would like to let a girl of from fifteen to twenty walk by herself even in broad daylight. No doubt hundreds of women do walk along these roads even in the dusk, and never meet with any insult, but at the same time there is a quite per- ceptible risk, and a risk of so unpleasant a kind that the householder who can afford the luxury of special care for his women-folk greatly prefers that his daughters should not run it. It would be, we admit, an exceptional tramp who would actually offer violence to a lady when he found her alone, but there are plenty who, if their attempts at begging were not met in the way which tells the tramp that he is face to face with a person who cannot be intimidated, would make them- selves exceedingly disagreeable. It is by no means a pleasant thing for a woman to be browbeaten into giving a tramp half-a-crown, or if she refuses to give money, to be subjected to a torrent of abuse so filthy as to be an actual outrage. People who live in a tram-frequented district have, in fact, no option but to tell their daughters not to walk without an escort except in the neighbourhood of houses. That, we contend, is a state of things disgrace- ful to a country which is in every other way made abso- lutely secure. Why should we allow our country roads to be made unpleasant by a set of sodden scoundrels too cowardly, as a rule, to commit real crimes, but willing enough to frighten women into paying them blackmail. For the rich the evil may be got over by girls going out in pairs—a tramp, strangely enough, would be afraid of molesting two girls when together—or with an escort. It is the women of the poorer class who are the chief sufferers. Girls are frequently sent on messages in the country, and have, of course, to go alone, and the tramps make them their prey, It is by no means uncommon to see • a tramp prosecuted for robbing some girl going to the village shop or the public-house with a sixpence in her hand. But for one such case that is followed up by the police, there are ten that escape notice. It is the same story with the intimidation practised by tramps on women left alone in houses. The rich and the middle- class have dogs and servants, and are seldom interfered with ; but the inmates of lonely cottages often live in abject dread of tram ps,—a dread Which the tramp instantly notes and takes advantage of. It is all very well to say it is stupid of the women to be so easily frightened ; but see what the situation is in a concrete case. A girl of fifteen or sixteen is left to mind a house three miles from any- where. Can we wonder that, after she has been alone for some five hours, and does not "expect father back afore dark," that the visit of a tramp who looks as unscrupulous a blackguard as can be imagined, frightens her out of her wits ? Of course she can, if she likes, take a high line, shut the door in his face, and say, " We never give to strangers ; " but the law of "might's right" exercises an extraordinary amount of moral pressure under the circum- stances we have detailed.