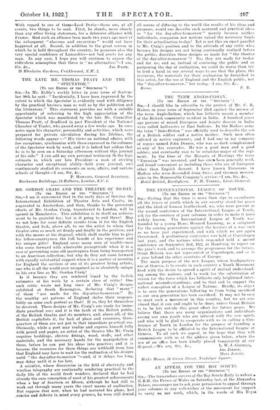 MR. GORDON CRAIG AND THE THEATRE OF TO-DAY. [To THE

EDITOR OF THE " SPECTATOR."] SIR,—I see it announced that in the early days of October the International Exhibition of Theatre Arts and Crafts, in- augurated in Amsterdam, and then, thanks to the persistent efforts of Mr. Gordon Craig, transferred to London, will be opened in Manchester. This exhibition is in itself an achieve- ment to be grateful for; but is it going to end there? May we not hope for some definite results from it for the English theatre, and look, above all, to see the artist to whom that theatre owes so much set firmly and finally in the position, and with the means at his disposal, whiCh shall enable him to give his fellow-countrymen the full benefit of his experience and his unique gifts? England owns many men of wealth—men who come forward with admirable promptitude when it is a case of preventing some old masterpiece from being transported to an American collection; but why do they not come forward with equally substantial support when it is a matter of securing for England the services of one of its greatest living artists, one who is all the world over recognized as so absolutely unique in his own line as Mr. Gordon Craig?

Is it because they are rendered timid by the foolish estimates of his work by a certain class of critic? One such critic wrote not long since of Mr. Craig's designs exhibited at South Kensington, declaring that " many " of them " are made for the day-after-to-morrow." Do the wealthy art patrons of England shelve their responsi- bility on some such pretext as that? If so, they let themselves be deceived. These designs of Mr. Craig's are ready for imme- diate practical use; and it is the fault of the British public, of the British theatre and its members, and, above all, of the British capitalists if, for lack of place and resources, three- quarters of them are not put to that immediate practical use. Obviously, while a poet may realize and express himself fully with pencil and paper, an artist of the theatre like Mr. Craig requires buildings, electric fittings, wood, stuffs, and other materials, and the necessary hands for the manipulation of these, before he can put his ideas into practice; and it is because the resources for these things are withheld from him that England may have to wait for the realization of his designs until " the day-after-to-morrow "—and, if it delays too long, may delay until it is too late.

A scientist, whose discoveries in the field of electricity and wireless telegraphy are continually rendering practical to the daily life of the world fresh wonders, declared that he had already the sure conception of most of his greatest achievements when a boy of fourteen or fifteen, although he had still to work out through many years the exact means of realization. But suppose that now, when he had matured his plans, had .concise and definite in.mind every process, he were still denied all means of diffusing to the world the results of his ideas And purposes, would one describe such matured and practical ideas as " for the day-after-to-morrow " merely because neither individuals, companies nor nations raised the necessary funds for their actualization to-day? Yet is not this an exact parallel to Mr. Craig's position and to the attitude of any critic who, because his designs are not being continually realized before the public, describes those designs as made for " the theatre of the day-after-to-morrow "? No; they are made for to-day and for us; and so, instead of confusing the public and so postponing the day of realization, we could do worse than try to lend a hand in our several ways to see that the place, the resources, the materials for their realization be furnished to this artist, for the use of England and the English public, not the "day-after-to-morrow," but to-day.--I am, Sir, &e..