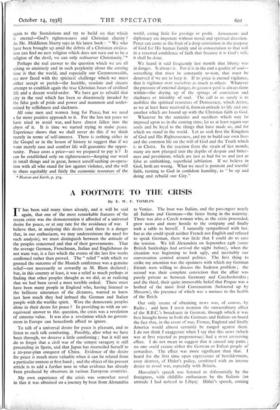 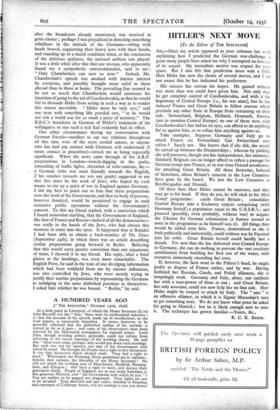 A FOOTNOTE TO THE CRISIS By E. W. F. TOMLIN

IT has been said many times already, and it will be said again, that one of the most remarkable features of the recent crisis was the demonstration it afforded of a universal desire for peace, or at any rate for the avoidance of war. 1 believe that, in analysing this desire (and there is a danger that, in our enthusiasm, we may underestimate the need for such analysis), we must distinguish between the attitude of the peoples concerned and that of their governments. That the average German, Frenchman, Italian and Englishman do not viant war, is a fact which the events of the last few weeks confirmed rather than proved. The " relief " with which we greeted the outcome of the Munich conference was a genuine relief—not necessarily so cowardly as M. Blum declared ; but, in this country at least, it was a relief as much perhaps at finding that other peoples thought as we did, as at realising that we had been saved a most terrible ordeal. There must have been many people in England who, having listened to the bellicose utterances of the dictators, wanted to know just how much they had imbued the German and Italian people with the warlike spirit. Were the democratic peoples alone in their desire for peace ? In providing us with an un- equivocal answer to this question, the crisis was a revelation of extreme value. It was also a revelation which no govern- ment in Europe can henceforth afford to ignore.

To talk of a universal desire for peace is pleasant, and to listen to such talk comforting. Possibly, after what we have been through, we deserve a little comforting ; but it will not do to forget that a civil war of the utmost savagery is still proceeding in Spain, and that Japan has reconciled herself to a 20-year-plan conquest of China. Evidence of the desire for peace is much more valuable when it can be related from a particular context at first hand ; and the object of the present article is to add a further note to what evidence has already been produced by observers in various European countries.

My own experience of the crisis was somewhat novel in that it was obtained on a journey by boat from Alexandria to Venice. The boat was Italian, and the passengers nearly all Italians and Germans—the latter being in the majority. There was also a Czech woman who, as the crisis proceeded, grew more and more hostile to the company and finally took a table to herself. I naturally sympathised with her, but as she could speak neither French nor English and refused to speak German, there was little that I could do to ease the tension. We left Alexandria on September 24th (some British battleships had arrived the night before), when the situation was beginning to look ugly, and inevitably our conversation centred around politics. The first thing to strike my attention was the openness with which my German friends were willing to discuss the Sudeten problem ; the second was their complete conviction that the affair was purely private as between Germany and Czechoslovakia ; and the third, their quite immovable belief that Prague was a hotbed of the most livid Communism (bolstered up by Moscow), the presence of which was a menace to the health of the Reich.

Our only means of obtaining news was, of course, by Radio ; and here I must mention the extraordinary effect of the B.B.C.'s broadcasts in German, through which it was first brought home to both the Germans and Italians on board the fact that, in the event of war, France, England and finally America would almost certainly be ranged against them. I do not think I exaggerate when I say that this news (which was at first rejected as preposterous) had a most unnerving effect. I do not mean to suggest that it caused any panic ; no one could accuse either the German or Italian people of cowardice. The effect was more significant than that. I heard for the first time open expressions of bewilderment, even distrust, of Hitler's policy, combined with an intense desire to avoid war, especially with Britain.

Mussolini's speech was listened to deferentially by the foreigners, with childlike enthusiasm by the Italians (an attitude I had noticed in Libya). Hitler's speech, coming after the broadcasts already mentioned, was received in grim silence ; perhaps I was prejudiced in detecting something rebellious in the attitude of the Germans—sitting with heads bowed, supporting their heavy jaws with their hands, and standing up in a dazed condition when, at the conclusion of the delirious applause, the national anthem was played. It was a little while after this that one woman, who apparently found me a sympathetic conversationalist, said to me : " Only Chamberlain can save us now." Indeed, Mr. Chamberlain's speech was awaited with intense interest by everyone, and possibly brought more relief to those abroad than to those at home. The prevailing fear seemed to be not so much that Chamberlain would announce his intention of going to the aid of Czechoslovakia, as that he would fail to dissuade Hitler from acting in such a way as to render this course inevitable. " Hitler must be very sure," said one man with something like puzzled awe, " or he would not risk a world war for so small a piece of territory." The B.B.C.'s broadcast in German of Hitler's statement of his willingness to run such a ri.k had evidently had its effect.

One other circumstance during my conversation with German friends—needless to say our relations throughout all this time were of the most cordial nature, as anyone who has had any contact with Germans will understand (I mean contact in peacetime)—struck me as being especially significant. When the news came through of the A.R.P. preparations in London—trench-digging in the parks, concealing of traffic lights, alteration of tube-stations, &c.— a German (who was most friendly towards the English, if his conduct towards me was any guide) suggested to me that this must be the work of Jews, who hoped by such means to stir up a spirit of war in England against Germany. I did my best to point out to him that these preparations were the work of the Government, and that no body of persons, however fanatical, would be permitted to engage in such extensive public operations without the _ Government's consent. To this my friend replied, with a conviction which I found somewhat startling, that the Government of England, like that of France and Russia—indeed of all the democracies— was really in the hands of the Jews, who had chosen this moment to come into the open. It happened that at Brindisi I had been able to obtain a back-number of The Times (September 24th), in which there was an article describing similar preparations going forward in Berlin. Believing that this would carry greater conviction than any arguments of mine, I showed it to my friend. His reply, after a brief glance at the headings, was even more remarkable. The English Press, he said in the tone of one divulging information which had been withheld from me by sinister influences, was also controlled by Jews, who were merely trying to justify their warlike preparations by representing the Germans as indulging in the same diabolical practices as themselves. I asked him whither he was bound. " Berlin," he said.