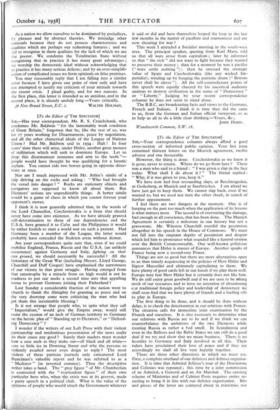 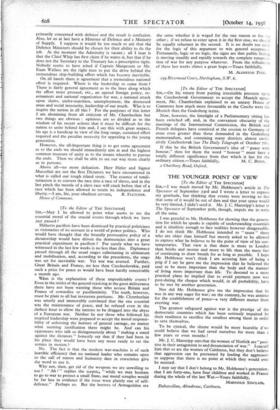 Page 19, 14 October 1938 — [To the Editor of THE SPECTATOR] Sra,—Your correspondence columns always
Close

[To the Editor of THE SPECTATOR] Sra,—Your correspondence columns always

afford a good cross-section of informed public opinion. Your last issue contained thirteen letters on the Munich agreement, twelve adverse and one favourable.

However, the thing is done. Czechoslovakia as we knew it is gone, never to return. Where do we go from here ? There was a man who said to a friend : " I was given a slap in the face today. What shall I do about it ? " The friend replied : " Why, if it was given to you, keep it."

We have now had four resounding slaps, at Berchtesgaden, at Godesberg, at Munich and at Saarbriicken. I am afraid we have just got to keep them. We cannot slap back, even if we wanted to, but we need not turn the other cheek, in search of further appeasement.

I feel there are two dangers at the moment. One is of harping on the past too much when the application of its lessons is what matters most. The second is of overstating the damage, bad enough in all conscience, that has been done. The Munich Agreement is certainly a milestone in our history but not a gravestone. Mr. Winston Churchill overdid the pessimism altogether in his speech in the House of Commons. We must not fall into the stagnant depths of pessimism and despair which led him to pronounce what sounded like a funeral oration over the British Commonwealth. One well-known politician announces that Hitler is master of Europe. Another speaks of France being now a second-rate Power.

Things are not so good but there are more alternatives open to us than tamely acquiescing in the policies of Herr Hitler and Signor Mussolini and ultimately capitulating to them. We have plenty of good cards left in our hands if we play them well. Europe may fear Herr Hitler but it certainly does not like him. We do still enjoy great goodwill and if we are seen to be taking stock of our resources and to have no intention of abandoning our traditional foreign policy and leadership of democracy we shall soon find that we have plenty of friends and a leading role to play in Europe.

The first thing to be done, and it should be done without delay, is to check the deterioration in our relations with France. The situation calls for immediate joint examination by the French and ourselves. It is also necessary to determine what our relations with Russia are to be and if we think we can counterbalance the ambitions of the two Dictators while treating Russia as rather a bad smell. In Scandinavia and even in the Balkans and the Baltic States we can still do a good deal if we try and show that we mean business. There is no hostility to Germany and Italy involved in all this. Their rulers have proclaimed their love of peace and if they act accordingly we shall all live very happily together.

There are three other directions in which we must act. First, a complete overhaul of our defences and defence organisa- tion. It is time that Admiral Jellicoe's tour of the Dominions and Colonies was repeated ; this time by a joint commission of an Admiral, a General and an Air Marshal. The existing scheme of Ministries and of Cabinet Posts requires entire re- casting to bring it in line with our defence organisation. Bits and pieces of the latter are scattered about in ministries not primarily concerned with defence and the result is confusion. Also, let us at last have a Minister of Defence and a Ministry of Supply. I suppose it would be too much to ask that the Defence Ministers should be chosen for their ability to do the job. At the moment the Admiralty is vacant ; all I hear is that the Chief Whip has first claim if he wants it, but that if he does not the Secretary to the Treasury has a prescriptive right. Nobody seems to have asked if Captain Margesson or Mr. Euan Wallace are the right men to put the drive behind the tremendous ship-building effort which has become inevitable.

On all hands there is agreement that a tremendous national effort is required. Where is the leadership to come from ? There is fairly general agreement as to the lines along which the effort must proceed, viz., an agreed foreign policy, re- armament and national organisation for war, a national attack upon slums, under-nutrition, unemployment, the distressed areas and social insecurity, leadership of our youth. Who is to inspire the nation in all this ? For the purposes of this letter I am abstaining from all criticism of Mr. Chamberlain but two things are obvious : opinions are so divided as to the wisdom of his recent actions that it must be difficult for the nation to unite behind him and, I say this with great respect, his age is a handicap in view of the long range, sustained effort required and the peculiar necessity for appealing to the young generation.

However, the all-important thing is to get some agreement as to the ends we should immediately aim at and the highest common measure of unity as to the means whereby to pursue the ends. Then we shall be able to sec our way more clearly as to persons.

Above all—no more defeatism. Herr Hitler and Signor Mussolini are not the first Dictators we have encountered in what is called our rough island story. The essence of totali- tarianism is to convert the race into a race of slaves, and in the last pinch the morale of a slave race will crack before that of a race which has been allowed to retain its independence and