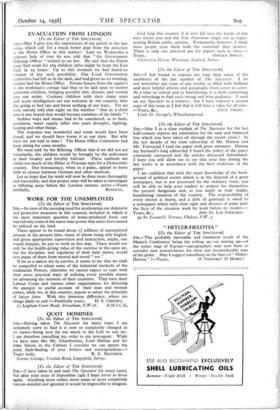 [To the Editor of THE SPECTATOR] SIR,—May I give you the experiences of my parish in the late crisis, which call for a much better plan from the autocrats at the Home Office in this matter? Late on Wednesday a spinster lady of over 6o was told that " the Government Billeting Officer " wished to see her. He said that the Parish must find room for 164 children (who might be from the East End) in 24 hours. Up to this moment we had heard no whisper of any such possibility. Our Local Government authorities had left us in the dark, and had given us no warning, neither had the Home Office. Private houses from the squire's to the workman's cottage had thus to be laid open to receive unknown children, bringing possibly dirt, disease, and vermin into our midst. Cockney children with their sharp ways and acute intelligences are not welcome in the country, they like going to bed late and know nothing of our ways. Yet we were naively told that night on the wireless " that in a short time it was hoped they would become members of the family " !

Sudden ways and means had to be considered, as to beds, sanitation, water supply (after two years drought), lighting, heating and other things.

The response was wonderful and room would have been found, and we should have borne it as our duty. But why were we not told in time ? The Home Office Committee had been sitting for some months.

We were told by the Billeting Officer that if we did not act voluntarily, the children would be brought by the policemen of their locality and forcibly billeted. These methods are rather too much of the Hitler or Prussian type for a Democratic country. Our bureaucracy, when in a panic, appear to leave little to choose between German and other methods.

Let us hope that the work will now be done more thoroughly and reasonably, and that proper steps will be taken to investigate in billeting areas before the London swarms arrive.—Yours