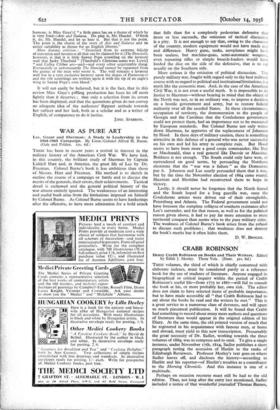 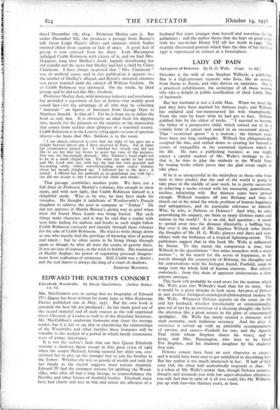 Henry Crabb Robinson on Books and Their Writers. Edited by Edith J. Morley. Three Vols. (Dent. 31s. 6d.) THESE volumes, the third of which is chiefly concerned with elaborate indexes, must be considered partly as a reference book for the use of students of literature. Anyone engaged in biographical or critical inquiry within the period of Crabb Robinson's useful life—from 1775 to i867—will fail to consult the book at his, or more probably her, own risk. The editor does not claim to have selected items of probable importance, but to have made accessible all " that Crabb Robinson had to say about the books he read and the writers he met." This is a great service to a numerous class of devotees, and will spare us much piecemeal publication. It will be found that Crabb had something to record about many more authors and questions of literature than would appear in the original edition of his Diary. At the same time, the old printed version of much that he registered in his acquaintance with famous men, at home and abroad, must yield to this new transcription. Presumably the great' necessity of Dr. Sadler, workbag towards the three volumes of 1869, was to compress and to omit. To give a single instance, under November 17th, 1814, Sadler publishes a short paragraph noting the accession of Hazlitt to the ranks of Edinburgh Reviewers. Professor Morley's text goes on where Sadler leaves off, and discloses the history—according to Hazlitt and his reporter—of Hazlitt's troubles as a contributor to the Morning Chronicle. And this instance is one of a multitude.

Perhaps on occasion recourse must still be had to the old edition. Thus, not long after the entry just mentioned, Sadler included a notice of that -wonderful journalist-Thonaas-Bames,

dated December 7th, 1814: Professor Morley cuts it. But under December 8th, she produces a passage from Barnes's talk about Leigh Hunt's affairs and opinions which Sadler omitted either from caution or lack of space. A good deal of gossip is now released from the diary. Lady Blessington indulged Crabb Robinson with plenty of it, and we find Mrs. Hoppner, long after Shelley's death, happily distributing her old scandal and the news that Shelley had had a child by Claire Clairmont. I have always suspected that " Mrs. Clairmont " was an artificial name, and in this publication it appears so ; the mother of Shelley's alleged, and Byron's detested, mistress was never married until she carried off William Godwin. Or so Crabb Robinson was informed. On the whole, he liked gossip, and he did not like Mrs. Godwin.

ProfesSor Morley then, with immense industry and resolution, has provided a repository of fact or fiction—but mainly gbod sound fact—for the advantage of all who may be collecting " materials " on figures of literature from George Dyer to Matthew Arnold. Is that all ? Far be it from me to define the book as only that. It is obviously an ideal book for dipping into, merely for the pleasure or the surprise or the instruction that comes from sudden clear glimpses of a vanished society. Crabb Robinson is in the Louvre (1814 again—a year of specious liberty)—he hears that Mrs. Siddons is in the room.

" I am almost ashamed to own that the sight of her gave me a delight beyond almost any I have received in Paris. Yet at times her countenance pained me. I watched her closely and did not like to see her knit her brows to assist her view of the pictures. Nor was she becomingly dressed ; Mrs. Siddons's head ought not to be in a small chipped hat. Yet when she spoke to her sister and Mr. Lock who was with her she had her own graceful and fascinating smile, which notwithstanding some coarse features about her mouth delighted me. I followed her to the door ; it rained. I offered her my umbrella as no gentleman was with her ; she did not accept it, but I received her smile and thanks . . ."

That passage establishes another point. We have not a full diary in Professor Morley's volumes, but enough to show again, and with new light, that Crabb Robinson himself is a delightful study. Wise as he was, he may have made his mistakes. He thought it indelicate of Wordsworth's French daughter to address the poet in company as " Father." He did not approve of Martin Burney's giving way to grief when their old friend Mary Lamb was being buried. But such things make character, and it may be said that a reader with very little feeling for authors and books as such might follow Crabb Robinson curiously and intently through these volumes for the sake of Crabb Robinson. He tried to write things down as one who merely had the privilege of knowing men of genius and talent ; but he often seems to be living things through again as though he after all were the centre of gravity there. It was no case of jealousy, or the wish to belittle. His treatment of Hazlitt displays his power of separating personal disagree- ment from realisation of eminence. Still, Crabb was a diarist ; and the real diarist is always the king of a court of shadows.