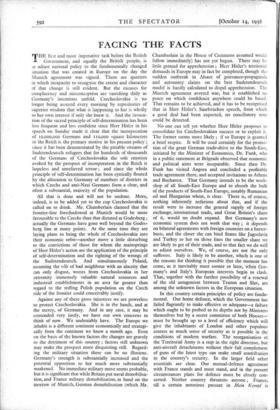 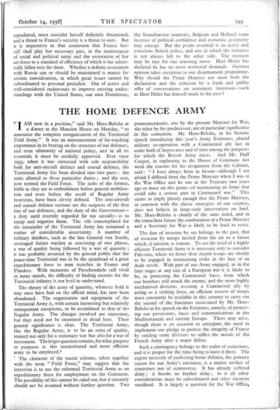 THE first and most imperative task before the British Government, and equally the British people, is ;.o adjust national policy to the fundamentally changed situation that was created in Europe on the day the Munich agreement was signed. There are quarters in which incapacity to recognise the extent and character of that change is still evident. But the excuses for complacency and misconception are vanishing daily as Germany's intentions unfold. Czechoslovakia is no longer being assured every morning by repositories of superior wisdom that what is happening to her is wholly to her own interest if only she knew it. And the invoca- tion of the sacred principle of self-determination has been less frequent and less confident since Herr Hider in his speech on Sunday made it clear that the incorporation of to,000,000 Germans and t to,000 square kilometres in the Reich is the primary motive in his present policy ; since it has been demonstrated by the pitiable streams of Sudetendeutsch refugees that for hundreds of thousands of the Germans of Czechoslovakia the sole emotion evoked by the prospect of incorporation in the Reich is hopeless and unrelieved terror ; and since the whole principle of self-determination has been cynically flouted by the allocation to Germany of numbers of districts in which Czechs and anti-Nazi Germans form a clear, and often a substantial, majority of the population.

All that is done and will not be undone. More, indeed, is to be added yet to the cup Czechoslovakia is called on to drink. Mr. Chamberlain claimed that the frontier-line foreshadowed at Munich would be more favourable to the Czechs than that dictated at Godesberg ; actually the Germans have gone well beyond the Godes- berg line at many points. At the same time they are laying plans to bring the whole of Czechoslovakia into their economic orbit—another move a little disturbing to the convictions of those for whom the mainsprings of Herr Hitler's action are the application of the principle of self-determination and the righting of the wrongs of the Sudetendeutsch. And simultaneously Poland, assuming the role of bad neighbour with an alacrity that can only disgust, • wrests from Czechoslovakia in her extremity immensely valuable natural resources and industrial establishments in an area far greater than regard to the trifling Polish population on the Czech side of the frontier could conceivably justify.

Against any of these gross injustices we are powerless to protect Czechoslovakia. She is in the hands, and at the mercy, of Germany. And in any case, it may be contended very justly, we have our own concerns to think of now. We undeniably have. The Europe we inhabit is a different continent economically and strategi- cally from the continent we knew a month ago. Even on the basis of the known factors the changes are gravely to the detriment of this country ; factors still unknown may make the prospect more disquieting still. Regard- ing the military situation there can be no illusions. Germany's strength is substantially increased and the potential opposition to her much more substantially weakened. No immediate military move seems probable, but it is significant that while Britain put naval demobilisa- tion, and France military demobilisation, in hand on, the morrow of Munich, German demobilisation (which Mr. Chamberlain in the House of Commons assumed would follow immediately) has not yet begun. There may be little ground for apprehension ; Herr Hitler's territorial demands in Europe may in fact be completed, though the sudden outbreak in Alsace of grievance-propaganda and autonomy claims on the best Sudetendeutsch model is hardly calculated to dispel apprehension. The Munich agreement averted war, but it established no peace on which confidenCe anywhere could be based. That remains to be achieved, and it has to be recognised that in Herr Hitler's Saarbrilcken speech, from which a good deal had been expected, no conciliatory note could be detected.

No one can tell yet whether Herr Hitler proposes to consolidate his Czechoslovakian success or to exploit it. The former seems more likely ; if so Europe is granted a brief respite. It will be used certainly for the promo- tion of the great German trade-drive to the South-East, initiated by the Minister of Economics, Dr. Funk, who in a public statement at Belgrade observed that economic and political aims were inseparable. Since then Dr. Funk has visited Angora and concluded a profitable trade agreement there; and accepted invitations to Athens and Bucharest. That Germany intends to be the work- shop of all South-East Europe and to absorb the bulk of the products of South-East Europe, notably Rumanian oil and Hungarian wheat, is clear. There is, of course, nothing inherently nefarious about that, and if the result were to increase the general supply of foreign exchange, international trade, and Great Britain's share of it, would no doubt expand. But Germany's new economic system does not work that way ; it depends on bilateral agreements with foreign countries on a barter- basis, and the closer she can bind States like Jugoslavia and Turkey to her on those lines the smaller share we are likely to get of their trade, and to that fact we do well to adjust ourselves. We, of course, are not the only sufferers. Italy is likely to be another, which is one of the reasons for thinking it possible that the moment has come, as it inevitably must sooner or later, when Ger- many's and Italy's European interests begin to clash. That, together with the further possibility of a renewal of the old antagonism between Teuton and Slav, are among the unknown factors in the European situation.

In this country certain principles of policy are funda- mental. Our home defence, which the Government has failed flagrantly to make effective or adequate—a failure which ought to be probed to its depths not by Ministers themselves but by a secret committee of both Houses— must be brought up to a level of efficiency which will give the inhabitants of London and other populous centres as much sense of security as is possible in the conditions of modern warfare. The reorganisation of the Territorial Army is a step in the right direction, but anti-aircraft detachments without their full complement of guns of the latest type can make small contribution to the country's security. In the larger field other essentials are clear. Our mutual-defence agreement with France stands and must stand, and in the present circumstances plans for defence must be closely con- certed. Neither country threatens anyone ; France, till a certain notorious passage in Man Kampf is repudiated, must consider herself definitely threatened, and a threat to France's security is a threat to ours. But it is imperative in that connexion that France her- self shall play her necessary part, in the maintenance of social and political unity and the restoration of her air-force to a standard of efficiency of which it has admit- tedly fallen very far short. Whether a definite association with Russia can or should be maintained is matter for serious consideration, in which great issues cannot be subordinated to personal prejudice. Out of active and well-considered endeavours to improve existing under- standings with the United States, our own Dominions, the Scandinavian countries, Belgium and Holland some increase of political confidence and economic prosperity may emerge. But the prime essential is an active and conscious British policy, and one in which the initiative is not always left to the other side. The moment may be ripe for one arresting move. Herr Hitler has declared he has no more territorial demands. German opinion takes exception to our disarmament programme. Why should the Prime Minister not meet both the declaration and the criticism by a frank and public offer of conversations on armament limitation—such as Herr Hitler has himself made in the past ?