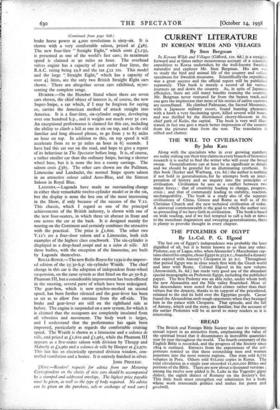 Page 42, 14 October 1938 — The last era of Egypt's independence was probably the least
Close

The last era of Egypt's independence was probably the least

dignified of all, but it is better known to us than any other. Ptolemy, son of Lagus, who, when Alexander's Macedonian cap- tains shared his empire, chose Egypt in 323 B.c., founded a dynasty that expired with Antony's Cleopatra in 3o B.c. Throughout that period Egypt was in close touch first with the Greek world and later with Rome. Colonel Elgood in his new volume (Arrowsmith, 8s. 6d.) has made very good use of the abundant special monographs on Ptolemaic Egypt, including the published papyri. The first Ptolemy was an able ruler, under whom both the new Alexandria and the Nile valley flourished. Most of his descendants were noted for their crimes rather than their virtues but the dynasty, thanks to its support of the priesthood, retained to the end its hold over the Egyptian people. Caesar found the Alexandrian mob tough opponents when they besieged NM in the palace with Cleepatra. That episode, and the fall of Antony, which end the story, are familiar, but the account of the earlier Ptolemies will be as novel to many readers as it is interesting.