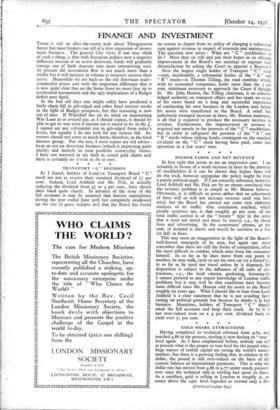 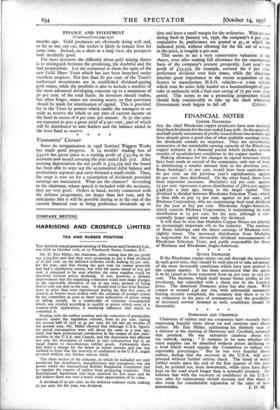 THERE is still an after-the-storm look about Throgmorton Street but most brokers can tell of a slow expansion of invest- ment business. The general City view, if one may think of such a thing, is that with European politics now a negative influence instead of an active deterrent, funds will gradually emerge out of bank deposits into more enterprising uses. At present the investment flow is not much more than a trickle but it will increase in volume as investors recover their nerve. Meanwhile we are back on the old American trade- commodity prices axis with the important difference that it is now quite clear that on the home front we must face up to accelerated rearmament and the ugly implications of a Budget deficit next April.

In the bad old days one might safely have predicted a fairly sharp fall in gilt-edged and other fixed" interest stocks in the light of Budget prospects, but this reasoning is now out of date. If Whitehall has set its mind on maintaining War Loan at or around par, as I should expect, it should be able to get its way even if income tax is raised to 6s. in the £. I cannot see any substantial rise in gilt-edged from today's levels, but equally I do not look for any serious fall. In- vestors should not come to much harm, therefore, in the fixed interest group. For the rest, I must repeat my old advice : keep an eye on American business (which is improving quite nicely) and include in your portfolio commcdity shares. I have not wavered in my faith in sound gold shares and there is certainly no reason to do so now. * * * *

As I feared, holders of Lond cn Transport Board " C' stock are not to receive their standard dividend of 51 per cent. Indeed, Lord Ashfield and Mr. Pick, in actually reducing the dividend from 41 to 4 per cent., have shown their hand quite clearly. In advance of the issue of the full accounts it may be assumed that heavier expenditure during the year ended June 3oth last completely swallowed up the rise in gross receipts and that the Board has found no reason to depart from its policy of charging a substantial sum against revenue in respect of renewals and maintenance. The question now arises : What are " C " stockholders to do ? Must they sit still and pin their hopes in an ultimate improvement in the Board's net earnings or register their dissatisfaction by asking the Court to appoint a Receiver ?

Now the largest single holder of Transport " C " stock —and, incidentally, a substantial holder of the' " A " and " B " stocks—is Thomas Tilling, the road combine which, with its associated companies, holds more than the 5 per cent. minimum necessary to approach the Court if thought fit. Mr. John Heaton, the Tilling chairman, is an acknow- ledged authority on transport affairs and has made no secret of his views based on a long and successful experience of conducting his own business in the London area before his assets were transferred to the Board. A small but judiciously arranged increase in fares, Mr. Heaton maintains, is all that is required to produce the necessary increase in revenue. Furthermore, the improvement in revenue is required not merely in the interests of the " C " stockholders but in order to safeguard the position cf the " A " and " B " stocks whose sinking funds, contingent on the standard dividend on the " C " stock having been paid, come into operation in a few years' time.

At first sight this seems to me an impressive case. I am certainly in favour of a small increase in fares in the interests of stockholders if it can be shown that higher fares will do the trick, however unpopular the policy might be from a purely political angle. If I am correctly informed, however, Lord Ashfield and Mr. Pick are by no means convinced that the revenue problem is as simple as Mr. Heaton believes. Obviously, it is difficult to prove either that an adjustment of fares will or will not increase revenue until you have tried, but the Board has carried out some very elaborate analyses of its traffic. One conclusion reached, which greatly surprises me, is that roughly 4o per cent. of the total traffic carried is of the " luxury " type in the sense that it need not travel and must be wooed, e.g., by cheap fares and advertising. In the economists' phrase, 4o per cent. of demand is elastic and would be sensitive to a rise (or fall) in fares.

This may seem an exaggeration in the light of the Board's well-known monopoly of its area, but again one must remember that there are still the forms of competition, often the most difficult to combat, which arise from the consumer himself. In so far as he does move from one point to another, he may walk, cycle or use his own car (or a friend's) ; in so far as he need not travel unless he is disposed, his disposition is subject to the influence of all sorts of dis- tractions, e.g., the local cinema, gardening, listening-in. I cannot pretend to any expert knowledge of London traffic problems but it may well be that conditions have become more difficult since Mr. Heaton sold his assets to the Board roughly six years ago. What I should- like to hear from Lord Ashfield is a clear statement that, he is not avoiding fare- raising on political grounds but because he thinks it is bad business. Meantime, holders of *Transport " C " should await the full accounts and keep their. stock. At 72 it is not over-valued even on a 4 per cent. dividend basis to yield over 5i per cent.

Having completed its 'technical rebound from 4.6o, and touched 4.86 in the process, sterling is now finding its " true " level again. As I have emphasised before, nobody can tell at present what is the proper or true level for the pound when huge masses of mobile capital are roving the world's money markets, but there is a growing feeling that, in relation to the dollar, the pound is still over-valued on the basis of the current balance of international payments. This is why the dollar rate has moved from 4.86 to 4.77 under steady pressure ever since the technical rally in sterling had spent its force. As a corollary, gold is selling in London at roughly 5s. an ounce above the x4os. level regarded as normal only a few (Continued on page 634.) FINANCE AND INVESTMENT (Continued from page 632) months ago. Gold producers are obviously doing well and, so far as one can see, the wicket is likely to remain firm for some time. Indeed, on a short or a long view, the prospects look decidedly good.

For most investors the difficulty about gold mining shares is to distinguish between the promising, the doubtful and the bad propositions. Let me commend to them the units of the new Gold Share Trust which has just been launched under excellent auspices. Not less than 8o per cent. of the Trust's authorised investments are in established dividend-paying gold mines, while the portfolio is also to include a number of the more advanced developing concerns up to a maximum of zo per cent. of the total funds. As investors should realise, but often forget, mines are wasting assets, so that provision should be made for amortisation of capital. This is provided for in the Trust by powers which enable the managers to set aside as reserve the whole or any part of current income on the fund in excess of 6 per cent. per annum. At 5s. the units are expected to give a gross yield of 9 per cent., part of which will be distributed to unit holders and the balance added to the trust fund as reserve. * * * * Venturers' Corner Since its reorganisation in 1936 Sentinel Waggon Works has made good progress. A 14 months' trading loss of £4,216 has given place to a trading profit of £35,764 in the accounts now issued covering the year ended July 31st. After meeting depreciation the net profit is £23,529 and the board has been able to wipe out the accumulated debit balance and preliminary expenses and carry forward a small credit. Thus, the stage is now set for a resumption of dividends provided earnings are maintained. What are the chances? According to the chairman, whose speech is included with the accounts, they are very good. Orders in hand, mostly connected with the defence programme, are larger than last year, and he anticipates that it will be possible during or at the end of the current financial year to bring preference dividends up to