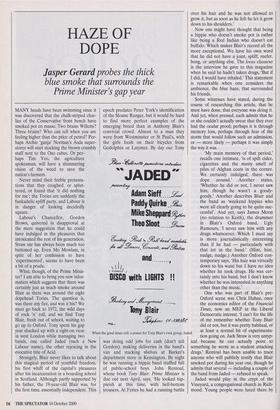 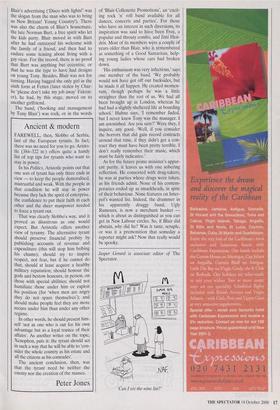 MANY heads have been swimming since it was discovered that the chalk-striped char- lies of the Conservative front bench have smoked pot en masse. Two brains Willetts? Three brains? Who can tell when you are feeling higher than the price of petrol? Per- haps Archie `ganja' Norman's Asda super- stores will start stocking the brown crumbly stuff next to the Oxo cubes. Or per- haps Tim Yeo, the agriculture spokesman, will have a shimmering vision of the weed to save the nation's farmers.

Never mind their feeble protesta- tions that they coughed, or splut- tered, or found that 'it did nothing for me'; the Tories are suddenly the funkadelic spliff party, and Labour is in danger of looking decidedly square.

Labour's Chancellor, Gordon Brown, quivered in disapproval at the mere suggestion that he could have indulged in the pleasures that intoxicated the rest of his generation. Straw snr has always been much too buttoned up. Even Mo Mowlam, in spite of her confession to have `experimented', seems to have been a bit of a prude.

What, though, of the Prime Minis- ter? I am able to bring you new infor- mation which suggests that there was certainly just as much smoke around Blair as there was around the eight dopehead Tories. The question is, was there any fire, and was it his? We must go back to 1972, the wild days of rock 'n' roll, and we find Tony Blair, fresh out of school, waiting to go up to Oxford. Tony spent his gap year shacked up with a right-on vicar in west London while managing two bands, one called Jaded (such a New Labour name), the other rejoicing in the evocative title of Acid.

Strangely, Blair never likes to talk about this magical period of youthful freedom, his first whiff of the capital's pleasures after his incarceration in a boarding school in Scotland. Although partly supported by his father, the 19-year-old Blair was, for the first time, essentially independent. This

epoch predates Peter York's identification of the Sloane Ranger, but it would be hard to find more perfect examples of the emerging breed than in Anthony Blair's convivial crowd. Almost to a man they were from Westminster or St Paul's, with the girls fresh on their bicycles from Godolphin or Latymer. By day our Tony

and DISCO with LIGHTS !!

was doing odd jobs for cash (don't tell Gordon), making deliveries in the band's van and stacking shelves at Barker's department store in Kensington. By night he was running a hippie band stuffed full of public-school boys. John Rentoul, whose book Tony Blair: Prime Minister is due out next April, says, 'He looked hip- pieish at this time, with bell-bottom trousers. At Fettes he had a running battle

over his hair and he was not allowed to grow it, but as soon as he left he let it grow down to his shoulders.'

Now one might have thought that being a hippie who doesn't smoke pot is rather like being a Red Indian who doesn't eat buffalo. Which makes Blair's record all the more exceptional. We have his own word that he did not have a joint, spliff, reefer, bong, or anything else. The locus classicus is the interview he gave to this magazine when he said he hadn't taken drugs, 'But if I did, I would have inhaled.' This statement is remarkable when one considers the ambience, the blue haze, that surrounded his friends.

Some witnesses have stated, during the course of researching this article, that he must have done, that everyone was doing it. And yet, when pressed, each admits that he or she couldn't actually swear that they ever had the ocular proof; perhaps it is through memory loss, perhaps through fear of the storm that would follow such an admission, or — more likely — perhaps it was simply the way it was.

'My main memory of that period,' recalls one intimate, 'is of spilt cider, cigarettes and the musty smell of piles of Afghan coats in the corner, We certainly indulged; there was dope around,' Another states, `Whether he did or not, I never saw him, though he wasn't a goody- goody.' Another describes Blair and the band as 'weekend hippies who were all clearly going to be quite suc- cessful'. And yet, says James Moon (no relation to Keith), the drummer in Blair's Oxford band, Ugly Rumours, 'I never saw him with any drugs whatsoever. Which I must say is more journalistically interesting than if he had — particularly with that lot in the band.' (Hint, hint, nudge, nudge.) Another Oxford con- temporary says, 'His hair was virtually down to his waist but I have no idea whether he took drugs. He was cer- tainly into his band, but I don't know whether he was interested in anything other than the music.'

One who was part of Blair's pre- Oxford scene was Chris Huhne, once the economics editor of the Financial Times, now an MEP in the Liberal Democratic interest. can't for the life of me remember whether Tony Blair did or not, but it was pretty habitual, or at least a normal bit of experimenta- tion going on. Jack Straw is very untyp- ical because he can actually point to something he wrote as a student attacking drugs.' Rentoul has been unable to trace anyone who will publicly testify that Blair smoked pot during his year out, though he admits that several — including a couple of the band from Jaded — refused to speak.

Jaded would play in the crypt of the Vineyard, a congregational church in Rich- mond. Young people were lured there by

Blair's advertising (`Disco with lights!' was the slogan from the man who was to bring us New Britain! Young Country!). There was also the charm of Blair's housemate, the late Norman Burt, a free spirit who let the kids party. Blair moved in with Burt after he had outstayed his welcome with the family of a friend, and then had to endure some teasing about living with a gay vicar. For the record, there is no proof that Burt was anything but eccentric, or that he was the type to have had designs on young Tony. Besides, Blair was not for turning. Having bagged the only girl in the sixth form at Fettes (later stolen by Char- lie 'please don't take my job away' Falcon- er), he had, by this stage, moved on to another girlfriend.

The band, (`booking and management by Tony Blair') was rock, or in the words of `Blair-Colienette Promotions', an 'excit- ing rock 'n' roll band available for all dances, concerts and parties'. For those who have an interest in such diversions, its inspiration was said to have been Free, a popular and throaty combo, and Jimi Hen- drix. Most of its members were a couple of years older than Blair, who is remembered as something of a Good Samaritan, help- ing young ladies whose cars had broken down.

`His enthusiasm was very infectious,' says one member of the band. 'We probably would not have got off our backsides, but he made it all happen. He created momen- tum, though perhaps he was a little straighter than the rest of us. We had all been brought up in London, whereas he had had a slightly sheltered life at boarding school.' Huhne says, remember Jaded, but 1 never knew Tony was the manager. I am astonished. Are you sure?' Were they, I inquire, any good. 'Well, if you consider the horrors that did gain record contracts around that time, if they didn't get a con- tract they must have been pretty terrible. I don't really remember their music, which must be fairly indicative.'

As for the future prime minister's appar- ent purity, it leaves us with one sobering reflection. He consorted with drug-takers; he was at parties where drugs were taken, as his friends admit. None of his contem- poraries ended up as smackheads, in spite of their behaviour. None features on Inter- pol's wanted list. Indeed, the drummer in his apparently druggy band, Ugly Rumours, is now a merchant banker — which is about as distinguished as you can get in New Labour circles. So, if Blair did abstain, why did he? Was it taste, scruple, or was it a premonition that someday a reporter might ask? Now that really would he spooky.

Jasper Gerard is associate editor of The Spectator.