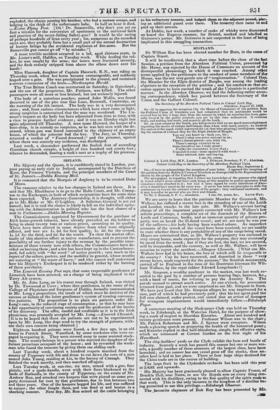 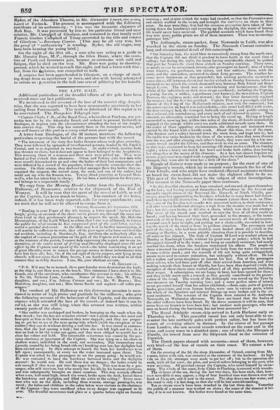 Sir William Rae has been elected member for Bute, in the room of Captain Stuart.

It will be recollected, that a short time before the close of the last Session, a petition from the Aberdeen Political Union, presented tby Mr. Hume, was rejected by the House of Commons on account of the disrespectful phraseology in which it was couched. Among' other terms applied by the petitioners to the conduct of some members of the House, was the not very gentle one of " tergiversation." Colonel Hay', the Member for the Elgin district of Burghs, was among the leading objectors to the reception of the petition; his conduct on that oc- casion appears to have excited the wrath a the Unionists in a particular manner. In the Aberdeen Observer, we find the following rather amus- ing correspondence, which has passed between the Secretary of the Union and the Gallant Colonel.

The Secretary of Me Aberdeen Political Union to Colonel Leith Hay.

Aberdeen, August 57, 1833. Sir-If in opposing the reception (by the House of Commons) of the petition fame the Political Union of Aberdeen you had caloulated that its sentiments would be

avowed but by i few, I hope that, from the manner in which its rejection has been gene-

rally treated n the public journals, you are by this time undeceived. It contains truth, and nothing but truth, and scarcely all the truth._ Sir, on your return to the North, you will perceive that we are much moreenlightenet regarding the merits of certain individuals, than when, with much anxiety, we awaited

the arrival of the coach which conveyed the (at that time pleasing) intelligence, regard-

ing the success of Colonel Hay for the Elgin district of Burghs.

You say you know us-hark you, Sir ;

There's what you never DREAMT in us ;

There's energy UNTRIED in us.

Some friendless are, I truly grant ;

Colonel A Leith May, M.P., London. J. DUNCAN, Secretary, P. U., Aberdeen. Colonel Leith Hay to the Secretary of the Aberdeen Political Union. Herne Bay, September 1. Sir,-I have to acknowledge the reception of your letter. I opposed the reception of the petition from the Political Union of Aberdeen as disrespectful to the Representatives chosen by the people of the United Kingdom. The newspapers, in reporting that I stated my knowledge of the persons who signed it, stated what I never could have said, being at this moment in perfect ignorance what signatures were attached to it ; but had it been signed by every inhabitant of Aber- deen I should have acted in the same way. It never has been my principles to stifle the sentiments or thwart the rational wishes of the people; they continued unaltered, and it may hereafter be proved who are their real friends. To Mr. J. Duncan, S. P. U., Aberdeen. I am, Sir, yours, &e., LEITH We are sorry to learn that the patriotic Member for Greenock, Mr.

Wallace, has suffered a severe loss in the stranding of one of the Leith

and London smacks in the late gale. Mr. Wallace's servant having

charge of all the important papers connected with Mr. Wallace's law

reform proceedings, a complete set of the Journals of the Houses of Lords and Commons, books, and an immense quantity of private pro- perty, was on board the ill-fated vessel; and we are sorry he was one of the sufferers—his body having been washed ashore. As imperfect accounts of the wreck of the vessel have been received, we are unable to state whether there is any probability of any of the cargo being saved. Hopes are entertained that, as Mr. Wallace's property was enclosed in very strong boxes, made expressly for the purpose, they may eventually be saved from the wreck ; but if they are lost, the loss, we are assured, will be irreparable, and the country, as well as Mr. Wallace, will have occasion to regret the accident.—Glasgow Chronicle. [What can Mr. Wallace have had in his boxes, the loss of which will be irreparable to the country ? Can he have recovered, and deposited in those "very strong boxes, made expressly for the purpose," the Scottish muniments, carried off to England in the time of his illustrious kinsman Sir Wil- liam Wallace, by the royal robber Edward Longshanks ?] Mr. Simpson, a wealthy poulterer in the market, was last week es- corted to the gaol by a number of persons bearing flags, banners, &c., with a band of music, for rsfasing to pay the Annuity Tax. The parade seemed to attract much notice. At one o'clock, the procession returned from gaol, and we were surprised to see Mr. Simpson in front. We have just heard that Mr. Simpson alleges he was imprisoned for a sum, part of which he had previously paid ; that his law agent paid the full sum claimed, under protest, and stated that an action of damages for wrongous imprisonment would immediately follow.—Edinburgh Paper.

A numerous meeting of the Shakspeare Club was held on Thursday week, in Edinburgh, at the Waterloo Hotel, for the purpose of show- ing a mark of respect to Sheridan Knowles. About one hundred and twenty gentlemen were present. Professor Wilson was in the chair; Mr. Patrick Robertson and Mr. J. Spence were croupiers. Wilson made a glowing speech on proposing the health of the honoured guest ; and Knowles replied in that half-blundering, simple, but effective style, which we witnessed at Covent Garden on the first night of 'his Hunchback.

The ship-builders' yards on the Clyde exhibit the hum and bustle of industry. Scarcely a week has passed this season but one or more ves- sels, a goodly number of them steamers of the largest class, have been launched ; and no sooner has one vessel gone off the stocks, than an- other keel is laid in her place. Three or four large ships destined for the China trade are in the course of building.

The large fruit in the Clydesdale orchards has been sold this year at 2,8501. and upwards.

- His Majesty has been graciously pleased to allow Captain Frazer, of Brackla Hall, near Nairn, to use the Royals arm on every thing con- nected with his distillery, owing to the fine quality of the spirit madeat that work. This is the only instance in the kingdom of a distiller be- ing permitted to use this privilege.—Edinburgh Observer.

The favourite claymore of Rob Roy has been presented by Mr. Ryder, of the Aberdeen Theatre, to Mr. Alexander k reser, the young Laird ut Toi heck. The present is accompanied with -the following certificate of its authenticity : " his was the favourite claymore of Rob Roy. It.was presented by him to his particular friend and near relative, Mr. Campbell of Glenlyon, and remained in that family until Francis Gordon Caaipbell of Troup succeeded to the title and estates of Glenlyon."—Inverness Courier. [This may be all very true, but the inlay' of " authenticity " is wanting. Ryder, the old stager, may have been hoaxing the young laird.] On the night of the 31st ult., a man who was acting as a guide to Mr: Horatio Ross, M. P., through the Glen Bruer, where the coun- ties of Perth and Inverness join, became so overcome with cold and fatigue, that he died on the way. Mr. Ross was going to shooting- ground, which he wished to reach that night, and had a horse with him ; but, from the ittykriess, was compelled to walk.

A surgeon has been apprehended in Glasgow, on a charge of steal- ing drugs from an apothecary in town, and also with haviiig attempted to seduce an ; menace in the hall into acts of pilfering for his benefit.