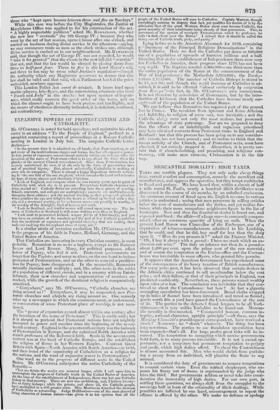 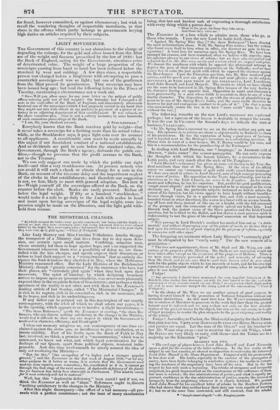 TAXES are terrible plagues. They not only make cheap things dear, curtail comfort and consumption, manacle the merchant and manufacturer, and oppress the operative, but they tempt multitudes to fraud and perjury. We have heard that, within a circuit of half a mile round St. Paul's, nearly a hundred illicit distilleries were discovered in the course of six months, by an unbribed exciseman. An enormous amount of fraud upon the English revenue in various articles is undoubted ; seeing that men persevere in selling articles below the cost of manufacture and the duties, and yet realize for- tunes, while their more scrupulous neighbours figure in the list of bankrupts. Now and then time fraudulent dealer is found out, and exposed and fined : the affair—if a large one—is commonly compro- mised, after an enormous quantity of lying on oath. When the present Lord Rimier was Chancellor of time Exchequer, one of a deputation of' tobacco-manufacturers admitted to his Lordship, that he could, and that he did, buy snuff for less than the duty upon it. " How do you procure it ?" asked the Finance Minister. " Oh, I buy it always with a permit : I have no stock which an ex- ciseman can seize." The duty on tobacco was then 3s. a pound-- about 1,200 per cent. upon the prime cost of the raw material; and of course the temptation at the Excise-office and time Custom- house was irresistible to some officers, who granted false permits.

It appears that time American Government has experienced some of the consequences of its heavy taxation of British manufactures. For many years past, it has been observed that certain dealers in the Atlantic cities continued to sell merchandise below the cost price ; and their failure, or that of their principals in England, was predicted confidently. Nevertheless, these persons waxed wealthy upon sales at a loss. The conclusion was inevitable that they con- trived to cheat the Customhouse : but how ? At last a gigantic smuggling speculation has been discovered. Broad cloths wrapped up in bales of flannel have been introduced and taxed as flannel; goods worth 20s. a yard have passed the Customhouse at the rate of 2s. Time parties to the detected fraud happen to be all York- shireinen—it is very unlike Yorkshire to be found out. Mercan- tile morality is disconcerted. " Commercial honour, common in- tegrity, national character, upright principle"—all these, says the Murniag Chronicle's grandiloquent correspondent, have received a shock I Nonsense : no " shock" whatever. The thing has been long notorious. The parties to one frandulent speculation have been exposed—that's all. For large profits great risks will be in- curred. The temptation to smuggling which unwise governments hold forth, is to many persons irresistible. It is not a casual op- portunity, net a temporary but permanent temptation to perjury and profit, which high duties afford. To cheat the Customhouse is almost accounted fair. Men who would shrink from purloin- ing a penny from an individual, will plunder the State to any amount.

It is considered the duty of governments to remove temptations to commit certain vices. Even the robbed shopkeeper, who ex- poses his finery out of doors, is reprimanded by the judge who tries the thief. But governments seldom or never take into consi- deration the immorality of high duties. For our own part, in settling these questions, we always shift from the smuggler to the sovereign half at least of the criminality of illicit dealings. While penalties are inflicted by one hand, encouragement to repeat the offence is offered by the other. We make no defence or apology

for fraud, however committed, or against whomsoever ; but wish to recall the wandering thoughts of respectable moralizers, to that share in the offence which justly belongs to governments levying high duties on articles required by their subjects.