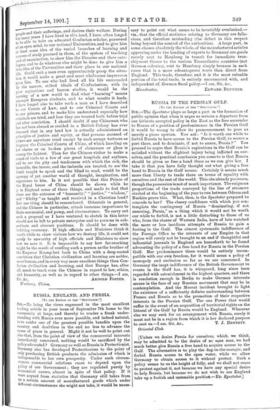 rTo THE EDITOR OF THE " SPECTATOR.1

Sut,—To bring the views expressed in the most excellent leading article in your issue of September 7th home to the community at large, and thereby to render a frank under- standing with Russia ever more possible, and indeed natural, is to confer one of the greatest possible benefits upon the country, and doubtless in the end no less to advance the cause of peace in generaL Might it not be well to point out also that, from the point of view of the commercial interests immediately concerned, nothing would be sacrificed by the Policy advocated? Germany as well as Russia is Protectionist. Germany also has developed Protectionism to the point of only purchasing British products the admission of which is indispensable to her own prosperity. Under such circum- stances commercial relations cease to depend upon the Policy of our Government; they are regulated purely by economical causes, almost in spite of that policy. If it were argued from statistics that Germany still takes from US a certain amount of manufactured goods which under different circumstances she might not take, it would be neoes-

sary to point out what seems to be invariably overlooked,— viz., that the official statistics relating to Germany are falla- cious, and therefore misleading (the defect in this respect being beyond the control of the authorities). A large part, in some classes absolutely the whole, of the manufactured articles appearing under the heading of exports to Germany are goods merely sent to Hamburg in transit for immediate tran- shipment thence to the various Transatlantic countries (not German colonies), sent to Hamburg simply because in such cases that is a more advantageous route than direct from England. This trade, therefore, and it is the most valuable portion of the total trade, is entirely unconnected with, and independent of, German fiscal policy.—I am, Sir, &c..