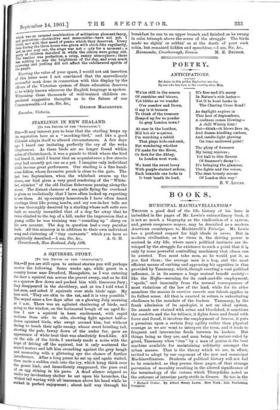 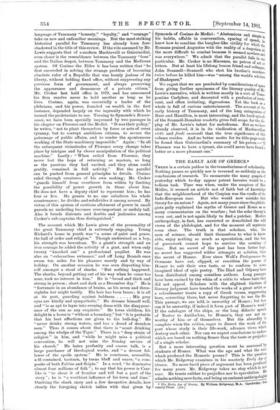 TROUGH a good deal of the life history of his hero is imbedded in the pages of Mr. Lewis's extraordinary book, it is not so mach a biography as the vindication of a system, and, parvis componere magna, may be described as a modern American counterpart to Machiavelli's Principe. Mr. Lewis has a profound respect for high ideals in vacuo. But in modern civilisation, as he views it, the driving power is centred in city life, where man's political instincts are de- veloped by the struggle for existence to such a point that it is only by some powerful controlling machinery that chaos can be averted. You must take men, so he would put it, as you find them ; the average man is a hog, and the most efficient means of curbing and appeasing his appetites is that provided by Tammany, which, though exerting a vast political influence, is in its essence a huge mutual benefit society— like the Maffia—securing for its rank-and-file employment, "spoils," and immunity from the normal consequences of most violations of the law of the land, while for its abler members the maxim /a carriere ouverte aux talents applies in its fullest sense. All that is exacted in return is unhesitating obedience to the mandate of the leaders. Tammany, by the frank admission of its apologist, is not an ideal system. Its annals are stained with crime and bloodshed, it sanctions the vendetta and the lex talionis, it fights force and fraud with force and fraud, it involves the employment of bravos, it puts a premium upon a certain foxy agility rather than physical courage as we are wont to interpret the term, and it leads to frequent and internecine feuds between its leaders. But things being as they are, and man being by nature ruled by greed, Tammany when " run " by a man of genius is the best machine available for maintaining solidarity amongst the urban masses. That is the theory which we are, in effect, invited to adopt by our exponent of the new and municipal Machiavellianism. Students of political history will not fail to be reminded, as they peruse these pages, of that strange perversion of morality resulting in the altered significance of the terminology of the virtues which Thucydides noted as the outcome of intestine party strife in Greece. So too in the • Richard Crater. By Alfred Henry Lewis. New York Life Publishing Company. language of Tammany "honesty," "loyalty," and " courage " take on new and unfamiliar meanings. But the most striking historical parallel for Tammany has already been fore- shadowed in the title of this review. If the role assumed by Mr. Lewis suggests that of a modern Machiavelli or Guicciardini, even closer is the resemblance between the Tammany "boss" and the Italian despot, between Tammany and the Medicean system. Of Cosimo. the Elder it has been written that "he first succeeded in solving the strange problem of becoming absolute ruler of a Republic that was keenly jealous of its liberty, without holding fixed office, without suppressing any previous form of government, and always preserving the appearance and demeanour of a private citizen." Mr. Croker last held office in 1879, and has announced his firm resolve never to hold another as long as he lives. Cosimo, again, was essentially a leader of the plebeians, and his power, founded on wealth in the first instance, depended largely on the ingenuity with which he turned the proletariate to use. Turning to Symonds's Renais- sance, we have been specially impressed by two passages in his chapter on Florence and the Medici. "It was their policy," he writes, "not to plant themselves by force or acts of overt tyranny, but to corrupt ambitious citizens, to secure the patronage of public affairs, and to render the spontaneous working of the State machinery impossible." Again "In all the subsequent vicissitudes of Florence every change takes place by intrigue and by clever manipulation of the political machine." Lastly; "When exiled from Florence, they never lost the hope of returning as masters, so long as the passions they had excited, and they alone could gratify, remained in full activity." But the parallel can be pushed from general principles to details. Cosimo ruled through creatures of his own making; Mr. Croker "guards himself from overthrow from within by limiting the possibility of power growth in those about him. He does not have a deputy chief to represent him ; he has four or five. He grants to no one subaltern his whole countenance; he divides and subdivides it among several. By virtue of this system of cautious allotment of power in small parcels no underling becomes over-important or unduly tall. Also it breeds distrusts and doubts and jealousies among Croker's sub-captains thus distinguished."

The account which Mr. Lewis gives of the personality of the great Tammany chief is extremely engaging. Young Richard's home in youth was "a scene of quiet and peace, the hall of order and religion." Though undersized as a boy, his strength was herculean. To a giant's strength and an iron courage he added the activity of a goat, and when only twenty "knocked out" a professional pugilist. He was also an "exhaustless swimmer," and off Long Branch once swam ten miles for his pleasure merely and by way of holiday. On another occasion he was seen disporting him- self amongst a shoal of sharks. "But nothing happened. The sharks, beyond getting out of his way when he came too near, took no interest in him." He is "broad and thick and strong in person ; short and dark as a December day." He is "fortunate in an abundance of brains, as his seven and three- eighths hat might testify. His hair has been brave ; it is all

at its post, guarding against baldness His grey eyes are kindly and sympathetic." He dresses himself well, and "is as apt to lapse into evening dress with the disappear- ance of the sun as any exquisite." He loves children, his delight in a horse is "without a boundary," but "it is probable that his best affections are given to the bull-dog." He "never drinks strong waters, and has a dread of drunken men." Thus it comes about that there is "scant. drinking among the whelps of the Tiger." There is a "deep strain of religion" in him, and "while he might miss a political convention, he will not miss the Sunday service of his church." He hates profanity and coarse talk, is a large purchaser of theological works, and "a devout fol- lower of the spoils system." He is courteous, accessible, 831f-contained, taciturn, by turns bluff and suave, "a com- posite of both Fabius and Scipio." In a word, "he dominates almost four millions of folk " ; to say that his power is Czar. likeis "to shear it of frontier and tell but a part of the story " ; he is "a worthiest influence of his town and time." Omitting the shark _story k.nd aJev decorative_ details, how closely the foregoing sketch tallies with that given by. Symonds of Cosimo de Medici "Abstemious and simple . his habits, affable in conversation, sparing of apeec, a° knew how to combine the burgher-like civility for which th, Romans praised Augustus with the reality of a deepetamau the more difficult to combat because it seemed nowhere and was everywhere." We admit that the parallel falls in oe. particular. Mr. Croker is no Maecenas, no patron of art or letters. But at least his lifelong bosom friend and colleague John Scannell—Sca,nnell who shot his brother's murdere; twice before he killed him—was "among the world's scholar; of Shakspere."

We regret that we are precluded by considerations of apace from giving further specimens of the literary quality of far. Lewis's narrative, which is written mostly in a sort of Tram. pontine Carlylese, and decorated with a profusion of link. vent, and often irritating, digressions. Yet the book as a whole is full of curious entertainment. The account of the early history of Tammany, and of the long antagoniam of Burr and Hamilton, is most interesting, and the lurid episode of the Scannell-Donahue vendetta gives full scope for the dis. play of Mr. Lewis's talent for melodrama. But as we bare already observed, it is in its vindication of Machiavellian virtit and frodi onorevoli that the true significance of this volume resides. And no better motto for its title-page could be found than Guicciardini's summary of his patron :—" If Florence was to have a tyrant, she could never have found a better or a more pleasant one."