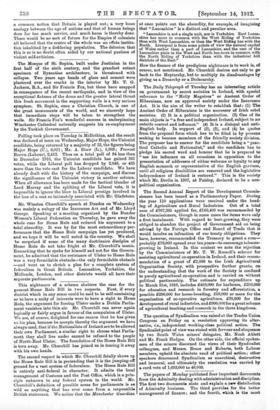 Mr. Winston Churchill's speech at Dundee on Wednesday was mainly

a eulogy of the Insurance Act and of Mr. Lloyd George. Speaking at a meeting organized by the Dundee Women's Liberal Federation on Thursday, he gave away the whole case for Home Rule and reduced his argument to a total absurdity. It was by far the most extraordinary per- formance that the Home Rule campaign has yet produced, and we hope it will be well noted in the country. We shall be surprised if some of the many doctrinaire disciples of Home Rule do not take fright at Mr. Churchill's mania. Remarking that he spoke for himself and not for the Govern- ment, he admitted that the resistance of Ulster to Home Rule was a very formidable obstacle—the only formidable obstacle —and went on to sketch a plan for a complete system of federalism in Great Britain. Lancashire, Yorkshire, the Midlands, London, and other districts would all have their separate parliaments.