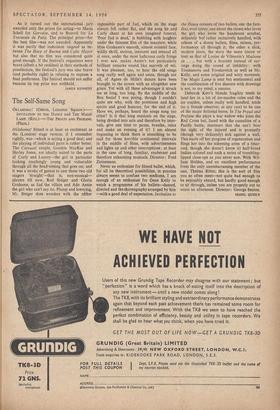 OKLAHOMA I (Odeon, Leicester Square.)— INVITATION TO THE DANCE and THE MAGIC LAMP. (Ritz.)—THE PROUD AND PROFANE.

(Plaza.) Oklahoma! filmed is at least as exuberant as the (London) stage version, if I remember rightly, was—which is saying a good deal; and the playing of individual parts is rather better. The Carousel couple, Gordon MacRae and Shirley Jones, are ideally suited to the parts Of Curly and Laurey—the girl in particular looking touchingly young and vulnerable through all the head-tossing that goes on; and it was a' stroke of genius to cast those two old stagers 'straight'—that is, non-musical— players till now,. Rod Steiger and Gloria Grahame, as Jud the villain and Ado Annie the girl who can't say no. Plump and lowering, Mr. Steiger does wonders with the rather impossible part of Jud, which on the stage always fell rather flat, and the song he and Curly chant at his own imagined funeral, 'Poor Jud is dead,' is bubbling with laughter under the thinnest film of the macabre; while Miss Grahame's smooth, almost oriental face, wildly shrill, serious, innocent and sensual all at once, under the most ludicrous curly fringe I ever saw, makes Annie's not particularly brilliant remarks sound like marvels of wit. It was pleasant, too, to hear the old songs sung really well again and some, though not all, of Agnes de Mille's dances have been brought to the screen with an altogether new grace. Yet with all these advantages it struck me as long, too long. By the middle of the Box Social I was pining, though I couldn't quite see why, with the prettiness and high spirits and good humour, for the end of it. Have we, perhaps, heard the songs sung too often? Is it that long musicals on the stage, being divided into acts and therefore by inter- vals, give one time to pause, breathe, relax and make an evening of it? I am almost beginning to think there is something to be said for those horrible continental intervals in the middle of films, with advertisements and lights up and other interruptions : at least in the case of long, familiar, exuberant and therefore exhausting musicals. Director: Fred Zinnemann.

Never an enthusiast for filmed ballet, which, for all its theoretical possibilities, in practice always seems to confuse two mediums, I am enough of an enthusiast for Gene Kelly to watch a programme of his ballets—danced, directed and the choreography arranged by him —with a good deal of expectation. Invitation to the Dance consists of two ballets, one the fam- iliar, even corny, one about the clown who loves the girl who loves the handsome acrobat, delicately but rather imitatively handled, with echoes of a dozen ballets, films, mimes, per- formances all through it; the other a slick, modern piede, the story the same (more or less) as that of Louise de Vilmorin's Madame de . . ., but with a bracelet instead of ear- rings doing the round of infidelity: with Toumanova and Youskevitch as well as Mr. Kelly, and some original and witty moments. The Magic Lamp is neat but sentimental and the combination of live dancers with drawings is not, to my mind, a success.

Deborah Kerr's blonde, fragility tends to land her in a lot of ice-maiden roles and the ice maiden, unless really well handled, tends (to a female observer, at any rate) to be one of the major fictional bores. In The Proud and Profane she plays a war widow who joins the Red Cross but, faced with the casualties of a Pacific battle, murmurs that she can't bear the sight of the injured and is promptly (though very delicately) sick against a wall. This starts off her progress of regeneration and flings her into the scheming arms of a (mar- ried, though she doesn't know it) half-breed Indian colonel and such a series of trembling- lipped close-ups as you never saw. With Wil- liam Holden, and an excellent performance from the only unembarrassing member of the cast, Thelma Ritter, this is the sort of film you so often meet—not quite bad enough to be enjoyably absurd, but hardly good enough to sit through, unless you are properly out to waste an afternoon. Director: George Seaton.