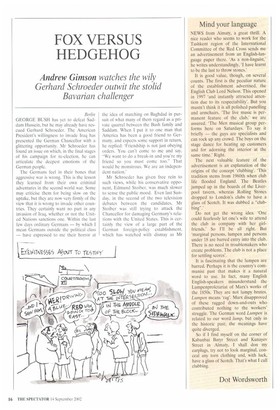 NEWS from Almaty, a great thrill. A nice reader who seems to work for the Tashkent region of the International Committee of the Red Cross sends me an advertisement from an English-language paper there. 'As a non-linguist,' he writes understandingly, 'I have learnt to be the last to throw stones.'

It is good value, though, on several counts. The first is the peculiar nature of the establishment advertised, the English Club Lord Nelson. This opened in 1997 'and instantly attracted attention due to its respectability'. But you mustn't think it is all polished panelling and armchairs. 'The live music is permanent feature of the club,' we are assured. 'The Men musical group performs here on Saturdays. To say it briefly — the guys are specialists and can rock up any crowd. The boys on the stage dance for heating up customers and for adorning the interior at the same time.' Right.

The next valuable feature of the advertisement is an explanation of the origins of the concept 'clubbing'. 'This tradition stems. from 1960th when club life flooded England. The Beatles jumped up in the boards of the Liverpool tavern, whereas Rolling Stones dropped to London's clubs to have a glass of Scotch, It was dubbed a "clubbing".'

Do not get the wrong idea. 'One could fearlessly let one's wife to attend the club in company with her girlfriends.' So I'll be all right. But 'marginal persons, lumpen and persons under 18 are barred entry into the club. There is no need in troublemakers who create problems. The club is not a place for settling scores'.

It is fascinating that the lumpen are barred. Perhaps it is the country's communist past that makes it a natural word to use. In fact, many English English-speakers misunderstand the Lumpenproletariat of Marx's works of the 1850s. They are not lumpy brutes. Lumpen means 'rag'. Marx disapproved of these ragged down-and-outs who contributed nothing to the workers' struggle. The German word Lumpen is related to our word lump, but only in the historic past; the meanings have quite diverged.

So if I find myself on the corner of Kabanbai Batyr Street and Kunayev Street in Almaty, I shall don my earplugs, try not to look marginal, conceal any torn clothing and, with luck, have a glass of Scotch. That's what I call clubbing.