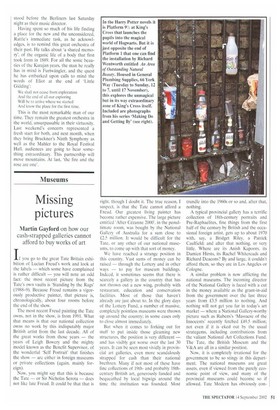 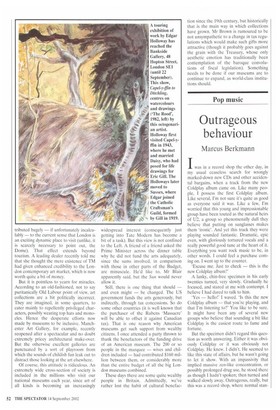 If you go to the great Tate Britain exhibition of Lucian Freud's work and look at the labels — which some have complained is rather difficult — you will note an odd fact: the most recent picture from the Tate's own vaults is 'Standing by the Rags' (1988-9). Because Freud remains a vigorously productive painter, that picture is, chronologically, about four rooms before the end of the show.

The most recent Freud painting the Tate owns, not in the show, is from 1991. What that means is that our national collection owns no work by this indisputably major British artist from the last decade. All of the great works from those years — the years of Leigh Bowery and the mighty model known as the Benefit Supervisor, of the wonderful 'Self Portrait' that finishes the show — are either in foreign museums or private collections (again, mainly foreign).

Now, you might say that this is because the Tate — or Sir Nicholas Serota — does not like late Freud. It could be that that is

right, though I doubt it. The true reason, I suspect, is that the Tate cannot afford a Freud. Our greatest living painter has become rather expensive. The large picture entitled `After Cezanne 2000', in the penultimate room, was bought by the National Gallery of Australia for a sum close to £2.5 million. It would be difficult for the Tate, or any other of our national museums, to come up with that sort of money.

We have reached a strange position in this country'. Vast sums of money can be raised — through the Lotteryand in other ways — to pay for museum buildings. Indeed, it sometimes seems that there is scarcely a gallery in the country that has not thrown out a new wing, probably with restaurant, education and conservation facilities. Most of those that haven't already are just about to. In the glory days of the Lottery Fund, a number of massive, completely pointless museums were thrown up around the country; in some cases only to close almost immediately.

But when it comes to forking out for stuff to put inside those gleaming new structures, the position is very different — and has visibly got worse over the last 30 years. It can be seen most vividly in provincial art galleries, even more scandalously strapped for cash than their national brethren. Many if not most of these have fine collections of 19thand probably 18thcentury British art, generously funded and bequeathed by local bigwigs around the time the institution was founded. Most

trundle into the 1960s or so and, after that, nothing.

A typical provincial gallery has a terrific collection of 18th-centuryportraits and Pre-Raphaelites, fine things from the first half of the century by British and the occasional foreign artist, gets up to about 1970 with, say, a Bridget Riley, a Patrick Caulfield; and after that nothing, or very little. Where are its Anish Kapoors, its Damien Hirsts, its Rachel Whitereads and Richard Deacons? By and large, it couldn't afford them, so they are in Los Angeles or Cologne.

A similar problem is now afflicting the national museums. The incoming director of the National Gallery is faced with a cut in the money available as the grant-in-aid from the government over the last three years from 13.5 million to nothing. And nothing will not get you far in today's art market — where a National Gallery-worthy picture such as Rubens's 'Massacre of the Innocents' recently fetched .€49.5 million; not even if it is eked out by the usual strategems, including contributions from the valiant National Art Collections Fund. The Tate, the British Museum and the V&A are all in a similar position.

Now, it is completely irrational for the government to be so stingy in this department. The national museums are great assets, even if viewed from the purely economic point of view, and many of the provincial museums could become so if allowed. Tate Modern has obviously con

tributed hugely — if unfortunately incalculably — to the current sense that London is an exciting dynamic place to visit (unlike, it is scarcely necessary to point out, the Dome). That effect extends beyond tourism. A leading dealer recently told me that she thought the mere existence of TM had given enhanced credibility to the London contemporary art market, which is now worth quite a bit of money.

But it is pointless to yearn for miracles. According to an old-fashioned, not to say puritanically Old Labour point of view, art collections are a bit politically incorrect. They are imagined, in some quarters, to cater mainly to repellently privileged characters, possibly wearing top hats and monocles. Hence the desperate efforts now made by museums to be inclusive. Manchester Art Gallery, for example, recently reopened after a spectacular and no doubt extremely pricey architectural make-over. But the otherwise excellent galleries are punctuated by a sort of playroom from which the sounds of childish fun leak out to distract those looking at the art elsewhere.

Of course, this attitude is ridiculous. An extremely wide cross-section of society is included in the millions who visit our national museums each year, since art of all kinds is becoming an increasingly

widespread interest (consequently just getting into Tate Modern has become a bit of a task). But this view is not confined to the Left. A friend of a friend asked the Prime Minister across the dinner table why he did not fund the arts adequately, since the sums involved, in comparison with those in other parts of the Budget, are minuscule. He'd like to, Mr Blair apparently said, but the Sun would never allow it.

Still, there is one thing that should — and even might — be changed. The US government funds the arts generously, but indirectly, through tax concessions. So do some other countries (it is well known that the purchaser of the Rubens 'Massacre' will be able to offset it against Canadian tax). That is one reason why American museums get such support from wealthy citizens. I once attended a party thrown to thank the benefactors of the funding drive of an American museum. The 200 or so people in the marquee — wives and children included — had contributed $160 million between them, or considerably more than the entire budget of all the big London museums combined.

These days there are some quite wealthy people in Britain. Admittedly, we've rather lost the habit of cultural benefac

tion since the 19th century, but historically that is the main way in which collections have grown. Mr Brown is rumoured to be not unsympathetic to a change in tax regulations which would make such gifts more attractive (though it probably goes against the grain with the Treasury, whose only aesthetic emotion has traditionally been contemplation of the baroque convolutions of fiscal legislation). Something needs to be done if our museums are to continue to expand, as world-class institutions should.