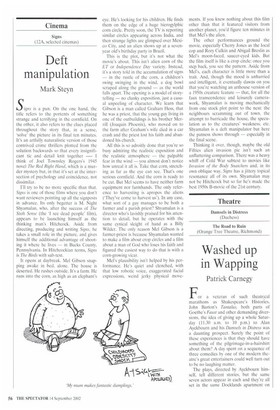 Signs is a pun. On the one hand, the title refers to the portents of something strange and terrifying in the cornfield. On the other, it also refers to the clues placed throughout the story that, in a sense, 'solve' the picture in its final ten minutes. It's an artfully naturalistic version of those contrived crime thrillers plotted from the solution backwards so that every insignificant tic and detail knit together — I think of Joel Townsley Rogers's 1945 novel The Red Right Hand, which is a murder mystery but, in that it's set at the intersection of psychology and coincidence, not dissimilar.

I'll try to be no more specific than that. Signs is one of those films where you don't want reviewers pointing up all the signposts in advance. Its only begetter is M. Night Shyamalan, who, after the success of The Sixth Sense (the 'I see dead people' film), appears to be launching himself as the thinking man's Hitchcock. Aside from directing, producing and writing Signs, he takes a small role in the picture, and gives himself the additional advantage of shooting it where he lives — in Bucks County, Pennsylvania. In Hitchcockian terms, Signs is The Birds with sub-text.

It opens at daybreak. Mel Gibson snapping awake in bed, alone. The house is deserted. He rushes outside. It's a farm. He runs into the corn, as high as an elephant's eye. He's looking for his children. He finds them on the edge of a huge hierogylphic corn circle. Pretty soon, the TV is reporting similar circles appearing across India, and then strange lights are glimpsed over Mexico City, and an alien shows up at a sevenyear old's birthday party in Brazil.

This is the plot, but it's not what the movie's about. This isn't alien corn of the ET or Independence Day variety. Instead, it's a story told in the accumulation of signs — in the rustle of the corn, a children's swing swinging in the wind, a dog bowl scraped along the ground — as the world falls apart. The opening is a model of storytelling — no clunky exposition, just a casual unpeeling of character. We learn that Gibson is a man called Graham Hess, that he was a priest, that the young guy living in one of the outbuildings is his brother Merrill (Joaquin Phoenix), who moved on to the farm after Graham's wife died in a car crash and the priest lost his faith and abandoned his church.

All this is so adroitly done that you're so busy admiring the realistic exposition and the realistic atmosphere — the palpable fear in the wind — you almost don't notice how unreal it all is. Take that corn, stretching as far as the eye can see. That's one serious cornfield. And the corn is ready to be cut. But Mel seems to have neither farm equipment nor farmhands. The only reference to harvesting is apropos the aliens (`They've come to harvest us'). In any case, what sort of a guy manages to be both a farmer and a parish priest? Shyamalan is a director who's lavishly praised for his attention to detail, but he operates with the same cynical sleight of hand as a Billy Wilder. The only reason Mel Gibson is a farmer-priest is because Shyamalan wanted to make a film about crop circles and a film about a man of God who loses his faith and figured the easiest way to do that is with a corn-growing vicar.

Mel's plausibility isn't helped by his performance. He's quiet and clenched, with that low robotic voice, exaggerated facial expressions, weird jerky physical move merits. If you knew nothing about this film other than that it featured visitors from another planet, you'd figure ten minutes in that Mel's the alien.

The other performances ground the movie, especially Cherry Jones as the local cop and Rory Culkin and Abigail Breslin as Mel's moon-faced, saucer-eyed kids. But the film itself is like a crop circle: once you step back, you see the pattern. Aside from Mel's, each character is little more than a trait. And, though the mood is unhurried and intelligent, it eventually dawns on you that you're watching an arthouse version of a 1950s creature feature — that, for all the faux transcendence and leisurely camerawork, Shyamalan is moving mechanically from one stock plot point to the next: the neighbours scramming out of town, the attempt to barricade the house, the speculation as to the creatures' weakness. etc. Shyamalan is a deft manipulator but here the patness shows through — especially in the final scene.

Thinking it over, though, maybe the old Fifties alien invasion pie isn't such an unflattering comparison. There was a heavy whiff of Cold War subtext to movies like Invasion of the Body Snatchers and, in its own oblique way, Signs has a jittery topical resonance all of its own. Shyamalan may not be Hitchcock hut so far he's made the best 1950s B-movie of the 21st century.