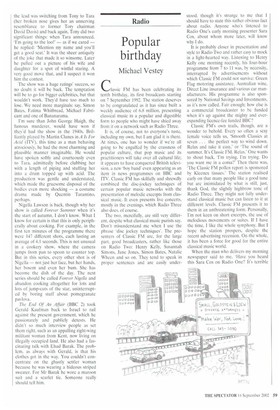 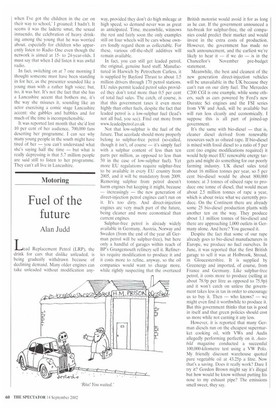 Classic FM has been celebrating its tenth birthday, its first broadcasts starting on 7 September 1992. The station deserves to be congratulated as it has since built a weekly audience of 6.8 million, presenting classical music in a popular and digestible form to people who might have shied away from it on a network such as Radio Three.

It is, of course, not to everyone's taste, including my own, but I am glad it is there. At times, one has to wonder if we're all going to be engulfed by the crassness of popular culture, that pop music and its practitioners will take over all cultural life; it appears to have conquered British television, a new 'boy band' even appearing as an item in news programmes on BBC and ITV. Classic FM has skilfully and shrewdly combined the disc-jockey techniques of certain popular music networks with the presentation of melodic excerpts from classical music. It even presents live concerts, mostly in the evenings, which Radio Three also does, of course.

The two, mercifully, are still very different, despite what classical music purists say. Don't misunderstand me when I use the phrase 'disc jockey techniques'. The presenters of Classic FM are, for the large part, good broadcasters, rather like those on Radio Two: Henry Kelly, Susannah Simons, Jane Jones, Simon Bates, Natalie Wheen and so on. They tend to speak in proper sentences and are easily under

stood, though it's strange to me that I should have to state this rather obvious fact about radio. Anyone who's listened to Radio One's early morning presenter Sara Cox, about whom more later, will know why I do.

It is probably closer in presentation and style to Radio Two and rather easy to mock in a light-hearted way. Listening to Henry Kelly one morning recently, his four-hour programme from 7 to 11 was, by necessity, interrupted by advertisements without which Classic FM could not survive: Green Flag motoring assistance, Australian wine, Direct Line insurance and various car manufacturers. His programme is also sponsored by National Savings and Investments, as it's now called. Fair enough; how else is a commercial broadcaster to be funded when it's up against the mighty and everexpanding licence-fee funded BBC?

Classic FM's own trails, though, are a wonder to behold. Every so often a sexy female voice tells us, 'Smooth Classics at seven .. . the perfect way to wind down. Relax and take it easy,' or 'The sound of summer. It's Classic FM. Relax.' One wants to shout back, 'I'm trying. I'm trying. Do You want me in a coma?' Then there was, 'The Classic FM pollen report is sponsored by Kleenex tissues.' The station realised early on that many people like a good tune but are intimidated by what is still, just, thank God, the slightly highbrow tone of Radio Three. They might not fully understand classical music but can listen to it at different levels. Classic FM presents it to them in an unthreatening form. Personally, I'm not keen on short excerpts, the use of melodious movements or suites. If I have the time, I like the whole symphony. But I hope the station prospers, despite the recent advertising recession. On the whole, it has been a force for good for the entire classical music world.

When the man who delivers my morning newspaper said to me, 'Have you heard this Sara Cox on Radio One? It's terrible when I've got the children in the car on their way to school,' I groaned; I hadn't. It seems it was the ladette smut, the sexual innuendo, the celebration of heavy drinking among the young that he was worried about, especially for children who apparently listen to Radio One even though the network is aimed at 15to 24-year-olds. I must say that when I did listen it was awful radio.

In fact, switching on at 7 one morning I thought someone must have been standing in for her, as the presenter sounded like a young man with a rather high voice; hut, no, it was her. It's not the fact that she has a Lancashire accent that bothers me, it's the way she misuses it, sounding like an actor exercising a comic stage Lancashire accent; she gabbles and babbles and for much of the time is incomprehensible.

It was reported last month that she'd lost 10 per cent of her audience, 700,000 fans deserting her programme. I can see why many young people in the south might have tired of her — you can't understand what she's saying half the time — but what is really depressing is that 5.7 million people are said still to listen to her programme. The.■, can't all live in Lancashire.