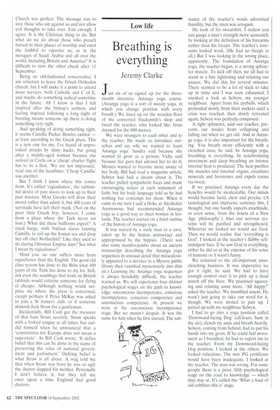 Jeremy Clarke Just six of us signed up for the threemonth intensive Astanga yoga course. (Astanga yoga is a sort of sweaty yoga, in which you change position with every breath.) We lined up on the wooden floor of the converted blacksmith's shop and faced the teacher, who looked like Jesus dressed for the 800 metres.

We were strangers to each other and to the teacher. He made us introduce ourselves and say why we wanted to learn Astanga yoga. Sandra said because she wanted to grow as a person; Vicky said because her guru had advised her to do it: Monica wanted to become more aware of her body; Bill had read a magazine article; Selwyn had had a dream about it. The teacher pulled sympathetic faces and made encouraging noises at each statement of faith, but his body language told us he had nothing but contempt for them. When it came to my turn I said a bloke at Alcoholics Anonymous had recommended Astanga yoga as a good way to meet women in leotards. The teacher started on a brief outline of the history of Astanga yoga.

It was started by a nude man in a cave, taken up by the Indian aristocracy and appropriated by the hippies. (There was also some mumbo-jumbo about an ancient manuscript describing the Astanga yoga sequences in unusual detail that miraculously appeared to a devotee in a Mysore public library then vanished mysteriously into thin air.) Learning the Astanga yoga sequences is always fiendishly difficult, the teacher warned us. We will experience four distinct psychological stages on the path to knowledge: unconscious incompetence, conscious incompetence, conscious competence and unconscious competence. At present we were at the unconscious incompetence stage. But we mustn't despair. It was the same for him when he first started. The sub

stance of the teacher's words advertised humility, but the mien was arrogant.

He took of his sweatshirt. I reckon you can gauge a man's strength more accurately by looking at the definition of his forearms rather than his biceps. The teacher's forearms looked weak. (He had no biceps at all.) But I was looking in the wrong place, apparently. The foundation of Astanga yoga, the teacher began, is a strong sphincter muscle. To kick off then, we all had to stand in a line tightening and relaxing our anuses. We did this for several minutes. There seemed to be a lot of slack to take up in mine and I was soon exhausted. I sneaked a look at Selwyn, my younger neighbour. Apart from his eyeballs, which protruded slowly from their sockets until a crisis was reached, then slowly retreated again, Selwyn was perfectly composed.

A tight sphincter, said our teacher, prevents our insides from collapsing and falling out when we get old. And in Astanga yoga, it is also important for the breathing. You breath more efficiently with a clenched anus, he said. In Astanga yoga, breathing is everything. In synchronising movement and deep breathing an intense internal heat is produced. The heat purifies the muscles and internal organs, circulates minerals and hormones and expels toxins via sweat.

If we practised Astanga every day the benefits would be incalculable. Our minds would become lucid, clear and precise. (A tautological and imprecise sentence this, I thought, but one hardly expects exactitude, or even sense, from the tenets of a New Age 'philosophy') Also our nervous systems will be purified and strengthened. Wherever we looked we would see God. Then we would realise that 'everything is God'. I looked at the teacher's flabby selfindulgent face. If he saw God in everything, either he did so at the expense of his sense of humour or it wasn't funny.

We returned to the all-important anusclenching business. It was imperative we got it right, he said. We had to have enough control over it to pick up a dead match off the floor. We practised squeezing and relaxing some more. 'All happy?' asked the teacher. We mumbled assent. He wasn't just going to take our word for it, though. We were invited to pair up. I paired up with my neighbour Selwyn.

I had to go into a yoga position called 'Downward-facing Dog' (all-fours, bum in the air), clench my anus and breath heavily. Selwyn, coming from behind, had to put his hands into my groin. If he could feel movement as I breathed, he had to report me to the teacher. From my Downward-facing Dog position, I looked at the others. We looked ridiculous. The new PG certificate would have been inadequate. I looked at the teacher. The man was wrong. For some people there is a prior, fifth psychological stage on the road to knowledge — which they stay at. It's called the 'What a load of old cobblers this is' stage.