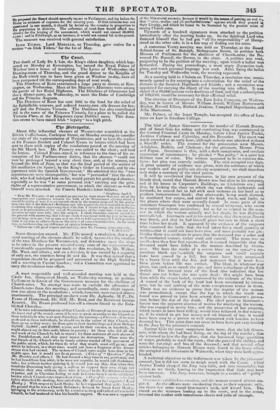 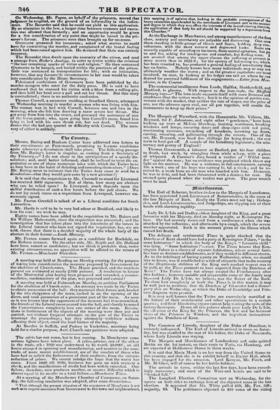 The trial of James Greenacre for the murder of Hannah

Brown, and of Sarah Gale for aiding and comforting him, was commenced in the Central Criminal Court on Monday, before Chief Justice Tindal, Justices Coltman and Coleridge, and the Recorder. The court was much crowded at an early hour, although nobody was admitted without a Sheriffs' order. The counsel for the prosecution were Messrs. Adolphus, Bodkin, and Clarkson ; for the prisoners, Messrs. Price and Payne. Greenacre is thin, with a dark complexion, and resolute expression of countenance : he pleaded " Not guilty," in a quiet but distinct tone of voice. The woman appeared to be in extreme dis-

tress : her plea was scarcely audible. The trial occupied two days. A great quantity of evidence was given, with the substance of which our readers and the public are already acquainted ; we shall therefore only make a summary of the chief points.

It will be recollected that Greenacre, in his own account of the bloody deed, stated that Hannah Brown was last alive in his company. and at his house in Carpenter's Buildings, on Christmas eve ; and that, by kicking the chair on which she was tilting backwards and forwards, he caused her to fall with such violence on her head us to produce instantaneous death : that afterwards, being much alarmed, he mutilated her corpse, and carried the head, trunk, and limbs, to the places where they were severally found. In some parts of this statement Greenacre was confirmed by several witnesses, who swore to a variety of minute particulars; but as far as related to the man- nor in which the woman actually met her death, be was distinctly contradicted. Greenacre said in his confession, that the woman Brown was drunk, and that he had himself given her ruin to drink a short time before her death. It appeared by the evidence of the surgeons who examined the body, that she had taken but a small quantity of spirits—that it could not have been rum, and must probably was gin : besides there was evidence to prove that the deceased was a sober and well-conducted woman, rather staid and careful. The room was so small—less than four feet square—that it seemed impossible that the deceased could have fallen in the mintier described by Green- acre. She bore the marks of a severe blow on the eye—" a tre- mendous black eye "—which the surgeons said could scarcely have been caused by a fall, but must have been occasioned by a heavy blow with the fist, and moreover that it must have been given before life was extinct. The blow, in whatever way given, was such as to smash the eye, and force a discharge of the fluid matter. The internal state of the head also indicated that her throat was cut before she was quite dead : this might have been done while the stupor lasted, occasioned by the violence of the blow. A wound at the back of the head had been mentioned by Green. acre, but he said nothing of the more conspicuous bruise in front. There Wil9 no evidence to prove that the murder of the woman was premeditated, except that the bag in which the trunk was found was proved to have been several days in Greenacre's posses- slum, before the day of the death. The chief point in Greenuere's favour was the apparent absence of motive for murdering the woman. She was engaged to marry him ; and the possession of her property, which seems to have been trifling, would have followed in due course ; or, if he wished to get her money and mid himself of her, it would have been easy to a person so well acquainted with London to have deserted her. This point does not seem to have been put %cry forcibly to the Jury by the prisoner's counsel.

Against Gale the most suspicious facts were, that she left Green- acre, with whom she had been living, on the day of the murder ; that she returned to him the day after ; that she borrowed large quantities of water, probably to wash the room, that she pawned the clothes, and wore the ear-rings and boa of the deceased ; and that several other articles belonging to Hannah Brown were found in the house w hick she occupied with Greenacre in Walworth, when they were both appre- hended.

A technical objection to the indictment was taken by the prisonere' counsel ; but it did not seem to weigh much with the Court. Chief Justice Tindal charged the Jury very fully, and very impartially, but rather, as we think, leaning to the impression that Gale may bare been i llll ocent. The Jury, however, brought in a verdict of guilty" ogninst both.

C11106011, and the woman seemed almost stu- pilicd. As the officers were conducting them to their separate cells, she threw her arms round Greenacre's neck, and kissed him. The crowd or: the staircase leading up to the corm, and in the street, , received the verdict with tumultuous cheers and yells of triumph.

On Wednesday, Mr. Payne, on behalf of the prisoners, moved that judgment be respite& on the ground of an informality in the indict- ment. The Recorder said that he could not yield to this application. By an alteration in the law, a longer time between sentence and execu- tion was allowed than formerly ; and an opportunity would be given for a due consideration of any point that might be raised in the pri- soner's favour. The prisoners were then brought up for sentence.

Greenacre protested his innocence ; asked what motive he could have for committing the murder,.and complained of the brutal feeling which had been raised against him. He declared that Gale was entirely innocent.

The Recorder then dwelt upon the enormity of the crime, and read a passage from Butler's Analogy, in order to revive within the criminal "the last remaining sparks ot virtue and religion." He then sentenced Greenacre to be hanged, and buried within the precincts of the prison. Gale was sentenced to transportation for life; with an intimation, however, that any favouraqe circumstances in her case would be taken into consideration by the Home Secretary. Fabricated confessions of Greenacre have been published by the murder-mongers who cater for the daily press. He is said to have confessed that he stunned his victim with a blow from a rolling-pin, and then held her head over a pail and cut her throat. But this story is contradicted ; there is no authentic confession.

Thomas Cornell, a carpenter residing at Stratford Green, attempted on 'Wednesday morning to murder a woman who was living with him. The woman was in bed with Cornell, between one and two in the morning, when she felt him drawing a razor across her throat. She got away from him into the street, and procured the assistance of one of the horse-patrol; who, upon going into Cornell's room, found him lying in bed with his own throat cut, but not dead. The woman denies that she had any quarrel or difficulty with Cornell: The reco- very of either is, unlikely.