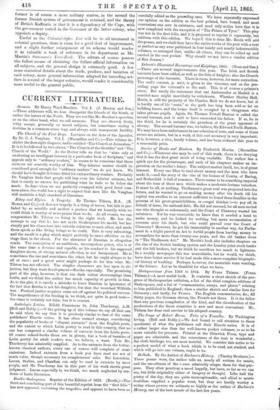 Booth's Shakespeare. Reprint of the Edition of 1623. (Booth.)—The third

and concluding part of this beautiful reprint from the " first folio " has now appeared, containing the tragedies, and appears to have-been as carefully edited as the preceding ones. We have repeatedly expressed our opinion on the edition as the best printed, best bound, and most convenient one now in existence, and need only notice here that it is now completed with the exception of "The Prince of Tyre." This play was not in the first folio, and it is proposed to reprint it separately, but uniform with this edition. We hope if this is done Mr. Booth will add the poems, and we shall then have the entire works of the poet with a text as perfect as any ever published in four handy and nearly indestructible volumes, so arranged that, unlike all others, they can be rolled up and carried in the coat pocket. Why should we not have a similar edition of Ben Jenson ?