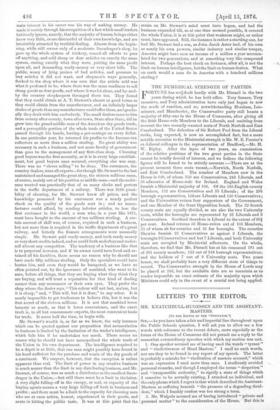 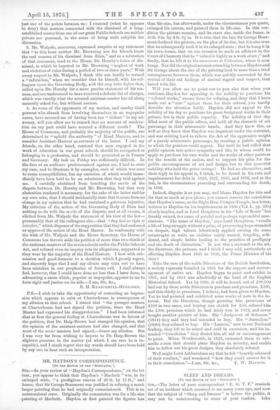 MR. KNATCHBITLL-HUGESSEN AND THE ASSISTANT- MASTERS.

SIR,—As you have taken a fair and impartial line throughout upon the Public Schools question, I will ask you to allow me a few words with reference to the recent debate, more especially as the forms of the House of Commons did not permit me a reply to the somewhat extraordinary speeches with which my motion was met.

1. One speaker accused me of having used the words " tyrant " and " vindictiveness of Head Masters." I used no such words, nor are they to be found in any report of my speech. The latter is probably a mistake for " vindication of masters accused," which was an expression I used more than once. I studiously avoided personal remarks, and though I employed the terms " despotism" and "irresponsible authority," to signify a state of things which I conceive to be actually existing, I attacked no individual, and the only phrase which I regret is that which described the Assistant- Masters as suffering beneath "the pressure of a degrading thral- dom," which I frankly confess was too strong a term.

2. Mr. Walpole accused me of having introduced " private and personal matter" to the consideration of the House. But this is just one of the points between us ; I contend (what he appears to deny) that matters connected with the dismissal of a long- established master from one of our great Public Schools are neither private nor personal, in the sense of being unfit subjects for discussion.

3. Mr. Walpole, moreover, expressed surprise at my statement that " to this hour neither Mr. Browning nor his friends know the real reasons of his_ dismissal from Eton," and as a refutation of that statement, read to the House Dr. Hornby's letter of dis- missal, in which he imputed to Mr. Browning " neglect of work and violation of rules during a period of two or three years." With every respect to Mr. Walpole, I think this can hardly be termed a "refutation," when we consider that he himself, with his col- leagues upon the Governing Body, with this very letter before them, .called upon Dr. Hornby for a more precise statement of his rea- sons, and are understood to have received a definite list of charges, 'which was exactly what the accused assistant-master has all along earnestly asked for, but without success.

4. As some of the opponents of my motion, and sundry timid ,persons who shrank from involving themselves in an unpopular cause, have accused me of having been too " violent " in my ad- wocacy, will you allow me to remark that no amount of modera- tion on my part could have secured a different result ? The House of Commons, and probably the majority of the public, are determined to " uphold the authority " of Head Masters, and to consider Assistant-Masters as servants of the latter. I and my _friends, on the other hand, contend that men engaged in the work of education in our great schools should be recognised as belonging to a profession, and should be protected as in France and Germany. My task on Friday was sufficiently difficult. In -the face of an audience predetermined against me, I had to state my case, and to illustrate it by examples, each of which was sure to rouse susceptibilities, but my omission of which would imme- diately have been held to be an admission that they told against . me. I carefully abstained from touching the merits of the dispute between Dr. Hornby and Mr. Browning, but that very abstention rendered it necessary, for the sake of the latter and for my own sake, that I should incidentally state that it arose from no -change in my opinion that he had sustained a grievous injustice. My criticism of the action of the Governing Body of Eton had nothing to do with the merits of the dispute; and at all events, it elicited from Mr. Walpole the statement of his view of the law— _presumably that of his colleagues also—that "they had no right to interfere," which disposes of the supposition that they had endorsed -or approved the action of the Head Master. In conformity with the wish of Mr. Walpole and the Home Secretary, the House of Commons has thrown aside the petition of more than two-thirds of the assistant-masters of the seven schools under the Public Schools Act, and refused even an inquiry into its allegations, supported as they were by the majority of the Head Masters. I bow with sub- mission and good-humour to a decision which I greatly regret, and sincerely hope that I and my clients may turn out to have been mistaken in our prophecies of future evil. I shall always feel, however, that I could have done no less than I have done, in advocating a cause which, popular or unpopular, appears to me to have right and justice on its side.—I am, Sir, &c.,

P.S.—I wish to take the opportunity of correcting an impres- sion which appears to exist at Charterhouse in consequence of my allusion to that school. I stated that " the younger masters at Charterhouse had not signed the petition, since the Head Master had expressed his disapprobation." I had been informed that at first the general feeling at Charterhouse was in favour of the petition, that Dr. Haig-Brown had changed his opinion, that -the opinion of the assistant-masters had also changed, and that moat of the senior masters had signed,—hence my allusion. But I was very far from wishing to impute to Dr. Haig-Brown the slightest pressure in the matter (of which I am sure he is in- capable), and I niuch regret that my words should have been held by any one to bear such an interpretation.