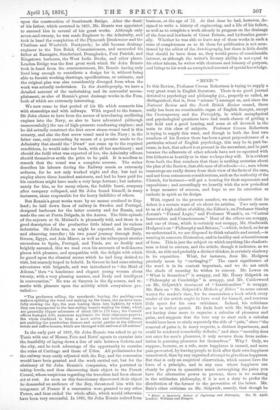 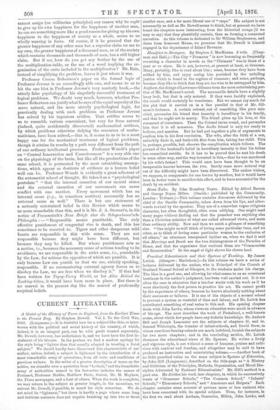 IN this Review, Professor Croom Robertson is trying to supply a very great want in English literature. There is no good journal devoted to psychology and philosophy (i.e., properly so called, as distinguished, that is, from "science ") amongst us, and since the National Review and the North British Review ceased, there really has been no considerable organ of English thought, except the Contemporary and the Fortnightly, in which metaphysical and psychological questions have had much chance of getting a fair field and a good hearing, and none at all devoted in- the main to this class of subjects. Professor Croom Robertson is trying to supply this want, and though in both the first two numbers of his Review there has been a great preponderance of a particular school of English psychology, this may be in part be- cause, in fact, that school is at present in the ascendant, and in part because the adherents of other schools have not co-operated with him hitherto as heartily as in time we hope they will. It is evident from both the first numbers that there is nothing sectarian about the plan of the Review, that able men of all schools—i.e., men whose reasonings are really drawn from their view of the facts of the case, and not from extraneous considerations, such as the authority of the Church, for instance—will get a hearing for their arguments and expositions ; and accordingly we heartily wish the new periodical a large measure of success, and hope to see its execution as catholic in spirit as its design.

With regard to the present number, we may observe that its defect is a certain want of via about its articles. Two only seem to us of a high calibre of ability, the Editor's, on Professor Stanley Jevons's "Formal Logic," and Professor Wundt's, on "Central Innervation and Consciousness." Most of the others are scrappy, and one of them, which is certainly not scrappy, Mr. Shadworth Hodgson's on " Philosophy and Science,"—which, indeed, so far as we understand it, we are disposed to think valuable and sound,—is wanting in concrete illustration, and in lucidity and exhaustiveness of form. This is just the subject on which anything like shadowi- ness is fatal to success, and the article, though it indicates, as we think, an able and probably a distinct thinker, is certainly shadowy in its exposition. What, for instance, does Mr. Hodgson precisely mean by "envisaging?" The exact significance of the word is in its context important, and we do not catch the shade of meaning he wishes to convey. Mr. Lewes on "What is Sensation?" is scrappy, and Mr. Henry Sidgwick on "Philosophy at Cambridge" is scrappy, and Mr. Calderwood on Mr. Sidgwick's treatment of " Intuitionalism " is scrappy. Mr. Bain on " Mr. Sidgwick's Methods of Ethics" to some extent wastes the reader's time, for he summarises a book which every reader of the article ought to have read for himself, and reserves little space for his own criticisms. Indeed, his criticisms are to us rather quaint. He finds fault with Mr. Sidgwick for not having done more to organise a calculus of pleasures and pains, and suggests that the true way to start such a calculus would have been to study separately the side of "pain," since "the removal of pains is, in many respects, a distinct department, and

could be rendered remarkably definite," and since "morality does not cater for men's pleasures, it only secures them from moles- tation in pursuing pleasures for themselves." Why ? Only, we suppose, because, as a rule, more happiness is caused, and more pain prevented, by leaving people to look after their own happiness unmolested, than by any organised attempt to give them happiness. But that is only an empirical observation, which cannot have the force of a principle, and in any case where happiness can clearly be given in quantities much outweighing the pains you have the alternative power to prevent, there is no meaning in the utilitarian philosophy, if it is not a duty to prefer the distribution of the former to the prevention of the latter. Mr. Bain's other criticism on Mr. Sidgwick, namely, that though he

* Mind: a Quarterly Review of Psychology and Philosophy. No. IL April. cannot assign (on utilitarian principles) any reason why he ought to give up his own happiness for the happiness of another man, he can see something more like a good reason for giving up his own happiness to the happiness of society as a whole, seems to us wholly wanting in force. Of course, if it be granted that the greater happiness of any other man has a superior claim on me to my own, the greater happiness of a thousand men, or of the society which contains thousands and thousands of men, has a still higher claim. But if not, how do you get any farther by the use of the multiplication-table, or the use of a word implying the or- ganisation of the units included in the multiplication? Mr. Bain, instead of simplifying the problem, leaves it just where it was.

Professor Croom Robertson's paper on the formal logic of Professor Jevons is an exceedingly able one, and seems to us to hit the one blot in Professor Jevons's very masterly book,—the utterly false psychology of his singularly successful treatment of logical problems. We doubt very much, however, whether Pro- fessor Robertson can justify what he says of the equal capacity of the more natural, and the more strictly psychological logic, for practically dealing with such problems as Professor Jevons has solved by his ingenious artifice. That artifice seems to us to resemble various convenient, but very far from natural (indeed, quite accidentally discovered) mathematical artifices, by which problems otherwise defying the resources of mathe- maticians, have been solved,—that is, it seems to us to be a most happy one for the mechanical treatment of logical problems, though it attains its results by a path very different from the path of our ordinary intellectual processes. Professor Wundt's paper on "Central Innervation and Consciousness" is a very able one on the physiology of the brain, but like all the productions of the same school, it is permeated by the most astonishing assump- tions, which appear as destitute of evidence as a human belief well can be. Professor Wundt is evidently a great adherent of the automatist school of thought. He takes it as a "psychological postulate " " that the internal causation of our mental states and the external causation of our movements can never conflict with one another. Every movement which has an internal cause (e.g., in conscious motives) necessarily has an external cause as well." There is but one statement of a seriously entertained belief in this Review which seems to us more remarkable than this, and it is Mr. J. A. Stewart's, in his notice of Frauenstadt's Neue Briefe der die Schopenhauer'sche Philosophic : — "Responsible means punishable. The only effective punishment of congenital vice is death, and this has sometimes to be resorted to. Tigers and other dangerous wild beasts are responsible in this wide sense. They are not responsible because they might have been different, but because they may be killed. But where punishment acts as a motive, i.e., becomes the necessary cause of actions tending to its avoidance, we are responsible in the strict sense, i.e., punishable by the Law, for actions the opposites of which are possible. It is only because Law can punish us that we are, strictly speaking, responsible. If no overmastering external agency forces us to disobey the Law, we are free when we disobey it." If that had been written for Topsy-Turvy World, or for Alice Behind the Looking - Glass, it would have been more in place. But there is no marvel in the present day like the marvel of profoundly sceptical beliefs.