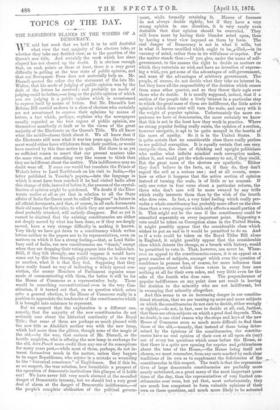 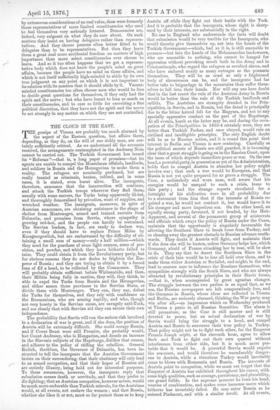 THE DANGEROUS BLANKS IN THE WISHES OF A DEMOCRACY.

WE said last week that we held it to be still doubtful what view the vast majority of the electors take, or whether-they take any decided view, as to the question of the Queen's new title. And certainly the week which has since elapsed has not cleared up the doubt. It is obvious enough that, on such points as these at least, there is a very great difficulty in getting at the true state of public opinion, and that our Newspaper Press does not materially help us. Mr. Disraeli quoted the other day the statement of the late Mr. Walter, that his mode of judging of public opinion was by the drift of the letters he received ; and probably no mode of judging could be better,—so long as the public opinion of which you are judging is a public opinion which is accustomed to express itself by means of letters. But Mr. Disraeli's last Reform Bill carried us down to a class of electors who certainly are not accustomed to express their opinions by means of letters, a fact which, perhaps, explains why the newspapers usually regarded as the best organs of public opinion, are themselves manifestly at fault as to the views of the great majority of the Electorate on the Queen's Title. We all know what the middle-classes think about it. We all know that if the Electorate still were what it was ten years ago, the Govern- ment would either have withdrawn from their position, or would have received by this time notice to quit. But there is as yet no sufficient reason to assert that our present masters take the same view, and something very like reason to think that they are indifferent about the matter. This indifference may no doubt wear off. If some one would but translate the Prince of Wales's letter to Lord Northbrook on his visit to India,—the letter published in Tuesday's papers,—into the language in which it must have been couched if he had visited India after this change of title, instead of before it, the process of the crystal- lisation of opinion might be quickened. We doubt if the Elec- torate realise at all as yet that in relation to all the State affairs of India the Queen must be called "Empress" in future in all official documents, and that, of course, in all such documents their old name for their ruler, to which they are accustomed, in- deed probably attached, will entirely disappear. But as yet it cannot be doubted that the existing constituencies are either not deeply moved by what has been done, or if they are deeply moved, have a very strange difficulty in making it known. Very likely we have got down to a constituency which writes letters neither to the papers nor to its representatives, even on matters on which it has a strong feeling,—that, as Lord Salis- bury said of India, our new constituencies are "dumb," except when they are dropping their voting-papers into the ballot-box. Still, if they felt strongly, one would suppose it would haVe come out by this time through public meetings, or in one way or another, what it is that they feel. Supposing that they have really found no way of indicating a widely spread con- viction, the sooner Members of Parliament organise some mode of communicating with them, the better it will be for the House of Commons as a representative body. There would be something unconstitutional even in the very Con- stitution, if it turned out that, on no question which arises after a general election, is the House of Commons really in a position to appreciate the tendencies of the constituencies which it is brought into existence to represent.