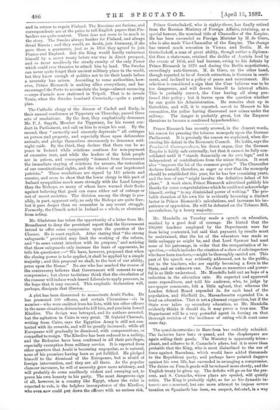 The Catholic clergy of the diocese of Cashel and Emly,

in their annual conference at Tipperary on Thursday, passed three sets of resolutions. By the first, they emphatically denounce Mr. P. J. Smyth, Member for Tipperary, for his recent con- duct in Parliament, and call on him to resign his seat. By the second, they "earnestly and sincerely deprecate" all outrages on person and property, and especially those upon defenceless animals, and pledge themselves strenuously to denounce mid- night raids. By the third, they declare that there can be no peace in Ireland while evictions continue for non-payment of excessive rent, and while the leaders of the Irish people are in prison, and consequently "demand from Government the immediate staying of evictions for arrears, the restoration of our constitutional rights, and the release of our imprisoned patriots." These resolutions are signed by 115 priests and curates, and seem to show that the lower clergy in this part of Ireland sympathise much more strongly with the Land League than the Bishops, so many of whom have warned their flocks against believing that good can come either out of outrage or out of secret societies. The division among the clergy is pos- sibly, in part, apparent only, as only the Bishops are quite free ; but it goes deeper than we remember in any recent struggle. Formerly, the Church acted in Ireland as a whole, or abstained from acting.