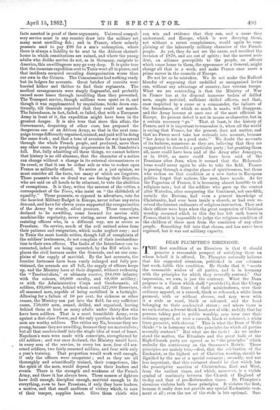 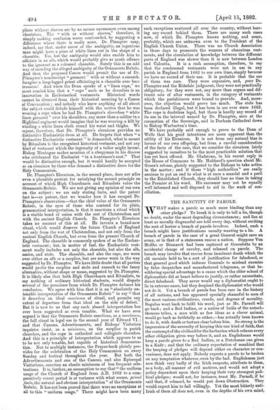 TIIE first condition of an Eirenicon is that it should promise a reasonable prospect of satisfying those on whose behalf it is offered. Dr. Plumptre naturally believes that his suggested eirenicon, published in our columns last week, fulfils this condition. He thinks that it "meets the reasonable wishes of all parties, and is in harmony with the principles for which they severally contend." Our impression, we own, is just the contrary. What the Dean proposes is a Canon which shall "provide (1), that the Clergy shall wear, at all times of their ministrations, over their ordinary apparel, or a cassock, black or coloured, a white linen garment, with or without sleeves, and May wear with it a stole or scarf, black or coloured, and the hood belonging to their academical status ; and where there is no such status, a decent black hood,not of silk ; and (2), that lay persons, taking part in public worship, may wear over their ordinary apparel, or over a cassock, black or coloured, a white linen garment, with sleeves." This is what the Dean of Wells thinks "is in harmony with the principles for which all parties severally contend." But what are the facts ? As we under- stand the matter, the Ritualists and the great bulk of the High-Church party are agreed as to "the principles" which underlie the controversy on the Ornaments Rubric. Those principles are mainly two,—first, that the celebration of the Eucharist, as the highest act of Christian worship, should be dignified by the use of a special vestment ; secondly, and not less important, that this vestment should be that which has the prescriptive sanction of Christendom, East and West, from the earliest times, and which, moreover, is a visible symbol of continuity between the Church of England of to-day and that of pre-Reformation times. Dr. Plumptre's eirenicon violates both these principles. It violates the first, because it really does not provide any special Eucharistic vest- ment at all ; even the use of the stole is left optional. Sur-

plices without sleeves are by no means uncommon even among choristers. The " with or without sleeves," therefore, is simply making confusion worse confounded, by suggesting a difference where there is really none. Dr. Plumptre may, indeed, say that, under cover of the ambiguity, an ingenious man might have a piece of white linen cut in the shape of a chasuble. Yes, but the ambiguity would also enable him to officiate in an alb, which would probably give as much offence to the ignorant as a coloured chasuble. Surely this is an odd way of mending the alleged ambiguity of the Ornaments Rubric. And then the proposed Canon would permit the use of Dr. Plumptre's nondescript " garment " with or without a cassock. Imagine a long-legged priest officiating in a chasuble over bare trousers! And when the Dean speaks of a "linen cope," we must remind him that a " cope " such as he describes is an innovation in Ecclesiastical vestments. Historical words cannot be divorced from their historical meaning by a Canon of Convocation ; and nobody who knew anything at all about the subject could delude himself with the notion that he was wearing a cope when he had Dr. Plumptre's sleeveless "white linen garment" over his shoulders, any more than a soldier in a Highland regiment would imagine that he was wearing a kilt by winding a white linen cloth round his waist and thighs. We repeat, therefore, that Dr. Plumptre's eirenicon provides no distinctive Eucharistic dress at all. He forgets that when "a distinctive Eucharistic vestment "is demanded, what is meant by Ritualists is the recognised historical vestment, and not any kind of vestment which the ingenuity of a tailor might invent. Bishop Montague makes mention of a clergyman in his diocese who celebrated the Eucharist "in a huntsman's coat." That would be distinctive enough, but it would hardly be accepted as an eirenicon by those who demand a distinctive dress for the Holy Communion.

Dr. Plumptre's Eirenicon, in the second place, does not offer even a plausible pretext for satisfying the second principle on account of which High Churchmen and Ritualists value the Ornaments Rubric. We are not giving any opinion of our own on the subject ; we are only stating facts, and the patent fact is—so patent, that we wonder how it has escaped Dr. Plumptre's observation—that the chief value of the Ornaments Rubric, in the eyes of those who contend for its plain, grammatical interpretation, is that it sanctions a ritual which is a visible bond of union with the rest of Christendom and with the ancient English Church. Dr. Plumptre's Eirenicon takes no account of this at all. He invents a brand-new ritual, which would dissever the future Church of England not only from the rest of Christendom, and not only from the ancient English Church, but even from the present Church of England. The chasuble is commonly spoken of as the Euchar- istic vestment ; but, in matter of fact, the Eucharistic vest- ment really includes not only the chasuble, but also the alb, amice, and stole. The chasuble, and also the cope, are worn over either an alb or a surplice, but are never worn in the way suggested by Dr. Plumptre. We have little doubt that all parties would prefer the surplice and stole and cassock to the fancy alternative, without shape or name, suggested by Dr. Plumptre. It is likely also that both High Churchmen and Ritualists, to say nothing of ordinary historical students, would dispute several of the premisses from which Dr. Plumptre deduces his conclusion. We agree with him that it is an "absolutely un- tenable interpretation of the Ornaments Rubric" to say "that it describes an ideal maximum of ritual, and permits any extent of departure from that ideal on the side of defect." But it is new to us that any such absurd interpretation has ever been suggested as even tenable. What we have seen argued is that the Ornaments Rubric sanctions, as a maximum, the full ritual in legal use in the second year of Edward VI. ; and that Canons, Advertisements, and Bishops' Visitation inquiries insist, as a minimum, on the surplice in parish churches, and the cope in cathedral and collegiate churches. And this is a principle of interpretation which appears to us to be not only tenable, but capable of historical demonstra- tion. Not to multiply instances, the Prayer-book plainly pro- vides for .the celebration of the Holy Communion on every Sunday and festival throughout the year. But both the Advertisements and one of the Canons, and also Episcopal Visitations, sanction an elastic minimum of less frequent cele- brations. It is, further, an assumption to say that " the uniform usage of the Church of England from A.D. 1662 to a com- paratively recent period is at variance with what seems, prima facie, the natural and obvious interpretation" of the Ornaments Rubric. It has not been proved that there were no exceptions at all to this "uniform usage." There might have been many such exceptions scattered all over the country, without leav- ing any record behind them. There are many such cases now, of which Dr. Plumptre knows nothing, and some, probably, which are unknown even to the President of the English Church Union. There was no Church Association in those days to prosecute the wearers of obnoxious vest- ments, and the circulation of knowledge between the different parts of England was slower than it is now between London and Calcutta. It is a rash assumption, therefore, to say that the condemned vestments were not in use in any parish in England from 1662 to our own time, simply because we have no record of their use. It is probable that the use of them was rare. They were expensive, and, pace Dr. Plumptre and the Ridsdale judgment, they were not practically obligatory, for they were not, any more than organs and dif- ferent sets of altar vestments, in the category of vestments which the parishioners were bound to provide. And, more- over, the objection would prove too much. The stole has been declared illegal, but it has been in use ever since 1662. The cope is doubtless legal, but there is hardly any record of its use in the interval named by Dr. Plumptre, save at the coronation of the Sovereign, and in Durham Cathedral down to Bishop Warburton's time.

We have probably said enough to prove to the Dean of Wells that his good intentions are more apparent than the utility of his Eirenicon. It is not from any natural bias in favour of our own offspring, but from a careful consideration of the facts of the case, that we consider the eirenicon lately suggested by ourselves to be the most practicable solution that has yet been offered. Mr. Gladstone, in his recent reply in the House of Commons to Mr. Hubbard's question about Mr. Green's release, plainly suggested to the Bishops to take action in the matter ; and if those "high authorities" are really anxious to put an end to what is at once a scandal and a peril to the Established Church, they should lose no time in taking the Premier at his word. His successor may not be equally well informed and well disposed to aid in the work of con- ciliation.