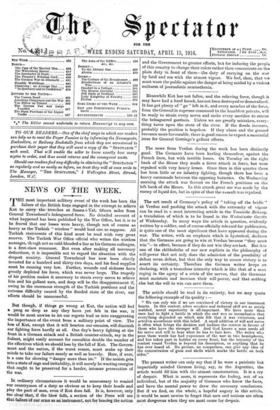 Page 1, 15 April 1916 — Meanwhile Nut has not fallen, and the relieving force, though
Close

Meanwhile Nut has not fallen, and the relieving force, though

it may have had a hard knock, has not been destroyed or demoralized. It has got plenty of " go " left in it, and every member of the force, from the General in supreme command to the humblest private, will be ready to strain every nerve and make every sacrifice to rescue the beleaguered garrison. Unless we are greatly mistaken, every- thing turns upon the state of the river. If the floods increase, probably the position is hopeless. If they abate and the ground becomes more favourable, there is good reason to expect a successful issue for General Gorringe's gallant efforts.