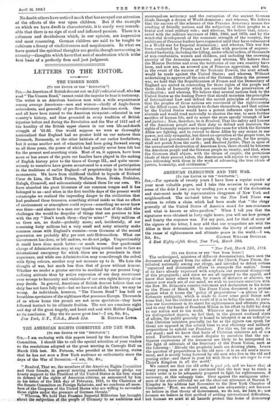 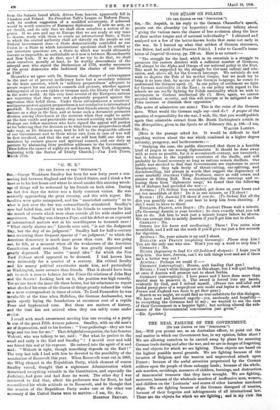 AMERICAN CLERGYMEN AND THE WAR.

(To TRH EDITOR OP THU SPECTATOR...1 Sin,—For upwards of twenty years I have been a regular reader of your most valuable paper, and I take this occasion to express my sense of the debt I owe you by sending you a copy of the declaration and statement made by representative clergymen of New York and neighbourhood. The enclosed letter to the New York Times wee written to refute a claim which had been made that "the clergy generally of the United States of America stand for non-resistance and what is known as ultra-pacifism." When I tell you that the signatures wore obtained in forty-eight hours, you will see how prompt and hearty the response was. For my part, and for that of many of the signers of the letter, I may add that our sympathies are with the Allies in their determination to maintain the liberty of nations and the cause of righteousness and ultimate peace in the world.—I am.

[To TILE EDITOR 07 TEE • Nair Youx Tutes.'1 The undersigned, ministers of different denominations, have aeon the document, and appeal from the office of the Churoh Peace Union, dis- tributed nationally among our clergy, and intended to defeat certain 'organized and determined efforts to stampede the nation.' Some of us have already expressed with emphasis our personal disapproval of this propaganda ; and since we are all opposed to the appeal, and know that many others whom, by reason of distance or absence, we cannot now reach are of our mind, we wish to associate ourselves with the Rev. Dr. Stimson's counter-statement and declaration in his letter to the Times of March 18. The Peace Union document is a pretzel' against what it terms the 'policy of preparedness '—a phrase of un- fortunate ambiguity, which is made to cover some good things and some bad ; but the evident net result of it is to befog the issue, to para- lyse our Government in its stand for righteousness and ultimate peace. and to stay the hands of President. Wilson in his effort to fulfil his duty to our nation and to the world. Whatever may be the intention of its distinguished signers, we feel that, in the present confused state of affairs, the public generally is bound to interpret it as an indication that Christian ministers generally (so far as the signers can speak for them) are apposed in this critical time to real efficiency and military preparedness to uphold our President. For this we, for our part, do not stand ; and we know that hosts of Christian ministers are of otzs mind. Furthermore, we cannot disguise to ourselves that the am- biguous expressions of the document are likely to ho interpreted in the light of editorials of the Secretary of the Peace Union, such as the following: Already the prophetic souls are drawing plans. Leave the question of preparedness to the old men—it is an old men's move- ment, and is mostly being fostered by old men who live in the old and sveging order—and throw in your lot with those who are eager to rear Christ's Kingdom in all the

We cannot see that the old order Is past yet, and we know that ail many young men as old are convinced that the best way to reach a better order is to be adequately prepared to fight for righteousness, if necessary, at this unhappy time. Over against the ambiguous utter- ance of the above editorial we sot the clear-cut utterance of Darwin I'. Kingsley in his address last November to the New York Chamber of Conamerter: 'First, we should arm, and arm adequately ; not because we believe in that theory of Government, we do not, we hate it ; nor because we believe in that method of settling international difficulties. but because we most at All hazards protect this home of democracy from the Satanic brood which, driven from heaven, apparently fell in Flanders and Poland. Ex-President Taft's League to Enforce Peace, with its modest suggestion of a modified sovereignty, if achieved would be worth centuries of European diplomacy. If now we arm, as we should, and do only that we shall show ourselves a nation of in- grates. If we arm and say to Europe that we are ready at any time to disarm, ready with them to create an international State, a State in which the central authority shall act directly on the people as our Federal Government does—a State democratically controlled as our Union is—a State in which international questions shall be settled as our interstate questions are, a State in which war would ultimately become as impossible, as unthinkable as it now is between Massachusetts and New York. If we do that, aye ! if we try to do that, we shall show ourselves, morally at least, to be worthy descendants of the intrepid men who signed the Declaration of 1776, worthy successors of the great democrats who fashioned the charter of our liberties in 1789?

Meanwhi e we agree with Dr. Stimson that charges of extravagance

• in the past or of present inefficiency have but a secondary relation to the main question, which is 'military preparedness' adequate to secure respect for our nation's counsels and protests, whether against infringement of its own rights or trespass upon the liberty of the weak in the wider world. At this very time several of the European nations are regretting that they were not adequately prepared against the aggression that befell them. Under these circumstances a ministers' ambiguous protest against preparedness is not conducive to international goodwill. It is regarded by many of our best friends among the fighting nations as a slap in the face, and at home such a document promotes division among churchmen at the moment when they ought to unite on the first visible and practicable step toward averting war hereafter. Perhaps our fellow-ministers who have signed the appeal will pardon us for believing that the decision as to what form our preparedness shall take may, as Dr. Stimson says, best be left to the responsible officers of our Government and to those whose own lives in case of war will be first involved, and that the rest of us will best fulfil our duty as ministers by earnest prayer and spiritual counsel, and our duty as patriots by abstaining from profitless addresses to the Government."