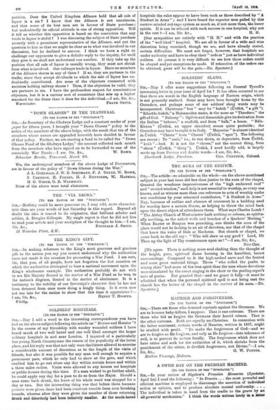 [To nth EDITOR ON TEl " SPECTATOR.1

SIEL,—May I add a word to the interesting correspondence you have had on the above subject following the article on" Heroes and Heroics "? In the course of my friendship with sundry wounded soldiers I have heard much of two well hated and one well liked amongst the larger military hospitals in and near London. I inquired of a particularly fine young North Countryman the reason of the popularity of the latter place, and his reply was that not only were the Sisters allowed to exercise a considerable amount of discretion as to the length of the visits of friends, but also it was possible for any man well enough to acquire a permanent pass, which he only had to show at the gate, and which enabled him to go out alone any day within certain hours and within a three miles radius. Visits were allowed to any houses not hospitals or public-houses during this time. If a man wished to go further afield, he could apply any day for a pass to do so from the Major. Should a man come back drunk, the leave of his whole ward was stopped for a day or two. But the interesting thing was that before those humane permits were given there had been constant trouble from men breaking hounds, whereas after they were given the number of those returning drunk and disorderly had been infinitely smaller. At the much-hated

hospitals the rules appear to have been such as those described by "A Student in Arms " ; and I have found the superior men galled by this narrow-minded red-tape system as much as, if not more than, the leaser spirits. If it can be relaxed with such success in one hospital, why not [Our sympathies are entirely with "H. H." and with the practice of the " well-liked " hospital We are all in favour of a wide and wise discretion being exercised, though we see, and have already stated, certain difficulties. We must not forget, however, that hospitals are under authority and have to obey their " orders" just as have individual soldiers. At present it is very difficult to see how those orders could be obeyed and yet exceptions be made. If relaxation of the orders can be obtained, great will be the gain.—En. Spectator.]