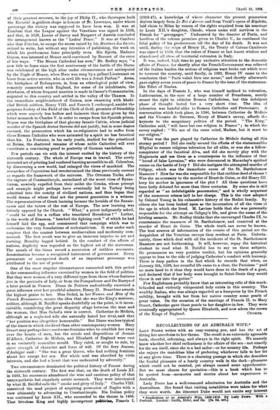 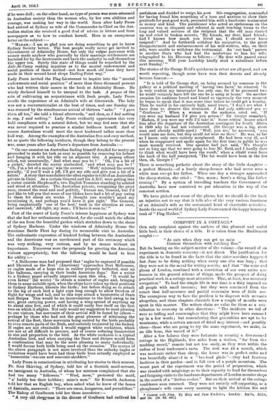 RECOLLECTIONS OF AN ADMIRAL'S WIFE.*

LADY Poona writes with an easy-running pen, and has the art of fitting her anecdotes to her theme. The result is an extremely agreeable book, cheerful, informing, and always in the right spirit. We scarcely know whether her chief enthusiasm is for affairs of the sea—not exactly for the sea itself, since she is a bad sailor—or for country life. Perhaps she enjoys the matchless bliss of preferring whichever falls to her lot at any given time. There is a charming passage in which she describes the fearful pleasures of a lonely country walk in the dark—pleasures which could not be resisted, yet always caused some apprehension. But we must choose for quotation—this is a book which has to be quoted from—memories and stories about her experiences in Australia.

Lady Poore has a well-reasoned admiration for Australia and the Australians. She found that visiting notabilities were taken for what they were worth. An itinerant Duke would not excite any interest • Recollection of as Admirers Wife, 1903-1910. By Lady Poore. With a Portrait. London : Smith, Elder, and Co. Va. iltL net.]

If he were dull ; on the other hand, no type of person was more esteemed in Australian society than the woman who, by her own abilities and courage, was making her way in the world. Soon after Lady Poore had arrived at Sydney as wife of the Commander-in-Chief on the Aus- tralian station she received a good deal of advice in letters and from newspapers as to how to conduct herself. Here is an anonymous letter on the subject :— " MADAN,—I am so glad you are doing something to get to know Sydney Society better. _ The best people really never get invited to Government or Admiralty House, but only the vulgar parvenus with money made anyhow who generally by their marriage settlements are bartered for by the lieutenants and have the audacity to call themselves the upper ten. Surely this state of things could be remedied by the Aide-de-Camp making inquiries as to the mental endowments and social position of those invited—not how much old brass they have made in their second-hand shops Darling Point way."

Lady Poore invited the Flag-Lieutenant to inquire into the "mental endowments and social position" of more than three thousand persons who had written their names in the book at Admiralty House. He wisely declared himself to be unequal to the task. A propos of the arts of cultivating an acquaintance with fresh people, Lady Poore recalls the experience of an Admiral's wife at Greenwich. The lady was not a conversationalist at the best of times, and one Sunday she was stunned by the simultaneous arrival of thirteen "subs." "I gave them all tea," she told a friend afterwards, " and then, as I had nothing to say, I said nothing." Lady Poore evidently appreciates this very bold compliance with a natural defect, but we may feel sure that she was never required to practise a similar boldness herself. And of course Australians would meet the most backward talker more than half-way. Among the examples of the Australian free-and-easy method, let us quote the following incidents, though they belong to the present -war, some years after Lady Poore's departure from Australia :—

"On one occasion an Australian finding himself detailed for sentry-go proceeded to make his task as easy as possible by removing his helmet and hanging it with his rifle on an adjacent tree. A passing officer asked, not unnaturally, And what may you be ? " Oh, I'm a bit of a picket,' drawled the sentry unabashed, and what may you be ? ' Oh, Pm a bit of a major,' was the answer. Well,' rejoined the sentry genially, if you'll "wait a jiff, I'll get my rifle and give you a bit of a salute. A story that scandalises the ultra regular is told of an Australian private in Cairo. As a certain General and his A.D.C. were getting into EL motor outside Shephcard's, two English Tommies standing by saluted and stood at attention. The Australian private, recognising the great man, crossed the road and said politely, Excuse me, General, but I'd just like to tell you that some of our blokes have had a bit of pay owing to them for about six weeks. I thought you wouldn't mind my mentioning it, and perhaps you'd have it put right.' The General, being emphatically one of the best,' took in the situation at once, and answered, All right, my man ; I'll have it seen to.'"

Part of the sesret of Lady Poore's intense happiness at Sydney was that she had her enthusiasms combined, for she could watch the affairs of the sea from the beautiful garden which stretches down to the shore of Sydney Harbour. Under the windows of Admiralty House the American Battle Fleet lay during its memorable visit to Australia. The enthusiastic expression of kindred feeling between the Australians and the Americans was an unrehearsed part of the ceremony which was very striking, very curious, and by no means without its importance. Numerous were the proposals for greeting the American visitors appropriately, but the following would be hard to beat for oddity :— " A Melbourne man had proposed that 'eagles be captured if possible and liberated as the fleet ' (American) 'approaches Port Melbourne, or eagles made of a large size in rubber properly ballasted, sent up like balloons, carrying in their beaks American flags.' But a writer to a Sydney paper actually improved upon this idea. It would be even better' (he wrote) to obtain a number of eagles and, bringing them to some suitable spot, when the ships have taken up their positions in Sydney Harbour, liberate the birds ; but before doing so to attach to the leg of each bird a light rope long enough to allow freedom of flight for wings and tail, and to this rope attach a bannerette of Stars and Stripes This would be no inconvenience to the bird owing to its size, great carrying power, and having a wing-spread of anything up to about nine feet, and of which it could easily free itself on the first tree on which it alights. Not only would my suggestion be most pleasing to our visitors, but souvenirs of their arrival will be found by others— perhaps by those who had not the great pleasure of witnessing the arrival of the fleet, these souvenirs being carried by the birds probably to even remote parts of the Bush, and certainly treasured by the finders. If eagles are not obtainable I would suggest white cockatoos, which are not at all difficult to procure, and of Course reducing bannerettes in size and proportion to the bird. As the white cockatoo is a typical Australian bird, and when carrying the Stars and Stripes would form a combination that may be the more pleasing to many individually, I would favour both birds being used on the occasion.' The syntax of the above paragraph is not more involved than the unlucky eagles or cockatoos would have been had these birds been actually employed as bannerette '-wavers and souvenir-shedders."

Lady Poore is conscientious in attributing her stories to their sources. Dr. Scot Skirving, of Sydney, told her of a Scottish maid-servant, an immigrant to Australia, of whom her mistress complained that she had too many "followers," "Wed, mom," protested the maid, "a' buddy hes their hobbies ; mine's men." Sir Kenneth Anderson told her that an English boy, when asked what he knew of the fauna of Australia, answered : "There are emus, kangaroos, and peccadilloes." The-Bishop of Goulbourn told her these anecdotes

"A very aelal derma= in the diocese of Goulbum had outlived his usefulness and decided to resigo his poi, Hie congregation, remorseful for having found him something of a bore and anxious to show their Fmtitude for past good work, presented him with a handsome testimonial in money and kind. The parishioner who acted as spokesman on the occasion was so eloquent and referred in such touching terms to the long and valued services of the recipient that the old man starte I up and cried in broken accents, My friends, my dear, kind friends, had I known how much you loved me, I should never have resigned 1' And he forthwith withdrew his resignation, to the great disappointment and embarrassment of his well-wishers, who, on their side, were unable to withdraw the testimonial. An ' out-back ' parson in another State who had had the misfortune to lose his wife,

telegraphed to his Diocesan as follows My dear wife passed away this morning. Will your Lordship kindly send a substitute before next Sunday.'" The stories of Sir George Reid's quickness in retort are all good, and are worth repeating, though some have won their deserts and already become famous :— " It is told of Sir George that, on being accused by someone in the gallery at a political meeting of having two facts,' ho retorted, is very evident my interrupter has only one, for if he possessed two he would certainly have left the one he is using at home.' On another occasion his audience booed and hissed co vigorously the very moment he began to speak that it was seine time before ho could get a hearing. Then he wailed in his curiously high, nasal tome, 'I don't see what I have done to deserve this treatment I had only addressed you a I " Gentlemen." ' When a woman in the audience cried out, If you were my husband I'd give you poison ! ' Sir George remarked,

Madam, if you were my wife I'd take it.' Some critical hearer asked him after the departure of the Australian contingent for South Africa in 1900 why he had not volunteered. (Sir George was a big, stout man and already middle-aged.) 'Well, you see,' he answered, you would miss me here, but they would not miss me there.' He was, as far as I know, only once entirely nonplussed. He had been very ill, an I when he reappeared and spoke again for the first time in publio he was most warmly received. One speaker had just said, 'We thought not so long ago that we were going to lose Mr. Reid, and .I hardly dare to think what would have been the result,' when a ribald voice front the back of the hall interjected, The fat would have been in the fire then, eh, Georgie ? ' "

There is something pathetic about the story of the little daughter — a perfect Miranda—of a lonely sheep-farmer who had never seen a white man except her father. When one day a stranger approached the sheep-station, she cried : "See, mum ; here's a thing like father coming I " By a system of travelling teachers the Government of Australia have now contrived to put education in the way of the remotest settlers.

We have picked out some of the plums, but we should do the book an injustice not to say that it tells also of the very various functions of an Admiral's wife ELS the ceremonial head of charitable activities. Inside the naval world of Sydney Lady Poore earned the happy honorary rank of" Flag-Mother."