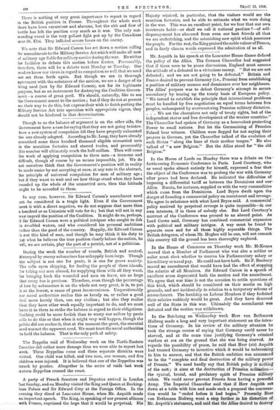 Mr. Asquith in his speech at the Lancaster House dinner

defined the policy of the Allies. The German Chancellor had suggested that if there were to be peace discussions, England must assume the attitude of a defeated to a victorious enemy. "But we are not defeated ; and we are not going to be defeated." Britain and France desired to prevent Germany (i.e., Prussia) from establishing a position of military menace and dominance over her neighbours. The Allies' purpose was to defeat Germany's attempt to secure ascendancy by tearing up the treaty basis of European policy. "We intend to establish the principle that international problems must be handled by free negotiation on equal terms between free peoples, unhampered by overmastering Prussian military dictation. . . . We are the champions not only of treaty rights, but of the independent status and free development of the weaker countries." The Chancellor had spoken of Germany as a benevolent protecting Power to small nations. But let the Germanizing of Prussian Poland bear witness. Children were flogged for not saying their prayers in German, yet the Chancellor talked of the evolution of such States "along the lines of their mother tongue." He also talked of "a new Belgium." But the Allies stood for "the old Belgium."