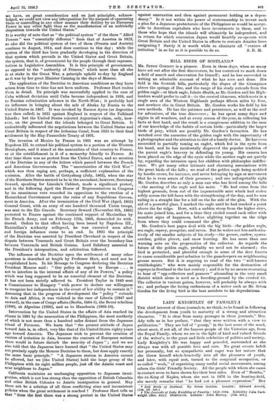 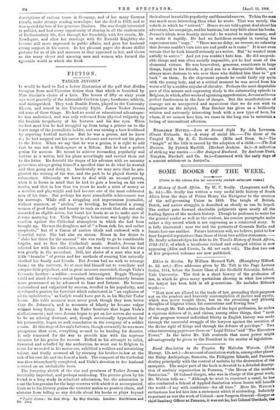 LADY KNIGHTLEY OF FAWSLEY.t TEE chief interest of these journals

is, we think, to be found in following the development from youth to maturity of a strong and attractive character. "It is clear from many passages in these journals," Mrs. Ady tells us in her preface, "that they were written with a view to publication." They are full of "gossip," in the best sense of tho word, about most, if not all, of the famous people of the Victorian age, from the Royal Family, whom we see in the light of kind and valued friends of the writer's, to the great and little celebrities of politics and society. Lady Knightley's life was happy and peaceful, surrounded as she always was with all possible love and care. No great events befell her personally, but so sympathetic and eager was her nature that she threw herself whole-heartedly into all the pleasures of youth, and later, with equal zest, turned to the congenial occupation, or so-called "work," of organizing many useful social movements, among others the Girls' Friendly Society. All the people with whom she came in contact seem to have shown her their best sides. Even of" Bombs," the ex-King of Naples, whom she met in 1876 in the hunting-field, she merely remarks that "he had net a pleasant expression?' Her

descriptions of various tours in Germany, and of her many German friends, make strange reading nowadays ; but she died in 1913, and so was spared the loss of her generous illusions. She was deeply interested in politics, and had every opportunity of sharing in all the excitements of Parliamentary life, first through her friendship with her cousin, Mr. Nowdegate, and after her marriage with Sir Rainald Knightley she became still more 9ngroased in public affairs, and gave her husband strong support in his career. In her pleasant pages she draws skilful pictures for us of life and manners as they appeared to her, and shows us the many clever and amusing men and women who formed the agreeable world in which she lived.