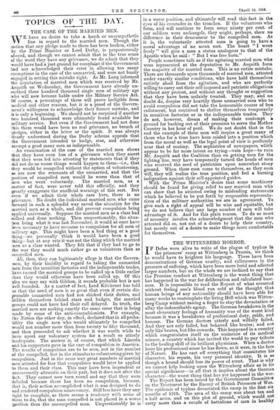 THE CASE OF THE MARRIED MEN.

WE have no desire to take a harsh or unsympathetic • line in regard to the married men. Though the notion that any pledge made to them has been broken, either by the Prime Minister or Lord Derby, is preposterously absurd, and .though we cannot admit that in the true sense of the word they have any grievance, we do admit that they would have had a just ground for complaint if the Government had not acknowledged their error in allowing too many exemptions in the case of the unmarried, and were not busily aneiteed in setting this mistake right. As Mr. Long informed 0 the deputation of Married men which was received by Mr. Asquith on Wednesday, the Government have already un- earthed three hundred thousand single men of military age who will now become liable under the Military Service Act. Of course, a percentage of these will prove ineligible from medical and other reasons, but it is a proof of the Govern- ment's willingness to acknowledge their former mistake, and a is only a beginning. We should not be surprised if another two hundred thousand were ultimately found available for military service. But even if the Government had not done this there would have been no real grievance, no breach of pledges, either in the letter or the spirit. It was always !dearly understood during the Derby scheme appeals that the Government intended to badge, star, and otherwise exempt a good many men as indispensable.

- An examination of the case of the married men shows that they have even less of a grievance when they assert that they were led into attesting by statements that if they (aid not do so worse things would happen to them—i.e., that they would be compelled without the option of volunteering, as are now the remnants of the unmarried, and that the position of compelled men would be worse than that of men who went voluntarily. The married men, as a matter of fact, were never told this officially, and they greatly exaggerate the unofficial warnings of this sort. But even if we admit their whole case here, there is no grievance. No doubt the individual married men who came -barward in such a splendid way saved the situation for the married men as a whole, and did prevent compulsion being applied universally. - Suppose the married men as a class had sulked and done nothing. Then unquestionably, the situa- fion being what it was last November, it would at once have been necessary to have recourse to compulsion for all men of military age. This might have been a bad thing or a good thing—we personally, think it would have been a good thing—but at any rate it was not the thing which the married men as a class wanted. They felt that if they had to go to the war they would much rather go as volunteers than as compelled men.

. Ali, then, they can legitimately allege is that the Govern- men, by their timidity in regard to taking the unmarried men from the munition factories and the indispensable trades, • have caused the married groups to be called up a little earlier than they would otherwise have been called up. Of this plea we may say with Gibbon, it sounds probable but is not well founded. As a matter of fact, Lord Kitchener has told 7as that the need of men is so great that even if certain dis- pensable unmarried men had not shirked their duties, and bidden themselves behind stars and badges, the married groups could not have had their call delayed. In truth, the married men are making exactly the same error that is being made by some of the anti-corapulsionists. For example, the Nation the other day, in effect, declared that in all proba- bility the single men who would ultimately be compelled would not number more than from twenty to fifty thousand, and then proceeded to ask whether it was worth while to have upset our voluntary system for a result so utterly inadequate. The answer is, of course, that which Lincoln and his supporters gave in the case of compulsion in America.

- The results of compulsion are to be seen, not in the number *I the compelled, but in the stimulus to volunteering given by eompulsion. Just in the same way great numbers of married men attested for fear that compulsion would later be applied to them and their class. This may have been imprudent or unnecessarily altruistic on their part, but it does not alter the tact. They cannot now turn round and say that they were deluded because there has been no compulsion, because, that is, their action accomplished what it was designed to do and rendered compulsion unnecessary. Still less have they any right to complain, as there seems a tendency with some of them to do' that the man compelled is not placed in a worse ppsition than the uncompelled man. Unquestionably he is in a worse position, and ultimately will read this fact in the eyes of his comrades in the trenches. If the volunteers who form, and will continue to form some ninety per cent. of our soldiers were archangels, they might, perhaps, show no difference in their demeanour to the compelled men. As it is, the voluntarily attested man is going to have a moral advantage of no mean sort. The boast "I went freely" will give a man a status analogous to that of the Apostle when he said : "But I was free born."

People sometimes talk as if the agitating married men who were represented at the deputation to Mr. Asquith form the majority of the married men. This is an entire mistake. There are thousands upon thousands of married men, attested under exactly similar conditions, who have held themselves entirely aloof from the agitation, and who are perfectly willing to carry out their self-imposed and patriotic obligations without any protest, and without any thought or suggestion that they have been unfairly treated. They may, and no doubt do, despise very heartily those unmarried men who to avoid compulsion did not take the honourable course of free enlistment, but contrived to shelter themselves temporarily in munition factories or in the indispensable trades. They do not, however, dream of making their contempt a ground for backing out of their promises to serve the Mother Country in her hour of peril. We do not doubt that in the end the example of these men will inspire a great many of those who for a time have been misled into a position which from the moral as well as the legal point of view is perilously near that of mutiny. The sophistries of newspapers, which appear to be far more intent on trying—vain hope—to ruin Mr. Asquith and the Coalition than on getting men for the fighting line, may have temporarily turned the heads of men who received the seed of patriotism upon somewhat stony ground. When these men come to themselves, as they soon will, they will realize the true position, and feel a burning indignation against their self-appointed guides. With the Prime Minister's desire that some machinery should be found for giving relief to any married man who can show that he attested owing to misleading statements which he believed to be put forth by responsible representa- tives of the military authorities we are in agreement. To give such a right of appeal will be wise and equitable, but we do not believe that any large number of men will take advantage of it. And for this plain reason. To do so must of necessity involve the acknowledgment that the men who attested did so, not out of a desire to help their country', but merely out of a desire to make things more comfortable for themselves.